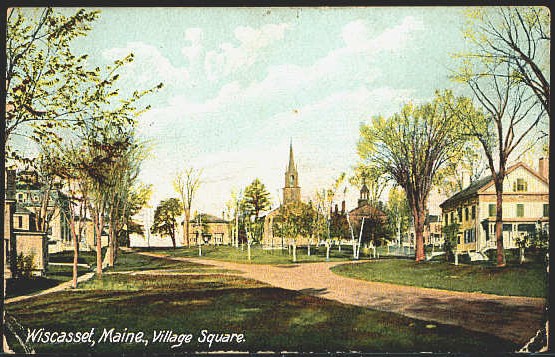 Turn of the Century Wiscasset, from the period when the Declaration was in the home of Town Clerk Sol Holbrook.

Another case involving "lost" public documents is playing out in a Virginia court, the type of case we both hate to see and expect to see more of in the days ahead. It pits a public authority against an innocent collector, the latter standing to lose hundreds of thousands of dollars as a result of a purchase made in good faith. There must be a better way.

Today it is in the possession of Richard L. Adams of Virginia. Obviously, he believes he is the owner. He would not have paid $475,000 to borrow it for a few months. Exactly what happened to it between 1776 and 2008 is not certain, but here is what appears to have occurred over the last hundred years or so. It apparently was held by Sol Holbrook, a watchmaker by trade who was Wiscasset's Town Clerk from 1886-1929. It may sound odd, even questionable, that a town clerk would have had important public papers in his home, but those of us who have lived in small town New England will not be surprised at all. These towns would have had few, if any, public facilities, and no place to store the reams of public papers that accumulated over a century and a half. The one person who would be most likely to ever need any of these records would be the Town Clerk, so it is quite natural that they would end up in his house. And, while there might be some call for town minutes or the like from the past decade or so, the need to access records from the distant past would be negligible if not totally nonexistent. Most likely, the records, which included this Declaration of Independence, made their way to Holbrook's attic quite early in his town clerking career, and never saw the light of day again.

After Holbrook died, no one came to reclaim the records for the town. It is likely after all of those years no one knew what he had, and no one cared. So the records ended up in the attic of Holbrook's daughter, Anna Plumstead. It's doubtful either she or her father ever had any idea there was something valuable in there. When she died in 1994, her belongings were put up for auction, and that was when it became clear there was something of value. At that 1995 estate auction, it sold for $77,000. Since then, it has gone through a couple of private sales, at one time being held by London bookseller Simon Finch, before making its way to Adams. Now, Adams wants to sell it, and the State of Maine, which somehow missed the auction in Maine in which it was sold, has hightailed it down to Virginia to seize the copy.