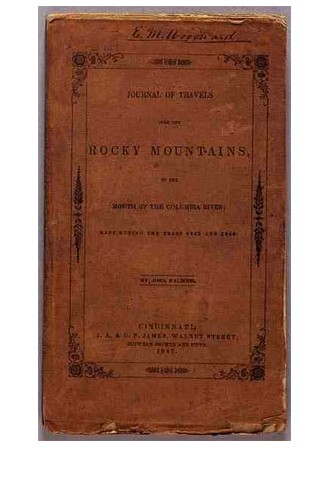 Image from the AE Database


Now that we’ve discovered this title, we do a specific “Primary Search” and come up with 28 records just for Palmer. With these, we learn a lot about Joel Palmer and his book. Particularly helpful are Edward Eberstadt’s and Ernest Wessen’s (Midland Notes) descriptions. We find that Palmer provided the only contemporary narrative among the 3,000 sojourners who traveled to Oregon in 1845, thereby doubling the settler population of that territory. Palmer later returned east to write and publish his book. He intended that it be available as a guide for immigrants in 1847, but he received only a few dozen copies in time. The rest came for 1848, and some of those copies have the 1847 crossed out and 1848 entered by hand. The hand was Palmer’s as he wanted buyers to know it was up-to-date.

Unfortunately, this was such a useful guide that most copies were worn out. Few survive. First editions are considered exceedingly rare. Howes, in his USiana, rates it a “d,” the second highest classification behind “dd,” which is used for such items as The Declaration of Independence. This is clearly a valuable book, more so than Parkman’s Oregon Trail (a “c” for Howes). An outstanding copy was being offered for $650 all the way back in 1939. By 1986, a not quite so outstanding copy was priced at $3,250.

We went to Abebooks.com to see what’s available today. There were 18 copies, but 17 of them are recent reprints, all priced for reading. But number 18 appears to be a gem. It is offered for $2,800 by Old West Books of Arlington, Texas. However, the date is confusing. It is described as 1848. According to our AED record from H.V.Jones, this 1847 first edition was reprinted in 1850, 1851, and 1852. Nowhere in our records does an 1848 edition appear. Is this one of those hand-written “1848’s?” More investigation with the seller to resolve this discrepancy is recommended before making a purchase.

Now it’s back to our list to see what else predates 1860. Next up comes something called Nebraska and Kansas… by J.H. Colton. Turns out it’s a map, and what a map. Eberstadt describes it as the first separate map of Kansas and Nebraska, probably one of the earliest with detailed depictions of Montana-Wyoming-Colorado, and delineates many early routes, including the Oregon Trail. I’d love to own this map, but we’re looking for books, so we move on.

The next listing is for Emerson Bennett’s 1847 Prairie Flower. Our entry (from Peter Decker’s catalog of the Soliday collection) doesn’t tell us much about this book other than it has something to do with the Oregon Trail. So, we look up Emerson Bennett, and what we find is a fiction writer, whose titles include Mike Fink. Interestingly, when we look up Howes’ reference to the Prairie Flower, he says that it was “probably written by Sidney W. Moss, who accompanied Hastings to California in 1842, so some of the incidents may be factual.” Compare this to Howes’ comments about Bennett’s next book, Leni-Leoti. Described as a sequel to Prairie Flower in which the hero’s adventures are continued, Howes adds “Written by Bennett himself, hence undiluted fiction.” Is it just me, or does Howes sound less than impressed by Bennett’s writing? As to whether Prairie Flower belongs in an Oregon Trail collection, you can be the judge.