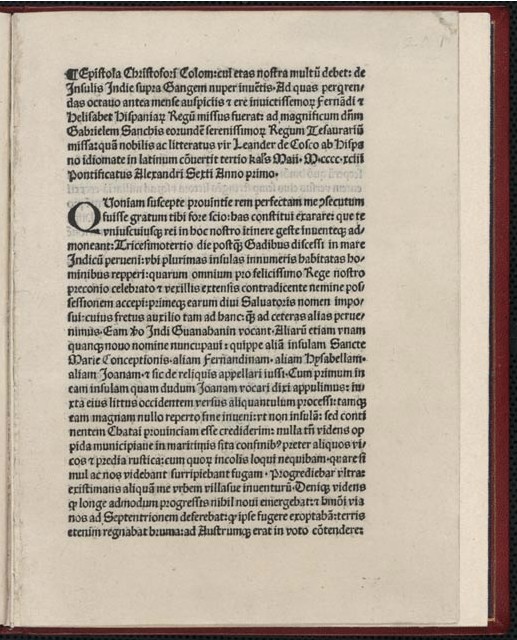 A Columbus letter, on exhibit at the Library of Congress.

An absolutely spectacular exhibition for those interested in printed and written Americana will be opening at the Library of Congress this month. If you will be in Washington, you must go. It is entitled Exploring the Early Americas, and they are dead serious about "early." Much of the featured material would have been considered antiquarian by the time the pilgrims arrived.

The focus is on material given the Library of Congress by Florida collector Jay Kislak. His collection included material pertaining to the southeastern part of what is now the United States, as well as Mexico, Central America, and the Caribbean. For example, there is a Totuguero Box, a Mayan wooden box that includes images and a carved inscription. It dates back to the seventh century. In other words, it was more ancient when Columbus arrived in the New World than Columbus' discovery of that world is today. However, we will concentrate on things more familiar to United States Americans.

The masterpiece of the Kislak collection must be the Columbus letter. This is one of the rare early copies of the report on the New World Columbus prepared for King Ferdinand and Queen Isabella of Spain. He reports on the land and people he found, and naturally, that he claimed all of the territory for Spain. He was a diplomat as well as discoverer. This is a Latin translation published in 1493.

Not part of the Kislak collection, but an earlier purchase is the most important map in the history of America -- the 1507 Waldseemuller world map. This map contains the first reference to the New World as "America." It is likely that Waldseemuller's attaching this name to the land is why it stuck. Interestingly, in his next map, Waldseemuller dropped the "America" name, possibly because he later realized Columbus was the discoverer, not Amerigo, but by then it was too late. The Library of Congress' copy is the only known survivor of the 1507 "America" map.

George Washington was a regular diarist along with being the father of his country. On exhibit is his 1762 edition, partly a printed almanac, and partly blank pages he filled in. With the exception of the Revolutionary War years, Washington kept a diary from 1747 until he died in 1799. The Library of Congress now has 37 of the 41 he kept.

There is a letter to Holy Roman Emperor Charles V from Bishop Bartolome de Las Casas. The Spanish conquistadors were generally a brutal lot, killing and enslaving so many of the natives they found. De Las Casas was given a land grant in Santo Domingo, to which he traveled in 1502. He was appalled by the treatment of the natives he saw, and spent the rest of his life working to improve their lot. Like Washington, he is an American hero.

Of course there is much more on exhibit. The exhibition opens on December 13 in the Great Hall of the Thomas Jefferson Building. For those unable to go, there is an online version, found at http://www.loc.gov/exhibits/kislak/.