In The News: Cannibals, The Potters, Bushwacked 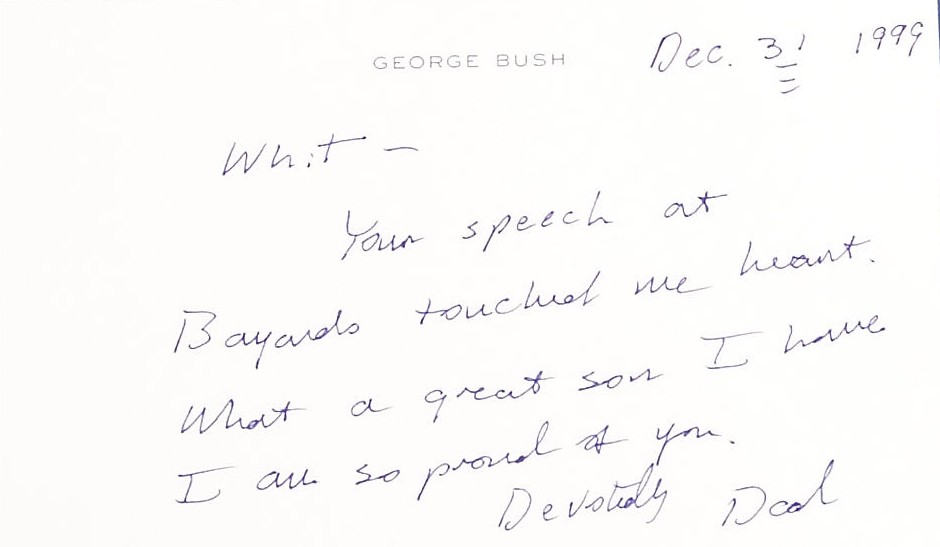 A touching note from the first President Bush to the forgotten son is up for sale.

Proving that authors are most dedicated to their research, aspiring writer Jose Luis Calva was arrested in his home in Mexico City last month for the murder of his girlfriend. Reportedly, parts of her body were found in a closet, cereal box, refrigerator, and, oh no, a frying pan. DNA has since shown the meat in the frying pan to be human flesh, and it matches parts missing from girlfriend Alejandro Galeano's dismembered body. Before you rush to judgment on Mr. Calva, it appears that if the allegations are true, he may simply have been conducting research for his next book. He reportedly told police he is an aspiring horror writer. A manuscript was found in his apartment entitled Cannibal Instincts. This incident will undoubtedly enable Calva to quickly find a publisher and his book will soon be on the bestseller lists. He will receive boxes of letters to his prison cell from women seeking marriage. Calva, who was bloodied in an unsuccessful attempt at escape, is also a suspect in the earlier killing of a prostitute whose body parts had been discovered in a bag on the street, undoubtedly missing a few pieces. A literary Jeffrey Dahmer he is.

As long as we are on the subject of human body parts, Christie's announced the results of a successful auction on October 5 entitled Anatomy as Art. A total of 208 out of 229 lots of anatomical atlases and such sold, bringing in almost $1,450,000. At the top of the list was Hierinn sind begriffen vier büücher von menschlicher Proportion, a 1528 work by Albrecht Durer, wherein the great German illustrator used his mathematical skills to create accurate proportions of the human body. There is no hint whatsoever that Durer ever ate any of his subjects when he was through drawing them.

A Christie's auction of October 25 proved that you can make a lot of money with new books, provided you pick the right one. A copy of the first issue of the first edition of the first Harry Potter book, Harry Potter and the Philosopher's Stone, sold for a remarkable $40,236. This book is all of ten years old. Another $6,141 was spent on Ian Fleming's 1947 pre-Bond poem, Ode to Sister Potter. She was Fleming's nurse when he was stricken with pneumonia. Based on the age difference, we doubt she is Harry's sister.

Divorce is rarely pretty, particularly when famous names are involved. However, it may result in some unexpected collectibles showing up on the market, such as a presidential letter. In 2003, presidential son and brother Neil Bush and his wife of 22 years, Sharon, were divorced. It was messy. Neil Bush admitted to adultery and, according to Sharon, informed her by email of his desire to seek a divorce. What Al Gore wrought when he invented the internet! Neil had something of a checkered past with unsuccessful businesses. His most notable failure was as a Director of Silverado Savings and Loan of Colorado, one of the mega bank failures of the late 1980s, early 1990s. The losses were around a billion dollars, still a substantial sum of money at the time. Bush had to pay $50,000, the taxpayers the rest. Some believe Neil may have considered a run for Governor of Colorado when his brothers were planning similar runs in Texas and Florida, but this scandal ended his political career. However, he continued to do fine personally despite few businesses successes, helped by family friends always able to find suitably well-compensated employment for him.