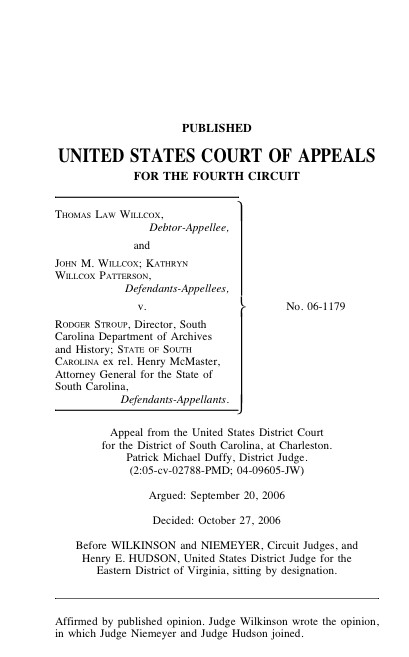 An auction took place in South Carolina at the end of September that highlights two issues in the world of book and manuscript collecting, one legal, one financial. The items in question were a group of Civil War letters, including three from Robert E. Lee. For example, on December 27, 1861, Lee wrote South Carolina Governor Francis Pickens, "The strength of the enemy, as far as I am able to judge, exceeds the whole force that we have in the state." In another, Major William Mullins wrote, "But shall I tell you now of the battlefield? Of the dead hideous in every form of ghastly death: heads off, arms off, abdomens protruding, every form of wound, low groans, sharp cries...convulsive agonies as the souls took flight." This was a collection of clear historic significance, still emotionally wrenching after all of this time.

The collection belonged to one Thomas Law Willcox, gathered from the home of his late stepmother seven or eight years ago. They came to his family long, long ago, through Wilcox's great-great uncle, Confederate General Evander Law. Law secured them ahead of Sherman's army, advancing on South Carolina's capital of Columbia. It wasn't until Willcox one day decided to look through the envelopes he had taken that he realized what he had was something special. Three years ago, he planned to offer them at auction, and so began the legal tangle in this story.

In recent years, many states have aggressively pursued their claims to documents long ago purloined from their archives, even though the current owners were far removed from any such taking. A few years ago, the State of North Carolina was able to secure the return of its copy of the Declaration of Independence, confiscated by a returning Ohio soldier at the end of the Civil War. There is no statute of limitations on these claims. However, the claims have now been extended, and in some states such as Texas recognized by statute, to items that disappeared years ago under unknown circumstances. They were not necessarily stolen. The documents may have been thrown away, sold, given away...who knows? If a state can claim it is/was a state document, it may have a case. Such was the belief of South Carolina, which sued Willcox for the papers. They obtained a restraining order the day before the original sale was to take place.

Willcox, who had invested money in appraisals, promptly filed bankruptcy, which allowed him to contest ownership of the papers in the Federal Bankruptcy Court. He lost there, but won on appeal to the Federal District Court. The State responded by appealing that decision, arguing in September of 2006 before the Federal Appeals Court. There, South Carolina lost again. The Appeals Court ruled in a case such as this, without a clear chain of title, eyewitnesses, and the like, it is necessary to look to the "common law," where, the Court noted, "possession is nine-tenths of the law." That put the burden on the State to prove it owned the documents, either through some evidence of title or recent possession. It could show neither.