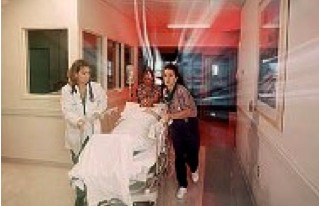 Not the best time for making an emergency bookstore plan.

Early this month I was busy with the daily routine -- you know, crisply processing orders, corresponding with customers and suppliers, doing data entry, hauling boxes of books in and out of the shop, up and down the ladders in the warehouse, rummaging through the auctions, lining up for book sales, thinking about what we were going to do for the holiday season -- when I received a surprise call from my doctor's office. My recent, routine mammogram was suspect, and they wanted to do another.

Within two days, after a second set of images, and a follow-up visit with still more images and an ultrasound, I found myself transmuted from a mostly abstract-intellectual bookseller into a very anxious potential oncology patient, sort of half-hearing what was being said by a series of nurse practitioners, technicians, physicians and surgeons. A biopsy was quickly scheduled, and cancer in the right breast was confirmed. And in what seemed a matter of moments, not days, I realized that I was completely unprepared and had not put in place a robust back-up plan to keep our business going smoothly while I was being treated by all and sundry, with the outcome very much unknown.

As they were wheeling me into surgery I was still reciting a list of usernames and passwords to my husband, many of which existed only in my own mind, and reminding him about the things that needed doing bottom-line every day and trying to remember all of the works-in-progress, the orders that were being held for payment, the missing stuff at the post office, the box where I had quickly stashed some valuable items -- all of the flotsam and jetsam of the business which had just fallen completely off the plate and was lying on the floor of the day surgery.

Now that I'm home, recovering and preparing for a course of radiation therapy (with my breast mostly intact, thanks for asking) and more importantly, still alive, brain entirely functional, and with plans to remain so for the time being, it occurred to me that I might actually want to formulate an action plan so that in the future my business does not hit the dirt if my health does.

I made definitive lists of our accounts, selling sites, and all of their associated passwords and put them in a written master plan for running the business, in the event it has to be taken over temporarily or permanently by somebody else. I started a document on running the bookstore, including daily tasks, processing the orders from each site, getting paid, moving money around among the foreign bank accounts, names of key customers and suppliers, everything I could think of that would be necessary for the business to function in my absence.

When I came back, one of the first decisions was what to tell customers, because a few of their packages were late. Is there some fine line one draws between a full Lyndon-Johnson-style disclosure, or no explanation at all? I handled that one on an individual basis.