Great Hebraica Exhibition at the Rosenbach 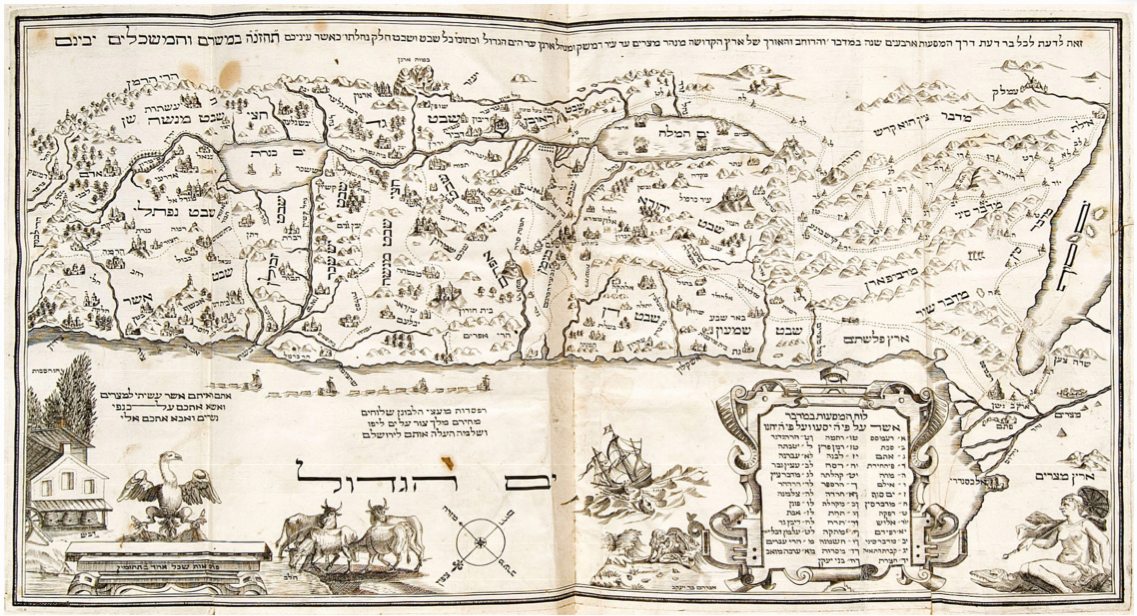 If you ever need to leave Egypt in a hurry, this map of the Exodus could come in handy.

The Rosenbach Museum and Library of Philadelphia will be conducting an exhibition of rare and never before seen Hebrew texts over the coming spring and summer. The exhibition, entitled Chosen: Philadelphia's Great Hebraica, opened March 29 and will run through August 26, 2007. On display will be approximately 60 books, scrolls, and other items gathered from the Rosenbach's collection and those of seven other Philadelphia area institutions. They date from as early as the 11th century.

Chosen helps tell the story of a people -- its culture, experiences, knowledge, art and religion. While there are different subcultures from varied lands represented, they are all tied to the common tradition of the Jewish people founded millennia ago. There are highly decorated and artistic scrolls and books, including a miniature the size of a thimble. Among the items on display are the first printed prayer book in Hebrew, a miniature scroll of the Book of Esther never before seen by the public, possibly the oldest Hebrew Bible in North America, the oldest nearly complete Passover Haggadah in existence, a Torah scroll with eleven commandments (but they don't tell us what the 11th is!), the first depiction of a map of the Exodus, the first book written by a Muslim that was translated into Hebrew, and the first scientific illustration of a liquid-in-glass thermometer.

The dining room in the Rosenbach house/museum has been set up for a Passover seder. Silver, glass and other tableware that was used by the Rosenbach family is used in this display.

The Rosenbach brothers were antiquarians and booksellers of the first half of the 20th century. Philip was more involved with art, while Dr. A.S.W. Rosenbach was one of the giants of bookselling, serving the greatest and wealthiest collectors of his time. His client list included the likes of J. Pierpont Morgan, Harry Widener, Henry Folger, Henry Huntington, and Lessing Rosenwald. Their shop, with the "Doctor" operating the book side, opened near the turn of the century, aided by the inventory of their recently deceased bookseller uncle. They operated the business until they died in the 1950s. Their property and much of their collection/inventory was left to the museum they created. At one time, A.S.W. Rosenbach owned some of the most valuable books in the word -- Shakespeare first folios, even a Guttenberg Bible. However, those were for business. He had two personal collections, one of children's books (started by his uncle), and one of Judaica. He undoubtedly would have appreciated this exhibition at the museum and library which bears his and his brother's name.

To learn more about this exhibition, including hours and directions, go to the Rosenbach website: www.rosenbach.org.