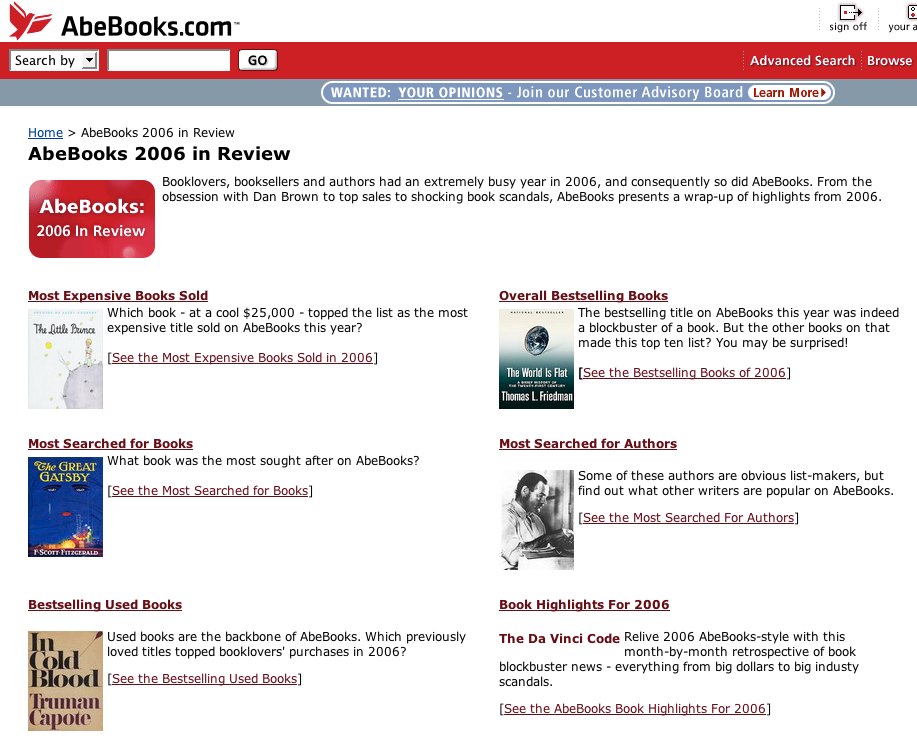 Abebooks has issued its top 10 lists of books sold and searched for in 2006, and the results are fascinating. What makes them so interesting is not just what they say about buyers, but what they say about Abe. These lists can provide booksellers with insights as to what type of material sells, and does not sell, well on Abe, and most likely, the other mass listing sites. Let's take a look.

The top 10 most expensive books is very telling about the type of sales made on the internet. Number 1 is Institutiones Geometricae by Albrecht Durer, sold for $25,000. Runners up are a work by Helen Frankenthaler at $20,000, The Book of Antelopes by Philip Sclater at $17,500, Les Horribles by Andre Derain at $17,000, a Dante collection at $14,347, and an 1815 "second edition" of Lewis and Clark's Travels to the Source of The Missouri River for $12,500. Number 10 on the list sold for $9,000. These are some nice prices, but clearly Abe is not where the substantial rare and antiquarian material is changing hands.

We compared these results to our own list of the top 500 sales at auction last year (see: AE top 500 ). At the top of that list was a Shakespeare first folio at over $5.1 million. Number 500 went for over $60,000, almost two and one-half times Abe's number 1. We don't know what were the top sales by dealers outside of the internet, but 1814 first editions of the aforementioned Lewis and Clark are not that rare, now bringing in something in the area of $125,000 in very good condition. First London editions from 1814 (that's the true second edition) now go for perhaps a bit north of $30,000. Booksellers regularly sell many items on this level every year. Obviously, they are not concluding these sales on sites such as Abe.

Nevertheless, sales volume is enormous at Abe and other mass sites including Alibris, Amazon and Biblio. We are not sure how many volumes Abe sells, but from what we have read, believe it to be in the area of 20,000 per day. If so, book sales at all substantial auctions combined are maybe 2% or 3% of what they are on Abe alone. Obviously sales of lower and medium priced books have migrated to the ‘net at an enormous rate over the past few years. However, at the high end, the most collectible of rare and antiquarian books, sales are still being made in the traditional way. It would appear that those who sell primarily to the wealthiest collectors and institutions have been the least affected by the changes brought on by the internet.

Abe's top 10 overall bestsellers are clearly books for reading, not collecting. Number 1 is no surprise, The Da Vinci Code. After Thomas Friedman's The World is Flat, come three pop culture classics, The Seven Habits of Highly Effective People, The Purpose-Driven Life, and still hanging around, Tuesday's with Morrie. Six of the top 10 were first published in the 21st century, with the oldest being Truman Capote's 1965 classic, In Cold Blood.