Closing The Chapter: One Last Sentence For Smiley's Story 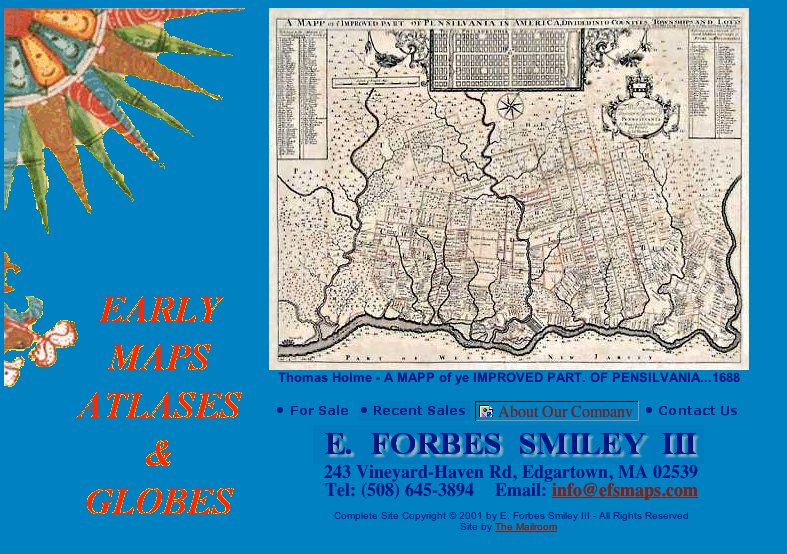 Former website of E. Forbes Smiley, now taken down from the internet.

The case of map thief E. Forbes Smiley came to a close October 13, 2006, when he was sentenced to five years in prison at the Connecticut Superior Court in New Haven. In this case, the bark was probably worse than the bite. Smiley had been sentenced to 3 1/2 years in prison at federal court a few weeks earlier, so you might assume the longer state sentence would be bad news for Mr. Smiley. Most likely it is not. The sentences will be served concurrently, that is, at the same time. While the longer state sentence would seem to imply that, even served concurrently, the total time would be longer, even that is unlikely. According to news reports, Smiley's attorney indicated that with good behavior, he would probably only serve about three years in prison, the same as anticipated with the federal sentence. As a white-collar criminal, who has acted properly remorseful in court, one would expect good behavior from Smiley.

At the state sentencing, as he had done at the earlier federal one, Smiley apologized for his behavior and acknowledged the harm he had done. Also similar to the earlier sentencing, some institutions addressed the court to explain why the crime was so serious that it called for stiffer punishment. Ultimately, with parole available sooner on state charges, the state was not in a position to add to the effective length of Smiley's time, despite the nominally longer sentence. Once federal prosecutors decided he was fully cooperative, the imposition of what some feel is a light sentence was sealed.

Nevertheless, some remain suspicious of his cooperation, some maps he may have "visited" at libraries still being unaccounted for. However, this issue slices both ways, and may explain federal prosecutors' belief that Smiley has cooperated fully. In the memorandum provided by Smiley's attorneys prior to sentencing, they state that even when contacted by federal prosecutors, the institutions were unaware they were missing half of the maps Smiley admitted to stealing. In other words, rather than attempting to hide some thefts once he began cooperating, Smiley helped return many maps the institutions never would have realized had been taken. Implications that Smiley took more than he admitted to may be explained by atrocious record-keeping, rather than incomplete cooperation. Besides, his attorneys stated, Smiley had no reason to hide further thefts, especially since any dishonesty found in his dealings with prosecutors would have overturned his lenient plea bargain.

Another point made by those seeking stiffer punishment was not only were millions of dollars worth of maps stolen, but the process by which he sliced them from books brought irreparable damage to rare and important historical artifacts. Smiley's attorneys may have struck a raw nerve by responding that the disbinding of atlases and books with maps in them, even the permanent separation of those maps from the books, is an all too common practice by reputable sellers and institutions. Of course, they, unlike Smiley, have a legal right to do so, but this point does tend to put a damper on the level of outrage over the destructiveness of this particular crime. Anyway, whatever you may think, it is moot now, as the sentences have been handed down.