Huge Auction Stills The Voice Of Once Largest Radio Church 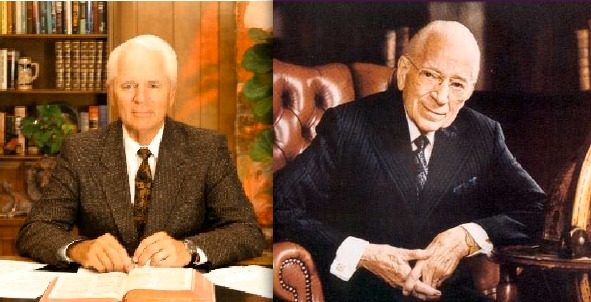 
Herbert W's eviction of his son could be looked on as a murder-suicide. While Herbert W. managed along until his death in 1986 at the age of ninety-three, he had no real successor. With Garner Ted gone, the bland heirs to the Worldwide Church of God could not hold the faithful nor generate the tithes. Almost all of the property is now gone, with another chunk set to depart in this auction. The church which once commanded the Sunday night airwaves is but a shell of itself, an obscure, forgotten remnant of another era. The official Worldwide Church of God is essentially mainstream today anyway, having rejected most of Herbert's teachings. Those who still follow him broke off into a host of new even smaller splinter groups. Herbert W's hope for a legacy died when he kicked his son out the door.

Garner Ted fared even more poorly. Without the powerful church behind him, he was forced to start over with a new ministry of his own. He still had his voice, just as Jim Bakker and Jimmy Swaggart had theirs, but the smell of scandal prevented his ever rising to the pinnacle again. To top that off, Garner Ted would later be thrown out of his own church for the same cause, too much interest in women to whom he was not married. He would have to start yet another new church, smaller still. He continued to lead this church in Tyler, Texas, ironically just a stone's throw from Big Sandy and Ambassador College, until his death in 2003 at the age of just 73. His obituary was barely a footnote, even in the Texas papers, so far had he fallen. However, his last ministry is still carried on by a son, an even smaller remnant than the tiny remains of his father's once great church.

The first two Friday and Saturday auction sessions took place in September, but the great majority of the sales are still to come. The sessions will be held Friday evenings and Saturday afternoons. National Book Auctions reports that the Ambassador College Library used Library of Congress classifications, and they will move through the library by categorization over the coming weeks. They state that there are a large number of "antique books including many landmark texts of significant value." Books will be sold in box lots, small groups, and individually. They have been posting the lots offered on their website, including thorough descriptions and photographs of the books. Someone has gone to a lot of effort to make such detailed information available on such a large collection.

Big Sandy is located in East Texas, near Tyler, roughly 100 miles from Dallas. It is oppressively hot in the summer, but fall is a fantastic time to visit the area. If you are interested in books, history, auctions, or travel, you have an excuse to go. However, if you can't make it, NBA has also provided for offsite bidding. The website address is nationalbookauctions.com, telephone number 607-269-0101. The online catalogue of listings can be found at http://nationalbookauctions.com/alertauctions.htm.