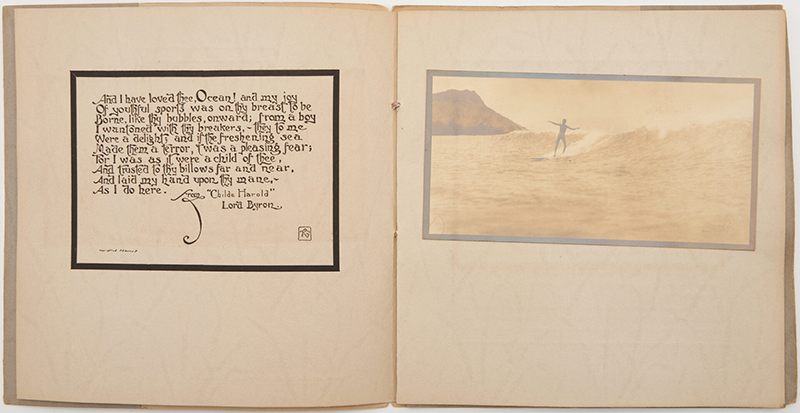 KNOXVILLE, Tenn.—The first known book to focus solely on surfing, made by hand with original silver gelatin prints from long lost negatives, leads a stellar lineup of rare books, documents and maps at Case Auctions’ Jan. 28-29 auction in Knoxville, Tennessee. The sale also includes an early copy of the Declaration of Independence, an important Revolutionary War era map of the Carolinas, a Civil Rights photographic archive, and a signed first edition of McCarthy’s Suttree.

Surf Riders of Hawaii is one of two exceptionally scarce soft cover books on Hawaii, self-published between about 1910-1915 by early photographer and historian A.R. Gurrey, Jr. (1874-1928). It contains 8 mounted gelatin-silver photographs of Waikiki surfers, including Olympic medalist Duke Kahanamoku (1890-1968), who is said to have popularized the sport of surfing, and the book itself has been credited with inspiring the genre of surf photography. There are fewer than a dozen known copies of Surf Riders, in two “versions,” Taupe and Gray, based on the color of the stab-sewn decorative cover stock paper wrappers.  The book being offered at Case has gray covers, and descended in the family of Maui entrepreneur Henry Perrine Baldwin. A handful of other copies of Surf Riders have been auctioned in the last decade between $28,000 and $34,000. This particular copy has never before been offered at auction and is conservatively estimated at $16,000-18,000. (All items in the auction have opening bids of half the low estimate with no further reserve).

The second A.R. Gurrey book is Idyls of Hawaii, a similarly constructed book with 11 mounted gelatin-silver photographs of Hawaiian landscapes, combined with English text poems. This is believed to be the first time that that any copy of IDYLS OF HAWAII has ever been offered at auction, and the estimate is $4,000-5,000. The original negatives for the photographs in both of Gurrey's books were likely destroyed in a flood or fire, both of which struck his home in the 1920s.

This auction also features a rare copy of Declaration of Independence, produced in 1818 by Benjamin Owen Tyler, estimated at $6,000-6,400. It is considered the first copy of the Declaration ever printed for commercial purposes. Collectors of early American ephemera may also be interested to see an important, first state map by Henry Mouzon of North and South Carolina “with Indian Frontiers”. Published in 1775 just weeks after the battles of Lexington and Concord, the map prized for its geographical and topographical accuracy at the time and was utilized by British, French, and American war commanders including George Washington. It is estimated at $5,000-6,000.

The auction also showcases several documents from the collection of noted Nashville historian and author Stanley Horn, which are being liquidated by his family 42 years after his death. They include letters written and signed by President Andrew Jackson, General Robert E. Lee, Jefferson Davis, James K. Polk, and General Stonewall Jackson, along with invitations to a ball celebrating the visit of the Marquis de Lafayette to Nashville in 1825, and to Jackson’s 1829 Inaugural celebration in Nashville (cancelled when his wife Rachel died suddenly)

An exceptionally rare collection of 375 different minstrel songs or penny ballads, bound as a single volume, can be found in the auction as well. Individual sheets of this style’s important contribution to American musical history are becoming increasingly scarce and costly; this volume offers the unusual opportunity to collect a large number of these slip ballads at one time.

Another notable lot is an archive of Civil Rights era photographs taken by photographer Harold Lowe. The archive contains more than 70 black and white photographic prints plus contact sheets of more than 3,000 raw images portraying lunch counter sit-ins, rallies, and other protests in Nashville in the early 1960s. Martin Luther King, John Lewis and other leaders of the Civil Rights movement are included in some of the images.

The auction also features a strong selection of antiquarian and modern books, including an author signed 1965 Limited First Edition of Truman Capote’s “In Cold Blood”; 3 William Faulkner 1sts, including “Go Down Moses” and “Requiem for a Nun”; 3 1st Edition Mark Twain books, including a “Prince and the Pauper” 1st Printing; an 1852 printing of “Uncle Tom’s Cabin” and various historical books on Hawaii, Native American and Western interest, and others.

Not to be missed are this auction’s Cormac McCarthy books, including standouts such as a Signed 1st Edition 1st Printing of “Suttree”; an incredibly well-kept, Very Fine 1st/1st of “Blood Meridian”; a signed slipcased advance of “All the Pretty Horses”, and 1st Edition / 1st Printings of “All the Pretty Horses”, “The Crossing”, “Cities of the Plain”, “No Country for Old Men”, and “The Road”.

The complete catalog for the auction, with full descriptions, price estimates, and photographs for items, in the order in which they will be sold, can be viewed online at www.caseauctions.com .  Case’s gallery is located at 4310 Papermill Drive in Knoxville. The live auction begins Saturday, Jan. 28 at 9 am and Sunday, Jan. 29 at 1 pm. Live, onsite bidding is welcomed; online, absentee and phone bids will also be accepted. Persons wishing to preview the auction may do so in limited numbers by making prior reservations on the company’s website through Friday, Jan. 27. For more information, or to consign objects for a future auction, call the gallery in Knoxville at (865) 558-3033 or the company’s Nashville office at (615) 812-6096 or email bid@caseauctions.com.