Lurking Deep Under the Print of an Ancient Manuscript Lies an Even Older, Missing Astronomical Masterpiece 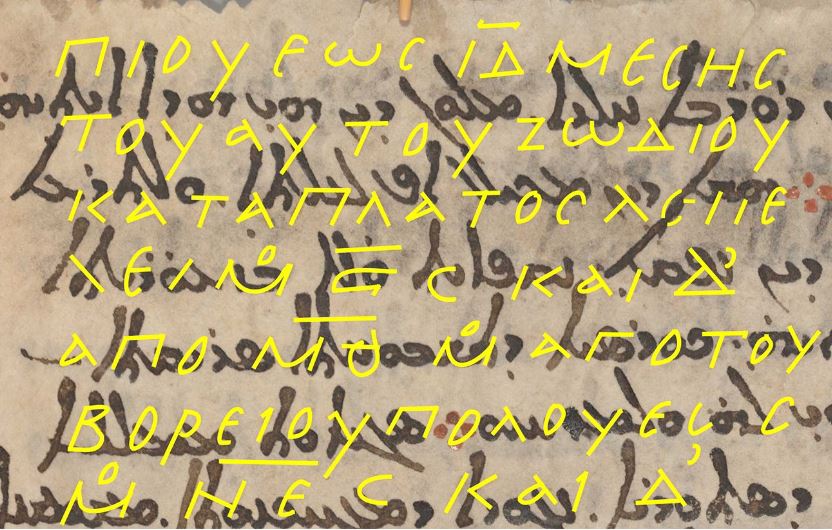 Picture shows how erased older writing (yellow) is brought out by multispectral imaging (photo credit: Museum of the Bible).

You never know what you may find if you examine an old book very closely...v e r y closely. An amazing discovery of ancient Greek astronomical readings, a star chart, has been found beneath the writing of a more recent work, a mere one millennium old. What is remarkable is this contains part of the star chart created by Hipparchus, a Greek astronomer and mathematician who lived from roughly 190-120 BC. Hipparchus was known to have created the first comprehensive chart of the stars but no one outside of antiquity had ever seen it. It was known only from later writings referencing it.

The manuscript in question is Codex Climaci Rescriptus, an important Christian document. It is a palimpsest. For those unfamiliar with the term, that is when an old vellum or parchment manuscript has its writing scraped off so new text can be entered. It was a common practice before the use of paper as vellum pages were expensive to make. It was cheaper to simply remove old, no longer needed text and reuse the vellum page for something new. The Codex was underneath the more recent writing and under some of it the star chart.

It has been known that this was a palimpsest for many years, but more recently, multispectral imaging has been developed that can “see” through the surface text to the washed text below. It is never completely removed. Light at various wavelengths is shined on the document and with the aid of a computer program it is able to reveal the underlying text.

On the surface there were Syriac texts from the 10th or 11th century. Under it, was the Codex Climaci Rescriptus, a perhaps 6th century work in Palestinian Aramaic. It is considered extremely important as it contains some of the Gospels in the language closest to that Jesus spoke. It was believed to have been created in Judea, a mountainous region in what is now southern Israel.

The original manuscript made its way to St. Catherine's Monastery in Egyptian Sinai. That was perhaps in the 8th or 9th century, and that is where the original text was scraped and washed and the newer text inserted. It was there for many centuries until its pages, in separate groups, appeared for sale in Cairo. At that time, British twin sisters and biblical scholars Agnes Smith Lewis and Margaret Dunlop Gibson were looking for ancient biblical texts to purchase. In three stages between 1895-1906, they purchased most of the manuscript.

When the sisters died, they left the manuscript to Westminster College. They had earlier given the college a tract of land in Cambridge for a new campus. In 2009, Westminster decided to sell the Codex Climaci Rescriptus, and delivered it to Sotheby's, which put an estimate of £400,000-600,000 on it. It did not sell. However, in 2010 it was sold to the Green family, owners of Hobby Lobby, for placement in their planned Museum of the Bible. That is where it resides today.

While the Green family's interest was biblical, later multispectral imaging found something different on some of the pages. It is scientific rather than theological material. Imaging has revealed a portion of Hipparchus' star chart, in particular, the part around the constellations Corona Borealis, Draco, Ursa Minor and Ursa Major.

Not a lot is known about Hipparchus other than he is said to have been born in Nicaea, now located in Turkey, and that he died on the island of Rhodes. That leaves a lot of time, roughly 70 years, in between. Only one of his works is known to still exist and his star chart wasn't it. However, he was cited in various later texts which is why we know of his extensive work. This star chart is not his original work but was likely copied six centuries after he lived. Among those who used his work was Ptolemy, the best known astronomer from antiquity.

A report was recently published in the Journal for the History of Astronomy by Victor Gysembergh, Peter J. Williams, and others entitled New evidence for Hipparchus’ Star Catalogue revealed by multispectral imaging. This is a fairly technical article, not easy for non-astronomers to fully understand. Most notable among their findings was that Hipparchus' celestial map was amazingly accurate, within 1° of the actual stellar coordinates. There had been speculation that Ptolemy simply copied Hipparchus' catalogue. This has been shown not to be true, because while Ptolemy referenced Hiapparchus, his star catalogue is not the same. Despite his coming along centuries later, Ptolemy's was not quite as accurate.

Hipparchus' star catalogue listed 850 stars. Computerized ones today now list over one billion stars. That in no way diminishes Hipparchus' accomplishment as his chart was created long before telescopes, let alone computers, were invented. It was the most accurate one for a good 1,500 years.