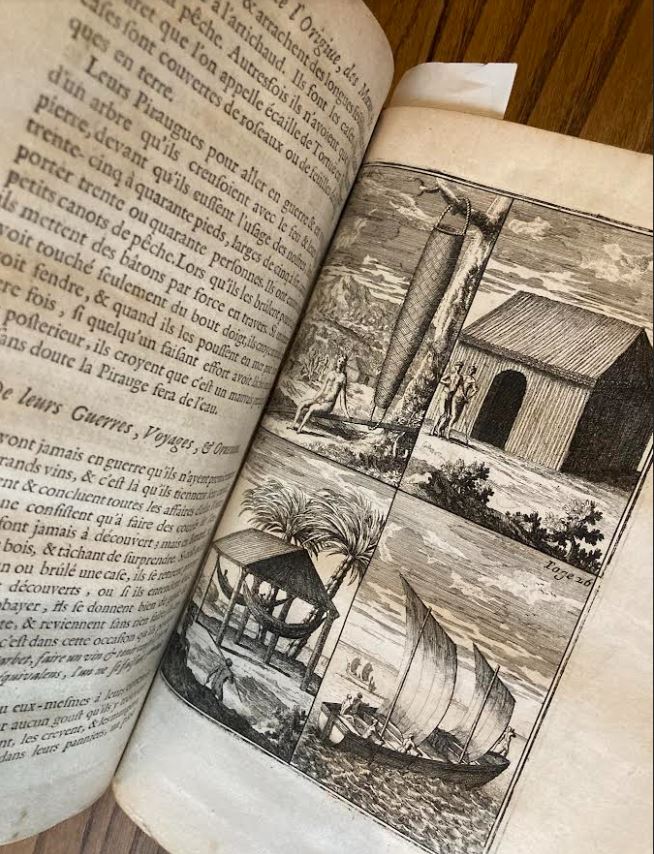 In 1674, the French Protestant printer Justel published a crucial book about the West-Indies that compiled several relations yet to be published or translated into French. La Borde’s description of the Caribbean Indians is one of them, and it’s a fine example of what we might call... well, contemptuous ethnology?

The price or value of a book depends on its rarity and its contents. Recueil de Divers Voyages Faits en Afrique et en l’Amérique... (Paris, 1674) is thus rightly sought-after by all travel books lovers. Not only does it contain gorgeous folding maps (hence its price) and engravings but it also features the crucial descriptions of Jamaica (Blome), Barbados (Ligon), the English settlements in America (Blome) as well as La Borde’s Relation de l’Origine, mœurs, coutumes, religion, guerres et voyages des Caraïbes sauvages des Îles Antilles. La Borde was fascinated enough by the Caribbean Indians to enquire about their beliefs, their customs and their way of life but at the same time, his contempt for them is palpable in every page. Of course, we must be careful when reading those books—they were written 350 years ago when no one questioned the so-called inferiority of those “savages”. Nevertheless, in the wakes of Father Bouton (1640), Du Tertre or Rochefort, La Borde is one of few who gave an early testimony of this ethnic group.

La Borde was a Jesuit missionary but his relation resembles no other. He writes about the Caribbean Indians: “They shamelessly burp, fart and piss while eating. They squat like women to piss, and cover their faeces like cats, with their feet.” They were, he says, very superstitious, and “when they push their canoe toward the sea, should one of them incidentally fart, they see it as a bad omen.” La Borde also gives details about their sexual life. “They chose their wives without caring about family links, as they mingle indifferently, like beasts. I’ve known some of them who’d married their own daughter; they will leave or kill their wife whenever they like, as well as their father.” La Borde is adamant that they were quite lecherous, “including the children”. He adds that when drunk, they did “as the satyrs do.” We can imagine how an educated Jesuit could feel among them. “The men are so idiot and ridiculous that they’d never do a woman’s work (...). When their women fetch some wood to cook, they go along with them just to make sure they won’t cheat on them. A pregnant woman will sweat all she can while cutting the wood, and her man will sit on his ass nearby, watching her, and he will never give her a hand to lift the heavy burden.” The women, though, were as nasty as their husbands according to La Borde. We can feel his disgust when he relates the way they prepared the Ouicou (traditional wine): “They crush some roots in a mortar, then chew them, and then boil them (...). Sometimes, the old “roupieuses” (this old French word was used to describe people with runny noses) chew some as well, and vomit it back into the mortar (...). Should they catch a louse or a flea, they put it into their mouths and chew it altogether.”

La Borde’s relation is far richer than those picturesque passages of course. He writes a lot about their ceremonies, beliefs and customs. He made some drawings too. As a matter of fact, the engraving of a “taboui”, or small traditional hut featured in Justel’s edition is very valuable. In an academic article entitled Reconstruire le taboui...*, we can read: “The only known representations of a taboui are to be found in La Borde and Pierre Barrère’s relations—the latter being about Guyana.” This shines another light on La Borde’s work. It’s more complex than it might first appear. And no matter what we think about it today, it’s extremely valuable—even more so if it’s a 1674 first edition.

Find more about the value of Justel’s in our database (logged-in subscribers): https://www.rarebookhub.com/search?utf8=%E2%9C%93&search_type=ae&q=justel+recueil&per_page=