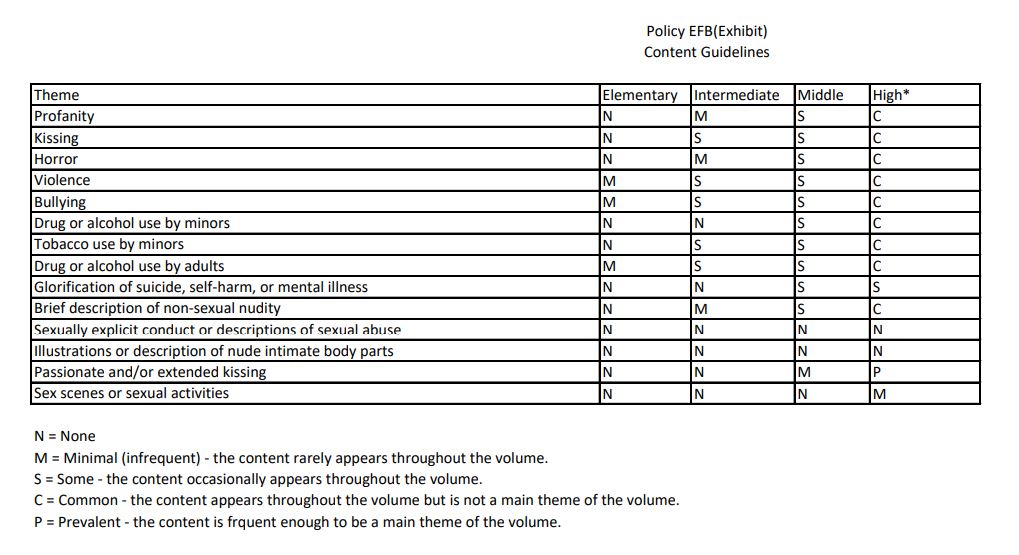 If there were hopes that the conclusion of the recent election cycle would bring an end to the recent rash of book banning and censorship attempts at libraries, it turns out not to be so easy. The anger, intolerance, even hate some feel has not subsided, and unfortunately, libraries are on the front line. Once places of peace and thoughtful learning, libraries have become places where unhappy people spew out their anger with their own sad lives. Who better to take it out on than the LBGTQ community, people who are different? Contented people don't act this way.

At this point, it's impossible to keep up with all the censorship stories at libraries in the news today. We would have no time left to read or write about anything else. So we will mention only two cases this month. One is of a disappointing setback for a library that overcame the defund-the-library movement with a surprisingly successful Go Fund Me campaign. The second involves a school district's set of guidelines designed to prevent libraries from helping kids learn from responsible sources what they end up learning from irresponsible sources on the street.

The sad story pertains to the Jamestown Township library in Michigan. The Patmos Library used to receive almost 85% of its funding the same way police, the fire department, road department, and many other public services receive theirs – an assessment on the property tax. As in so many communities, the anti-LGBTQ came out, and their response was to defund the library, close it down. No library at all is better than one that has a handful of books sympathetic to tolerance. And so, they put defunding the library on the ballot last summer.

The library trustees did not give in. They refused to be intimidated. They refused to back down. The books stayed, the community voted, and over 60% of the voters chose to defund the library and shut it down rather than show any sympathy to their despised minority. But then, a miracle happened. A library supporter initiated a Go Fund Me campaign that raised an incredible $250,000. Author Nora Roberts contributed $50,000. The library was saved, for now, but the library trustees understood this was not a long-term solution. Without public funding, the library could not survive indefinitely. So, they put the issue back on the ballot for November's election day.

And now for the sad news. Voters once again turned the tax down. The vote was a little closer but almost 56% of the voters again rejected funding the library. It appears that the library will reduce its hours and cut staff to keep it going as long as possible, but that is only a temporary solution. One of the library's opponents was quoted in the press last summer as saying, “They are trying to groom our children to believe that it’s OK to have these sinful desires. It’s not a political issue, it’s a Biblical issue.” “Grooming.” It's a smear and a lie used to attack LGBTQ people these days. I guess the claim is that no straight men or women abuse or molest children of the opposite sex, that no teachers ever get involved in illicit relationships with students of the opposite sex. It's only the LGBTQ community. In the age of the Big Lie, there are none bigger than this one.

Now for the second case – The Keller, Texas, school district recently had a well-attended school board meeting where some decisions were made. Keller is not some distant rural place but a suburb of the Dallas-Fort Worth area. Their school board is controlled by very conservative “Christians.” Naturally, the most important item on their agenda, the one that brought out a lot of parents who generally don't care what is going on in their schools, was LGBTQ related books. According to local news outlet WFAA, school board member Joni Shaw Smith said, “I do trust librarians. I trust our teachers and I wanted to know that I don’t have to look at this list but here I am finding multiple books that unfortunately are part of the LGBTQ community.” Board Vice-President Sandi Walker commented “Discussions regarding gender fluidity and other ideologies do not belong in schools.” Being trans is an ideology? Is race or physical handicaps an “ideology” too?

So, the Keller schools have a policy, which you can see by clicking the thumbnail image with this article to enlarge. It lists various sorts of topics along with what grade levels it is acceptable to have mentioned in library books and for which grade levels it is not. There are four levels for students, from elementary up to high. Two topics that can be mentioned at every level are bullying and violence. Drug and alcohol use come in along the way. Even “Glorification of suicide, self-harm, or mental illness” becomes acceptable at the middle level. What is never acceptable to be mentioned in library books are “illustrations of nude intimate body parts” (good luck teaching human biology with that), descriptions of explicit sexual conduct (though sex scenes are allowed at the high level), and the most horrible thing of all - “discussion or depiction of gender fluidity.” This is not acceptable even in high school.

What is gender fluidity? Here is how the Keller school district describes it: “any theory or ideology that: (1) espouses the view that gender is merely a social construct; (2) espouses the view that it is possible for a person to be any gender or none based solely on that person’s feelings or preferences; or (3) supports hormone therapy or other medical treatments or procedures to temporarily or permanently alter a person’s body or genetic make-up so that it ‘matches’ a self-believed gender that is different from the person’s biological sex.” This can never be mentioned.

Now let's look at what is acceptable at certain levels. Violence: “Behavior involving physical force intended to hurt, abuse, damage, or kill someone or something to include glorification of use of weapons.” Bullying: “descriptions of behavior that seeks to harm, intimidate, or coerce another, especially someone perceived as vulnerable.” Harm, abuse, intimidation, even killing of students are acceptable topics but anything involving trans people who seek to harm no one are too awful to contemplate. According to The Texan, some parents raised the concern that such attacks on LGBT students could lead to suicidal tendencies, but that had no impact on their policy decisions. I guess that makes sense since “glorification of suicide” is an acceptable topic at middle and high levels. Perhaps they feel this is a better answer than trying to help these kids live with who they are.

Twenty-one people, including 19 children, were slaughtered in their school room in Uvalde, Texas, on May 24. This seems to have had little impact on these enraged parents. They have done nothing meaningful to stop it. The only response from Texas' government was to make DNA kits available to parents, so if their schoolchild's body is so blown away by powerful weapons in their schools that they are unrecognizable to parents, there will be a way to identify their bodies. I am not making this up. It is actually true. Exposure to trans kids apparently is worse than death in their eyes.

What is it that can lead parents to be so cruel to harmless children? Do they not understand or do they not care? What if their own child comes out as LGBTQ? Will they hate them too? I am sure these parents believe they sincerely love and wish to protect their children. What I don't understand is what they mean by this.