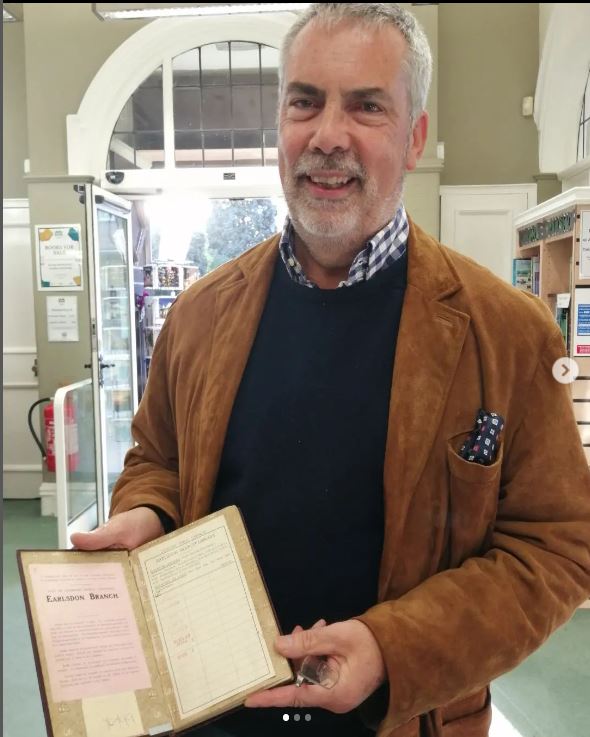 There have been several stories of books that have disappeared from a collection finally making their way home recently. Those are happy ending stories, and these days, we all need some cheer. So here we go, and welcome back.

First up is a story of an overdue library book being returned. We hear about these cases occasionally but this one was seriously overdue, very, extremely, extraordinarily overdue. The book was Red Deer by Richard Jefferies. You may not know Jefferies but he was a popular 19th century writer of rural, animal, and nature tales. Red Deer was first published in 1884 and that edition is worth around $350 today, but it's unlikely the Earlsdon Carnegie Community Library of Coventry, U.K., had a first edition in 1938. That's when Captain William Humphries borrowed their copy of Red Deer. He borrowed the book for his daughter, Anne. The book was due on October 11, 1938, but neither the Captain nor his daughter returned it. It remained in her possession and the responsibility to return the book finally fell to the Captain's grandson and Anne's son, Paddy Riordan. He did what his ancestors failed to do and returned the book. As he explained to the BBC, “I feel I have expunged my grandfather's crime.” He said that jokingly, of course.

Mr. Riordan went a step further. He paid the fine. Not all of it, naturally. That would have amounted to something like $9,000. Fines build up over 84 years. Rather, he paid the library approximately $20, which would have covered the fines through the 1930s. Apparently all was forgiven and the library is not holding out for the remaining $8,980.

A 400-year-old book has made its way back to the museum that once owned it, but it wasn't overdue or stolen. It had simply been sold years ago as not relevant to the institution's collection. The book is L’Histoire et Chronique de Provence, a history of Provence in France, written by César de Nostredame, son of the Nostradamus we all know. He could have foreseen this happening (it's probably written in his book somewhere if you know how to interpret it). The book was published in Lyon in 1614, the first edition.

You might think the owner was some library in France, but that's not even close. It's less than intuitive home is the Danville Museum of Fine Art and History. That is Danville, Virginia, U.S.A. What was it doing there? That is evidently what an earlier curator was thinking when they sold the book for $800. However, there is a story as to why it was there in the first place. The book was originally brought to Danville by two educators at Stratford College, Mabel Kennedy, college dean, and Ann Carrington Revell, the music teacher. They put together a major collection of antiquities from Europe which they gave to Stratford. They were assisted by Kennedy's brother, Hoffman (Henry) Kennedy, a New York and Paris antique dealer, in building their collection. Ms. Kennedy was dean from from 1930 until 1969, when she died, so the purchase was likely made during this time or a little before.

In 1974, enrollment declining, Stratford closed. At that time, some 1,000 items from Stratford's arts collection were given to the Danville Museum. Sometime after that, a decision was made to sell the book. Recently, Tina Cornely, the museum's Director, noticed a copy of the book was being offered by a bookseller in New York. She recognized it as being the Danville copy by a stain on the title page. The decision was made to buy it back, the price now being $1,900. The dealer had purchased it at a Connecticut estate auction but no more is known about where it was in the years after it left Danville. But, now it's back home and on display at the Danville museum.

Here is another return of a book, but this time it is one that was stolen. A “tiny but valuable antiquarian book” that once belonged to Sir Walter Scott has been returned to the Abbotsford Library. Abbottsford was the home of Scott and is now a historic site open to the public. The book is Herman und Dorothea von Goethe by Benjamin Fischer, published in 1822. It was a gift to Sir Walter.

It went missing from the Abbotsford Library in 1997 or earlier. Its whereabouts was unknown until appearing in a used book store where it was sold for a fraction of its value. It was then taken to an auction house as part of an estate sale where its listing was noticed by The Rt. Hon. James Wolffe, former Lord Advocate and Dean of the Faculty of Advocates and Chairman of the Abbotsford Trust. The Advocates is a group of distinguished lawyers in Scotland.

Neil Mackenzie, Keeper of the Advocates Library, wrote to the auction house requesting the book be returned. According to the Advocates website, he explained, “At the beginning of this month the eagle-eyed James Wolffe KC spotted the title in a Lyon & Turnbull auction catalogue. The 200-year-old book has a handwritten addition on the flyleaf indicating that the book belonged to the Abbotsford Library, which is owned and operated by the Faculty of Advocates Abbotsford Collection Trust. When it was pointed out to the auction house that the Trust remained the owner of the book, Lyon & Turnbull moved swiftly to withdraw it from the sale and returned it without quibble.

“The Trust is most grateful to Mr Wolffe, to Lyon & Turnbull, and to the executors. It is wonderful that a cultural treasure has been restored to its rightful home.”

Finally, we have a story that turned out to be a false alarm. Questions arose when French President Emmanuel Macron gifted Pope Francis a first French edition of Immanuel Kant's 1796 book, On Eternal Peace. What generated the concern was a library stamp on the title page. It bore the stamp of the Academic Reading Room in Lviv. Lviv is a city in Ukraine, but prior to the Second World War it was part of Poland.

The concern was that the book had been looted from the then Polish library. When the Nazis invaded Poland, they took all sorts of loot, including valuable books from Polish libraries. The Russians also took took books from Poland after they invaded. Was this one of them that therefore still belonged to Lviv or Poland? The Polish Foreign Affairs Ministry issued a statement saying, “the very fact of giving the Pope by the President of France a book with a seal indicating its origin from the collection of a pre-war Polish organisation should be preceded by detailed provenance research, excluding that the object may constitute a war loss.”

A detailed provenance search was made and it revealed that the book had been in France well before Germany invaded Poland. The book had been sold by Parisian bookseller Patrick Hatchuel for 2,500€. Hatchuel said it had a label from an earlier French bookseller, Lucien Bodin, who was in business in Paris roughly from 1880-1910. Hatchuel said he purchased it from the son of a collector who owned it for half a century. Libraries do at times deaccession books or will sell or trade duplicates with other libraries. That is a far less problematic explanation. Polish Culture Minister Piotr Glinski confirmed the legitimacy of the transaction, saying in a “tweet,” that the book “is not a Polish war loss. Contrary to some media claims ... Everything indicates the book was in France at the turn of the 19th and 20th centuries.”