Memoirs of Honoré Riouffe: Romantic Nightmare during the Révolution 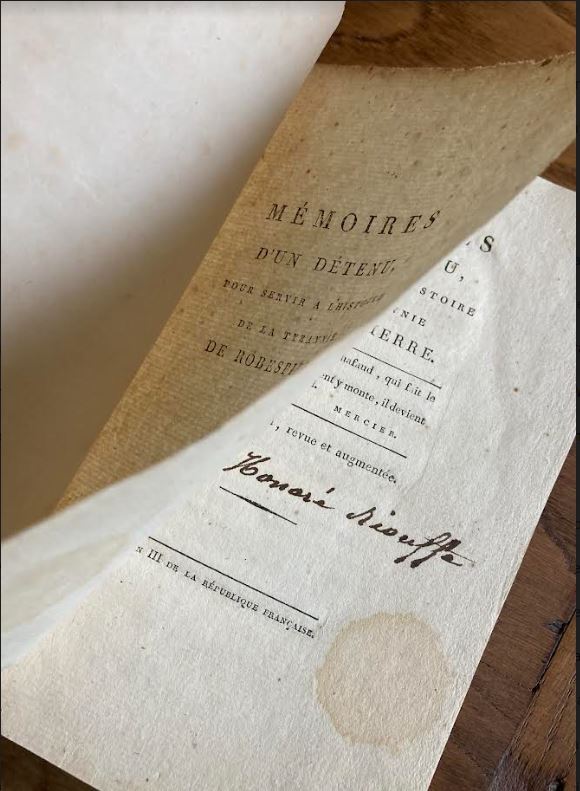 The French national narrative has it that the Révolution of 1789 is but a blessing. The people standing up against tyranny and triumphing against all odds—vive la France! But the enthusiasm of 1789 gave way to an unbelievable thirst for blood in 1793—that’s when the dark period known as The Terror started. Honoré Riouffe (1764-1813) was arrested and survived to testify in a book, Mémoires d’un détenu... (Paris, An II): the other (romantic) side of the Révolution.

When the Révolution broke out, Riouffe immediately joined in alongside the Girondins—a famous revolutionary faction. Expectations were great, but as Danton once said, “Revolutions will always put the most villains in charge.” It wasn’t long before the dream of a better society became a bloody nightmare. Republican factions became radical and instituted the regime of Terror in 1793. Yesterday a hero, today a traitor: Riouffe was arrested and thrown into La Conciergerie in Paris. “People will cry when hearing about the atrocities I have witnessed and suffered for 14 months,” he writes. Two hundred years later, his narrative is still shocking. Riouffe witnessed the Terror from the inside, as France was left in the hands of the ignorant and vile enforcers of dangerous fanatics such as Marat and Robespierre.

“From all over France, thousands of victims were sent to La Conciergerie,” Riouffe states. It was actually but a stop on their way to the guillotine. “They had built a huge aqueduct on Saint Antoine Square. Let’s say it, no matter how horrific: they carried human blood by buckets; during the executions, four men were used daily to carry them to this aqueduct.” In the farcical revolutionary courts, drunk and rude chaps from the rabble turned judges, and sent thousands of people to death. Almost none escaped their wrath. “During the last months, it was like hell—day and night the doors were permanently locked and unlocked. Sixty persons would arrive each evening and sent to the guillotine. The next day, a hundred new ones replaced them, who were executed the following day (...). I’ve seen trails of men sent to the slaughterhouse. They wouldn’t even sigh; they were silent. They seemed to be able of one thing only, dying.” Just like the rest of France, they were in a state of awe.

Riouffe miraculously survived and later led a successful political career. But while in La Conciergerie, he witnessed the last hours of some famous people, including Camille Desmoulins—described in our schoolbooks as hero of the Révolution. “He didn’t reach the heights of his writings on that occasion. He made it clear that day that you can be both a spicy writer and a pitiful man.”

Before he was beheaded too, Danton—Robespierre’s arch-nemesis—went through La Conciergerie. “He kept on talking (...) loud enough so we could overhear him. Robespierre had outwitted him, and he felt ashamed. He said many things, including some he probably didn’t mean—and his ejaculations were punctuated with curse words.” Riouffe remembered some of his statements: “I leave everything in a state of waste; there’s not one man of value at the government.” Or: “The fact that Robespierre was never as friendly with Camille Desmoulin as the day before he had him arrested is the proof that he’s just another Nero.” Riouffe also saw “citizen Roland”—Manon Roland, one of the Girondins’ leaders. “She the soul of a Republican in a gracious body kneaded by a certain elegancy of Court. We were all around her, in awe with her. (...) The day she was executed, she had dressed in white; her dark hair was falling on her shoulders. (...) On the square where the guillotine stood, she bowed in front of the statue of the liberty and uttered those memorable words: “Oh liberty, so many crimes are committed in your name!”

With the German occupation of WWII, the Révolution is arguably the most fascinating period of our history—I remember listening to my history teacher as a teenager, drinking his words like the aqueduct of St Antoine square drank the blood of my ancestors. This book printed at the time smells the sweat, the fear and the blood of those who went through this terrible period. Let’s not be naive, though—this is a political book, as shown by the surprising text printed on the last page: The Directoire of the city of Toulouse has received the letter from the Executive Commission of Public Instruction on Floréal (April) 1st, along with a book entitled Mémoires d’un Détenu... that we are invited to promote and to distribute. (...) As it perspires nothing but a love for freedom and a hatred for tyranny (...) it shall be printed 1,000 copies of it and distributed all over our district. Traitor yesterday, hero of the Republic today!

As far as the former “privilège du Roi” was concerned, it was officially abolished of course—only to be replaced by a Republican privilege: Read and approved by us, representatives of the people, for the reason that the painting of the tyranny imposed on the French people is the only way to prevent new attempts against its sovereignty. You could now offend the king, but not the Republic. It will come as no surprise then, that the passage about Camille Desmoulin was censored (or simply removed?) in at least one edition—the one at Paris, 1795. Anne de Mathan writes about the memoirs written by the disgraced Girondins in an article entitled Des Pierres pour Saturne... (openedition.org). She states: “They are combat texts that stigmatize their opponents and pretend to reveal their guilty projects.” She also explains why their reading is so intense: “Written by people facing death, they add a romantic dimension to the Girondins’ fate.” This is it—the romantic face of the Révolution. As if you were there—the power of old books.