“My God what have we done.” The Log Book Account of the Atomic Bombing of Hiroshima on Sale at Heritage Auctions 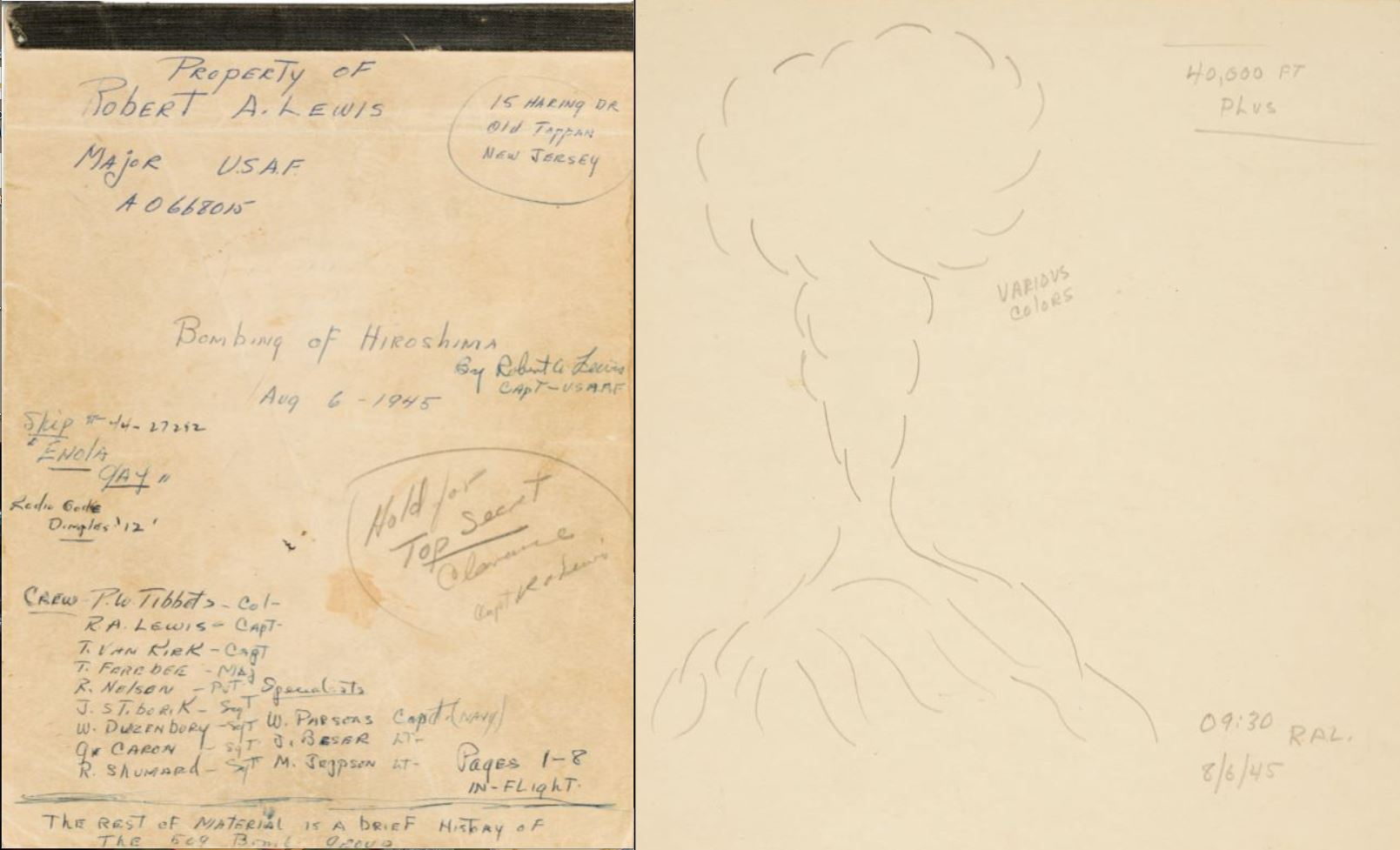 The world changed on August 6, 1945. History can be divided into two eras, the one before August 6, and the one after. In the one after, we have all lived under the fear of instant annihilation unknown before.

That was the day the atomic bomb was dropped on Hiroshima. There had never been anything so awesome, or terrifying before. Over 100,000 humans are estimated to have died, most incinerated instantly, quite literally in a flash. President Harry Truman made the call, and it has been controversial ever since. Truman wanted to end the war and save American lives. Though their defeat was obvious, Japan refused to surrender. Conventional warfare would have led to many more American deaths. Over 100,000 Americans had died fighting Japan in a war Japan started, beginning with the bombing of Pearl Harbor. The Japanese people did not elicit much sympathy from Americans in 1945. Even after the bombing of Hiroshima, Japan resisted surrender. America responded by bombing Nagasaki and with that Japan agreed to surrender. That was the last time an atomic bomb was dropped on a human target.

Since 1947, there has been something known as the “Doomsday Clock.” It is a number meant to estimate how far we are from being thrust into a nuclear war. It started that day set at 7 minutes before midnight. It dropped to two minutes in 1953 at the height of the Cold War. It proceeded to rise as high as 17 minutes in 1991 after the fall of the Soviet Union. Since then it has been falling, to 2 minutes in 2019, and 100 seconds in 2020 and 2021, the shortest time ever. This preceded the threats of nuclear war from Russian leader Vladimir Putin in response to the West's defense of Ukraine after his invasion. We can only wonder now what the next reading will be.

On July 16, Heritage Auctions will close the bidding on one of the most significant artifacts from that terrible day of August 6, 1945, which set these wheels in motion. It is the log book kept by Co-Pilot Capt. Robert A. Lewis on that fateful day. Lewis was on the Enola Gay, the plane that dropped the bomb on Hiroshima. The only other log kept on the plane that day simply recorded course, speed and coordinates. Lewis was keeping an account at the request of New York Times reporter William Laurence. Laurence was supposed to accompany the flight himself but arrived late, so he requested Lewis write down his experiences during the flight.

Lewis provides a running commentary of the flight from take-off to return. As the mission began, “We started engines at 0227 and taxied out to take off at 0235. Then we got off the ground at exactly 0245.” He continues, “By 0552 it is real light outside.” They settle in at 9,000 feet cruising altitude. “We'll stay here until we are about 1 hr. away from the Empire.” They later climb to 30,000 feet and Lewis writes, “Everyone will be relieved when we have left our bomb and get half way home, or better still all the way home...”

Then, “At 0730 we are loaded, the bomb is now alive and it's a funny feeling knowing its right in back of you..” Later, “Right now we are 25 miles from the Empire...,” followed by “There'll be a short intermission while we bomb our target.” Then comes the moment at 8:16:02. “For the next minute no one knew what to expect, the bombardier and the right seat jockey or Pilot [Col. Paul Tibbetts] both forgot to put on their dark glasses and therefore witnessed the flash which was terrific... 15 seconds after the flash there were two very distinct slaps on the ship. Then that was all the physical effects we felt. We then turned the ship so we could observe results, and there in front of our eyes was without a doubt !!! the greatest explosion man has ever witnessed. The city was 9/10 covered with smoke ...and a column of white cloud, which in less than 3 mins. reached 30,000 feet and then went up to 50,000...” Even 400 miles from the target, the cloud was still visible.

After some more thought about what he had seen, Lewis wrote, “I am certain the entire crew felt this experience was more than anyone human had ever thought possible. It just seems impossible to comprehend. Just how many did we kill? I honestly have the feeling of groping for words to explain this or I might say My God what have we done. If I live a hundred years I'll never quite get those few minutes out of my mind...”

The log book also contains some notes Lewis made after the return as well as some by Laurence. Oddly, it begins “Dear Mom & Dad,” and concludes “Love to all Bud.” Lewis was afraid authorities would seize the book so he tried to make it sound like a long letter home. On the back cover, Lewis added a sketch of the explosion and mushroom cloud.