Ephraim George Squier’s 1876 Priced Auction: Not all auctions are equal 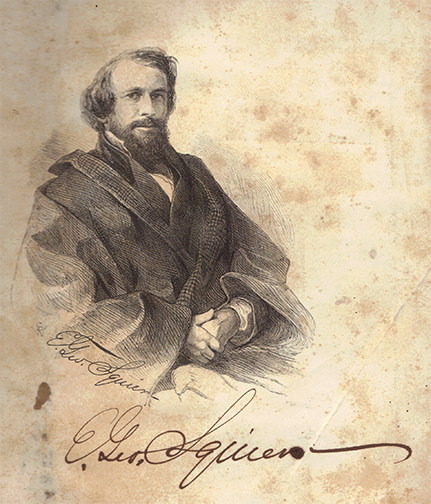 When we work with older auctions at Rare Book Hub we try to understand them.  Old auctions, in any event, are useful to provide incremental data whether the sale is significant or not, but sometimes auctions gain importance over time because their subjects loom larger.  A sale we have been working on, the Catalogue of the Books, Manuscripts, Maps, Drawings and Engravings Principally relating to Central America, and Peru, American Antiquities, etc.” is one of them.  The collector, E. G. Squier, lived in the 19th century and influenced the development of American archaeology and anthropology.

He grew up in Bethlehem, 8 miles south of Albany, New York and in his teens and came under the thrall of Joel Munsell, the peripatetic Albany printer who saw his talents useful. There he became a poet at 19 and soon after contributing editor of the Literary Pearl: And Weekly Village Messenger, after which editor for 4 other short lived literary explorations.

In 1845, at 24 he moved to Chillicothe, Ohio to become editor of the Scioto Gazette, where in his spare time he would find his life’s work; to understand human development, by studying and writing about the mounds of Ohio, erected by ancient peoples.  It would lead to his first book, co-authored with Edwin H. Davis in 1848, Ancient Monuments of the Mississippi Valley, providing early impetus for archaeology and ethnology as scientific disciplines.

The Smithsonian Institution made that book, in 1851, their first publication and first volume of their Contributions to Knowledge series.  Religion was not to be minimized while science was to be a or the way to understand the world.

Soon after, Mr. Squier was appointed chargé d’affaires for the United States to the Central America and subsequently negotiated an agreement, although never ratified, anticipating the building of a canal, eventually the Panama Canal, connecting the Atlantic and Pacific Oceans.

After which, returning to New York he became editor and chief of Frank Leslie’s Pictorial History of the American Civil War, in 1863 being appointed as U.S. Commissioner to Peru, using the opportunity to investigate Inca ruins, later giving lectures about them at the Lowell Institute during their 1866-67 season.

In 1868, he was appointed consul-general of Honduras and in 1871 elected first president of the short-lived Anthropological Institute of New York.  In between he conducted ethnological studies, particularly in Nicaragua, Honduras and Peru.  After which, he remained busy and turned his gathering accumulation of printed materials, more than a hundred of his own, into the fabulous library that Bangs, Merwin in New York sold on his behalf beginning on 24 April, 1876 continuing until the last of his 2,032 lots were hammered down.

A copy of that sale, fully priced, is one of the more than 40,000 auctions searchable in Transactions+ today.

And it turns out every sale and every book, manuscript, map and ephemera has a story.

Here is a link to that sale.  Please note you need to be logged into your paid services account to reach Transactions+.