Some Words of Advice on Collecting NFTs from Bill Gates 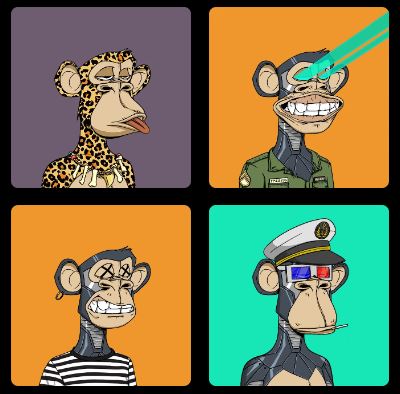 Some of the boring Bored Apes images, from the Bored Ape Yacht Club website.

Rare books and paper have long navigated the fine line between collectibles and investments. Usually, collectors exhibit some of each, collecting things because they like them but also hoping to come out well or at least financially okay with the collectibles they buy. Occasionally, the scales start tipping too far in one direction, with buyers overpaying because they like something too much, or because they think they will makes a ton of money, always unlikely.

The Aristophil scandal was a prime example of financial greed taking over, investors pumping lots of money into collections of overpriced manuscripts. A decade ago, the President of ILAB (International League of Antiquarian Booksellers) issued a caution, “The International League of Antiquarian Booksellers does not encourage collecting books for investment purposes...If, and I say if, it is an investment, than it is a long-term investment, a savings account, and you use money that you're sure you won't be needing for a long, long time, and nobody guarantees you anything. If you're looking for a quick return on investment, forget it. The bottom-line is: don't buy them as an investment: it is the wrong angle to look at books. Buy them because you love books.”

Good advice, not always taken. You can now buy fractional shares of classic books. Rally Rd. offers such shares. For $7, you can buy a one ten-thousandth of an interest in a first edition of Moby Dick. It will need to sell for over $70,000 for you to make money, a generous price considering their image appears to show some foxing on the title page.

More recently, we have seen an even riskier form of collecting take hold, high risk though perhaps high rewards, at least if your timing is right. These are NFTs, non-fungible tokens. These electronic tokens allow one to claim that their copy of an electronic image, though it may otherwise be identical to every other one, is unique because it contains this token. Voila. A commodity just became a one-of-a-kind collectible.

NFTs have primarily been used with pieces of digital art, but more recently, trading cards have appeared as NFTs, and now there is a site that will help you publish your NFT digital book. It allows an eBook to be part of a limited edition, first edition, even a single unique copy. Of course, first editions and limited editions are of higher value than ordinary copies. We wrote about Creatokia's service last month.

As best I can tell, NFT books are still in their infancy and it is yet to be seen whether they will take off. NFT art has already had a spectacular run, but it appears to be crashing back to earth. It's hard to tell what their prices are because NFTs trade under the radar as they are primarily selling in cryptocurrency, itself anonymous and untraceable. But, cryptocurrencies have been crashing too. Having to sell something for half of what you paid in a currency that has lost half of its value is not a good combination. While cryptocurrency values are public knowledge, NFT values are not, but those who follow these things believe prices have dropped in this magnitude, perhaps more.

Entering into this mix are comments made by one of the world's most successful investors and richest persons, Bill Gates. His words carry weight with some. Of course, if you think Bill Gates is implanting microchips in people through Covid vaccines so he can track their activities, you may not be fond of him, but even crazy people need be cautious when investing. During a recent interview, Gates joked, sarcastically, “Obviously expensive digital images of monkeys are going to improve the world immensely and that's so incredible. Anyway, I'm used to asset classes where like a farm they have output or a company where they make products. You have an asset class [NFTs] that's 100% based on sort of greater fool theory that someone is going to pay more for it than I do.”

For those not aware, the “monkey” joke refers to the seemingly countless different NFT images produced by the so-called Bored Ape Yacht Club. These are very unspecial NFT cartoon renderings of apes but they have developed a large following, including many celebrities. There is no skilled art here, but then again, there was nothing special about pet rocks vis-a-vis other rocks but that did not discourage their popularity in their day.

It should be noted that Bill Gates owns large interests in businesses, notably Microsoft, which he founded, lots of farm land, and yes, some valuable books too. He is noted for buying Leonardo da Vinci's Codex Leicester for over $30 million. He wanted the book and could afford it, but I bet if he someday chooses to sell it, despite the high cost, he will still do fine on the investment. But that is a real book you can touch and hold.

That brings us back to ILAB's advice, buy books because you love them. We would add that unless money is no object to you, research past sales prices carefully before putting too much money down. You may not need to make a profit on something you love, but you don't want to lose your shirt either. And, as for NFT books, what can I say? The risk factor just jumped by some multiple and finding authentic pricing history will be difficult. Even then, when something can double or be halved overnight, past pricing can be of little comfort. Bill Gates has made it clear he's not betting his farms on NFTs. You shouldn't bet the farm either.