Salem “Witch” Has Her Conviction Overturned 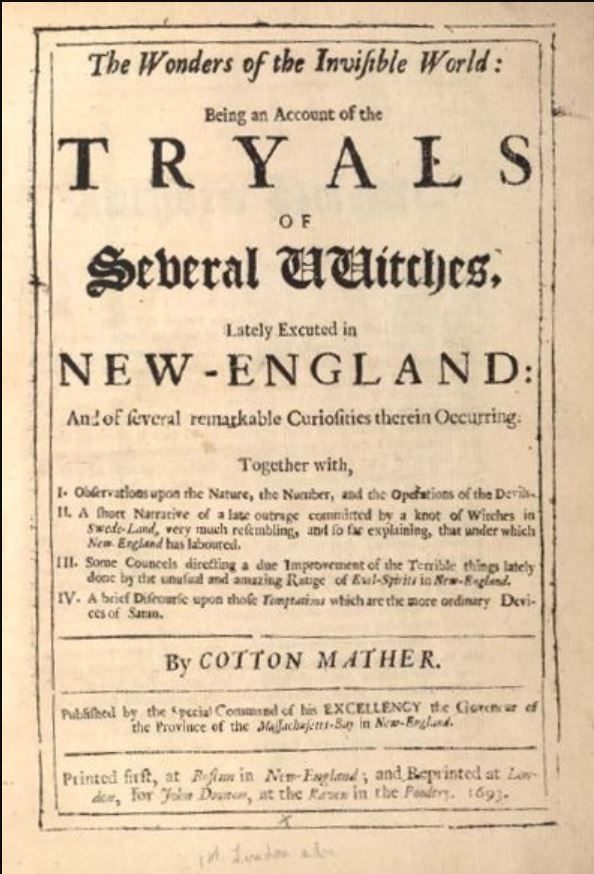 It was one of the greatest, and best known miscarriages of justice in American history. Twenty supposed witches were executed in Salem, Massachusetts, after a hysteria and kangaroo court trials in 1692. By the following year, many of those involved had come to see the error of their ways. Several convicted and sentenced to execution had their sentences vacated by the Governor, including Elizabeth Johnson. And then, there was the Rev. Cotton Mather.

Cotton Mather was the premier churchman/theologian/author of colonial America. He was a stern and opinionated man who liked to portray himself as an objective observer of events. His father, Increase Mather, was also an influential stern (but perhaps not quite so stern) church leader of the time, President of Harvard. Cotton was also a prolific writer, writing much in the way of theology, including what many consider the best history of 17th century New England. However, its his writing about the Salem “witches” for which he is best remembered today. He would have preferred everyone just forgot about his role.

When Salem children started making claims about visions of witches, Cotton Mather took it all very seriously. He somewhat cautioned about the use of spectral evidence, that arising from visions instead of reality. However, he had no trouble saying bad things about some of the suspects, and argued that witches and demons and all of this stuff was real. The Devil tried to lead Christians into sin this way, he said. America was fertile ground for the Devil since it was an attempt to build a more Godly and righteous land than those of Europe. The only question was whether this particular situation was the Devil's work, but with so many claims, and America due for an interference in its affairs by the Devil, it was easy to understand how people would have seen Mather's limited cautions as being just a formal acknowledgment of objectivity. They proceeded full speed ahead and Mather did nothing to stop them. He even invited one of the children to stay in his home.

By the end of the year, people were starting to have misgivings over what was going on. Early in 1693, 20 executions later, the Governor vacated the sentences of those awaiting execution. That was the year in which Mather published his most famous book, The Wonders of the Invisible World, full title The Wonders of the Invisible World: Being an account of the tryals of several witches, lately excuted [sic] in New-England: and of several remarkable curiosities therein occurring. In it, Mather again tries to play the role of objective observer, stating the case presented against those found guilty (but not their defenses).

Even as others were questioning their behavior, Cotton Mather continued on about how the Devil was trying to destroy the work of Jesus' servants in the new Promised Land. Writes Mather, “The New-Englanders are a People of God settled in those, which were once the Devil's Territories; and it may easily be supposed that the Devil was exceedingly disturbed, when he perceived such a People here accomplishing the Promise of old made unto our Blessed Jesus, that He should have the Utmost parts of the Earth for his Possession... And we have now with Horror seen the Discovery of such a Witchcraft! An Army of Devils is horribly broke in upon the place which is the Center, and after a sort, the First-born of our English Settlements: and the Houses of the Good People there are fill'd with the doleful Shrieks of their Children and Servants, Tormented by Invisible Hands, with Tortures altogether preternatural.” So much for Cotton Mather, the objective observer.

In short order, jurors signed apologies for their behavior, the people of Salem were embarrassed. Many of the witnesses recanted their testimony. Within in a few years, most convicted were exonerated, payments made to their families for the grave injustices. In 1711, further exonerations were made, monetary reparations paid, rights and reputations of those convicted restored. Boston merchant Robert Calef wrote a biting criticism of Mather and the Salem Witch Trials, More Wonders of the Invisible World. It summed it all up well. Mather never admitted to his grave errors or wrongdoing though he lived until 1728.

And so it all came to an end three centuries ago. Apologies were made, reparations paid, and while nothing could ever undo the wrong, there was not much more that could be done. But, one case remained unatoned. Elizabeth Johnson, Jr., was missed in the earlier apologies, her conviction never erased. She attempted to have it reversed, but after 1711, Massachusetts wanted to put it all in the past. After all, Ms. Johnson had been freed, not executed. Her case no longer seemed of much importance. Not having any children, she had no descendants to argue her case in the years and centuries hence. Every “witch” had their convictions erased, except Ms. Johnson. She remained on the books as a witch, convicted of witchcraft.

Two years ago, this long-forgotten injustice was uncovered by the Eighth Grade class of North Andover Middle School. They became Elizabeth Johnson's surrogate descendants. They fought her forgotten case. And a short time ago, their efforts were rewarded. Three hundred, twenty-nine years after she was convicted of witchcraft, Johnson has had that conviction wiped from her record. She is innocent again, just like in 1690. She is the last to have her good name restored. We don't know what became of her, where she went, when she died. But if she is still around and once again walks the streets of Salem, she can hold her head high. She is a witch no more. It was overdue.