Required Reading: Booked by Fate by Phillip Pirages, a Bookdealer 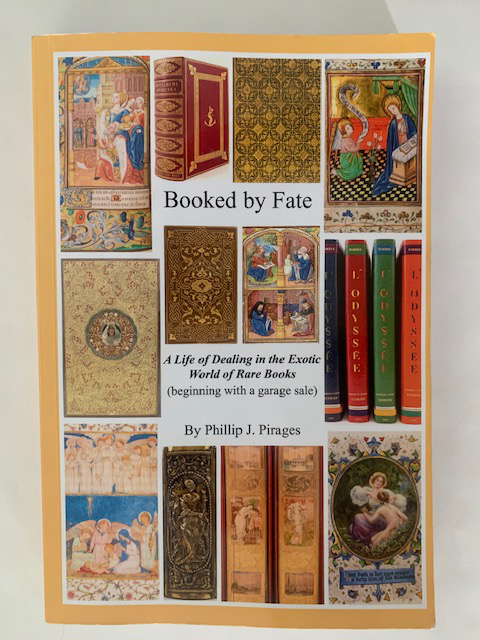 Mr. Phillip Pirages has written a book about his on-going career as a dealer in collectible paper.    I have observed that bookdealers live two distinct lives.  Among dealers they share their experiences and observations while concealing information about their customers.  Dealers certainly have many dealer friends but few openly discuss clients, simply because, client relationships are difficult to develop and even a friendly dealer may alter a prized relationship.

The rule has long been:  omertà.

Mr. Pirages, a dealer with a Ph.D., may be rewriting it.

When bookdealers write about customers the latter are usually dead.  Mr. Pirages waives that requirement and uses the opportunity to tell an interesting story about how he became a rare paper dealer.  He’s very smart and successful.

Writing in the present tense he gives perspective on how he runs his business, providing a sense of how he selects stock, builds staff and sells, inviting by implication, to compare how similar businesses manage theirs.  Think of it as a master class for dealers while openly and clearly stating his objectives are wider – to also reach the collecting and institutional classes.  It’s ambitious, commendable and needed.

He was not to the manor born, not many are.  His path to becoming a bookdealer was through education all the way up to earning a Ph.D. in literature.   An early encounter with a rare book introduced him to his life’s work:  the discovery, study, and selling of collectible paper, as in literature, early manuscripts and printed books.  Since 1988 he’s been a member of the ABAA.

His specialties are narrow, complex and sophisticated and among the many specialties listed [by link] on the ABAA home page, his take money and knowledge to handle.  It’s clear he chose the tough stuff.

Mr. Pirages then recounts the many steps, follies and successes he experienced culminating in his encounter with Jay Walker who would become his principal client.  Mr. Walker is among the book collecting giants of this age.  Enormous collecting ambition, deep pockets, and collecting success is a combination that is as rare as complete a Gutenberg.  His collection is so substantial it has a name:  Library of the History of Human Imagination.

It has been said among the trade for decades that there are no new collectors but it’s been apparent on RBH during our 20 years building Transactions+, new collectors are trying.  Think what the field would be like if there were 10 Jay Walkers.  My experience suggests many would like to try.  If they can avoid failure while learning to understand how the market works, some will become long term players, too.

That Mr. Walker continues to collect suggests Mr. Pirages is as unique as Mr. Walker is.  Most potential great collectors' collecting ambitions die during their first two years.  They are vulnerable until they become aware of the interrelationship between condition, asking prices, liquidity and market value.  Five copies listed online at similar prices doesn’t mean anything.  During that time it’s easy to buy junk.  Mr. Pirages must have protected him.

For any dealer, advising the potential next Mr. Walker can be a once in a lifetime opportunity for them and the field.  Resisting the temptation to soak them when they have stars in their eyes, is vital.  Collectors once damaged, often walk away.

Booked by Fate explains how he and Mr. Walker found their sweet spot.

How to keep auctions and booksellers in line is the question.  To do that we’ll need a common set of rules.  Think about saving their early optimism as the key to their long term involvement.  We all lose when they realize they have been conned.  It’s tough to recover from disrespect or humiliation.

It appears to me RBH should be part of that solution.

Looking beyond Booked by Fate as a catalyst for collecting, be mindful there are other perspectives such as those of auction houses, collectors, rare book historians and librarians.  Many perspectives and memoirs have been written.  To understand the field broadly the emerging generation of collectors should be reading them too.  Think about collectible paper as a Rubik’s Cube.  Don’t be in the dark.

A list of suggested titles mentioned by Nick Aretakis of the William Reese Company and Selby Kiffer of Sotheby’s include:

Rosenbach’s Books and Bidders and A Book Hunter’s Holiday

Rosenbach Abroad:   In Pursuit of Books in Private Collections, by Leslie Morris

Fifty Years a Bookseller: or, The Wolf at Your Door, by Clarence Wolf

Old & Rare:  Thirty Years in the Book Business, by Leona Rostenberg and Madeline B. Stern

Adventures of a Treasure Hunter, by Charles Everitt

The Bookseller’s Apprentice, by George Goodspeed

The Last Bookseller:  A Life in the Rare Book Trade, by Gary Goodman

A Pound of Paper, by John Baxter

“With All Faults”, by David Low

Low Profile:  A Life in the World of Books, by Frank Hermann

Taken altogether, Mr. Pirages’ book is a beautifully written document, some 335 pages that inhale quickly.  He’s a complex guy and his book is too.  He provides a traditional text with random floating boxes of boldfaced boxes, explanations, and/or background to encourage or reward a deeper understanding.  As well, to better understand the author, it’s recommended to view the attached interview posted by the ABAA.  It’s a 30 minute video about Mr. Pirages in 2019 and you’ll quickly understand why Mr. Walker engaged him.

To have a more complete impression about Mr. Pirages:

Click on this link to see him in person.

If you have the urge to buy a book, buy this one.  You’ll be a better collector for having done so.