Deshoulières 1691: a not so casual little book 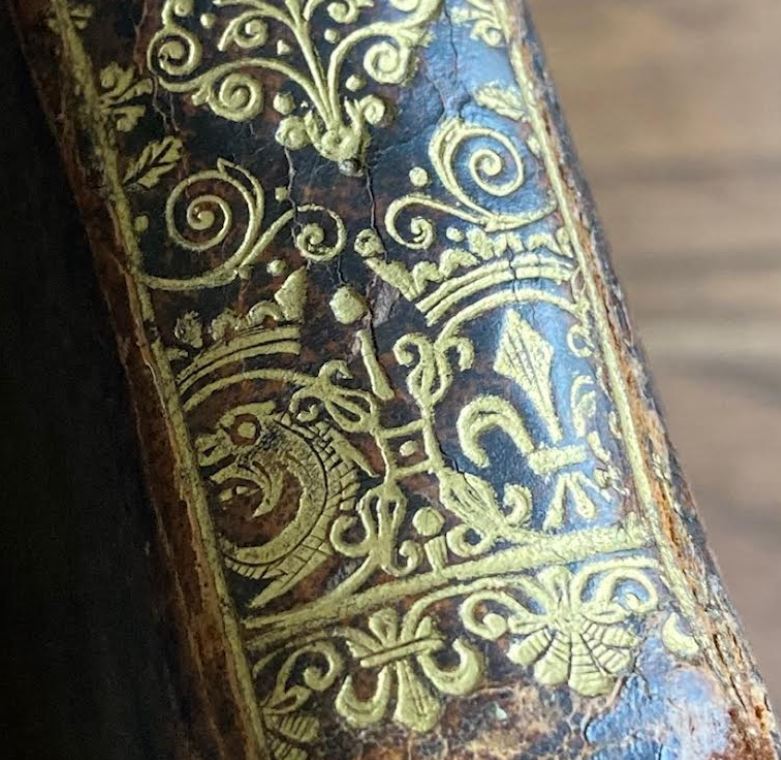 Crowned dolphin on the spine.

A copy of the 1691 edition of Mme Deshoulières’ works made me realize that an old book is never as insignificant as it may seem. Especially when a crowned dolphin is swimming on its tail!

Although totally forgotten today, Mme Deshoulières is probably the best French female poet of the late 17th century. The first collection of her poems was published in 1688 by Sébastien Mabre-Cramoisy’s widow. The book was pirated the same year, and Cramoisy’s widow put out a second edition as soon as 1690. Yet, in 1691, the “privilege”—or rights of the book—ended up with another printer, namely Jean Villette, who put out his own edition right away. Coming across a copy of this later edition, I expected it to be just another book—I was wrong.

The 1691 Jean Villette’s edition has a title page of its own with the printer’s initials and the year of printing. Yet the vignette of the second page attracted my attention—it looked familiar. So did the one on the next page. Actually, they are the same as those featured in the Cramoisy’s 1688 edition! A comparison of both editions confirmed that these two books are actually... identical—well, almost. Not only are the vignettes identical, but I also spotted the same little defects of printing: the alignment of some letters, some marks of printing, etc. So, the 1691 Villette’s edition is not a “true” edition but the unsold copies of the 1688 one with a new title page. This mystery is partly explained by the “privilege” of another edition, the 1693 one, which is actually the first true Villette’s edition. It reads: “The rights and privilege for this book have been sold to Jean Villette Junior (...) during the public sale of the stock and reserve of the bookshop belonging to the widow of Sir Sébastien Mabre Cramoisy that took place in Paris on June 9, 1691.” This probably included an unsold stock of the 1688 edition—although the second edition of Cramoisy’s widow (1690) is different from the first one.

The 1688 and 1691 editions offer the exact same contents in the same order, the same printing defects—until page 221, and the Epistle dedicated to the Duke of Bourgogne. This piece that runs on 7 pages is absent from the 1688 Cramoisy edition and the printer’s indication “*Eij” at the bottom of page 221 shows that they were added later on (the indication on page 219 reads “Ec ij” without asterisk and the one on page 229 “Ec iij”, meaning there should be no gap between them). The typography of this additional epistle is identical but the table of contents doesn’t even list it. Even the “privilege’, reproduced at the end of the book is the same as the 1688 edition—Villette’s name is not mentioned anywhere. So this is the 1688 edition with a new title page AND a new epistle. Villette probably decided to capitalize on the popularity of this piece, which came out as a brochure in 1691 (Paris, chez Jean-Baptiste Coignard, 1691), and was read at the prestigious Académie française on May 5, 1691.

Contemplating my “much-more-precious-now” copy, I noticed a detail on the contemporary binding: the binder used an unusual iron at the tail of the back. It represents a crowned dolphin standing next to a fleur-de-lys—the attribute of the King of France. But wait! Wasn’t the added epistle dedicated to the Duke of Bourgogne, who was actually Louis XIV’s younger son—so a Dauphin, or dolphin in English! Was this book coming from the royal Library, and this mysterious epistle added on purpose? Damned! Couldn’t find any other copy of the 1691 edition on the Internet—rare, as they say. So I started to investigate on this lovely crowned dolphin. It took me a while but I eventually found a rejoicing obscure Facebook group named “Pour la connaissance des reliures dites “à la roulette au dauphin couronné”—Sharing knowledge about the bindings “with the crowned dolphin iron”. It boasts of 52 members. The French bookseller Bertrand Hugonnard-Roche from L’Amour qui bouquine bookshop started it, and many book maniacs share pictures of their “crowned dolphin iron’ bindings there. Hugonnard-Roche unfortunately put an end to my great expectations: “This dolphin has nothing to do with the Dauphin’s collection.” Then he added, quite mysteriously: “At least very rarely.” On his blog, he wrote a short piece about this iron: “It was used between 1680 and 1710, roughly. Although some people sometimes claimed it was the mark of the Dauphin’s collection, it is not the case—this ornament appears on books that were published long after his death and that have never belonged to him. It is but an ornament.” As such, he goes on, it adds nothing to the value of a book—or very little. This is just another of those numberless lovely details linked to old books. Several members of the group underlined that it is often found on books published by Estienne Michallet, but as usual one answer raises another hundred questions.

The mere existence of such a Facebook group made my day. So I checked my humble collection and—what? Here it was, a crowned dolphin on the tail of another book! And guess what, it’s another Villette’s edition of Deshoulières’ work. Hugonnard-Roche can extend his research domain: this is the 1739 edition! So this nice little iron was still around 59 years after it was first used. Like privileges, irons were going around.