Ukrainian Publisher Issues Edition of Go the F*** to Sleep 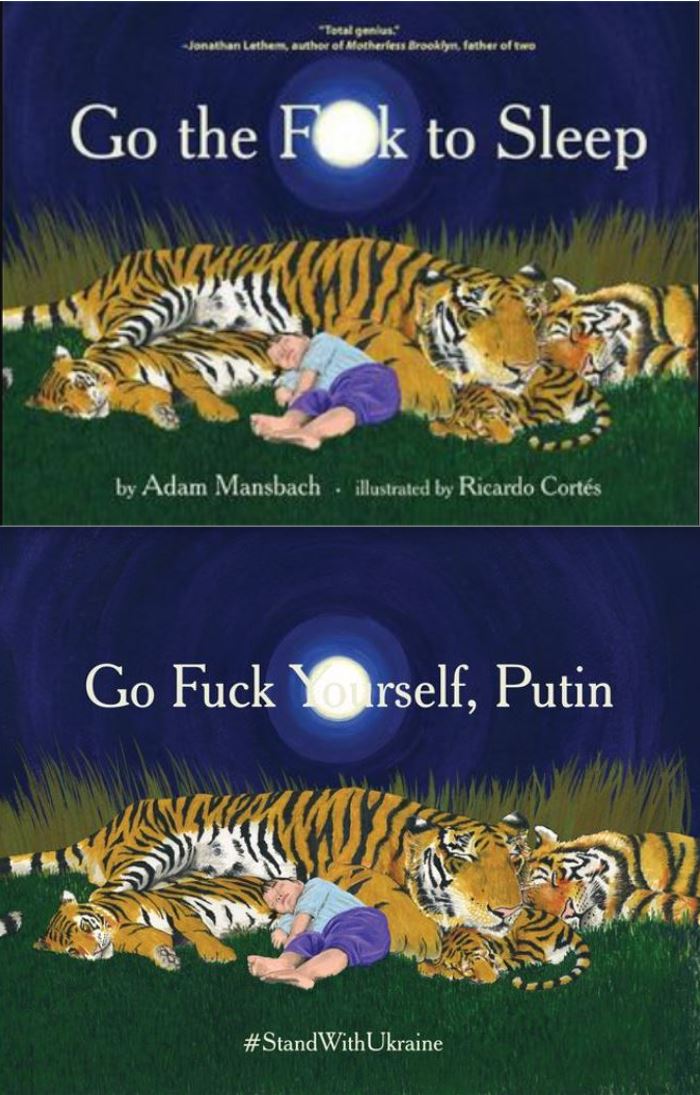 In the midst of the terror and killing that is Ukraine, a book is being published. It is, perhaps, not what you would expect, Adam Mansbach's Go the Fuck to Sleep. It has been translated to Ukrainian so people there can appreciate it.

Mansbach wrote this story out of the frustration everyone who has ever raised young children will understand. They will not go to bed when they need to, and more importantly, when you need them to. Mansbach had a 3-year-old daughter who would find all sorts of excuses not to go to sleep. Undoubtedly, he never said these words to her, but equally certainly he thought them many times. Naturally, this is not a children's book for children. It's what's known as an “adult children's book.” It's written in the style of a children's book but the audience is adults who have lived through his experience night after night.

Of course, the context of Ukraine today makes it clear that the target is not really children who do not want to go to bed. With the threat of bombs at any time, people are holed up in damaged homes and underground railway stations, cold and hungry, Ukrainians are not staying up late because it's fun. Their nightmares arise when they are awake, not asleep. Sleep would be a welcome respite.

The publisher, Vivat Publishing, is located in Kharkiv. Situated in northeastern Ukraine, it is the country's second largest city. It is also close to the Russian border, a particularly dangerous place to be. It has been and is being bombarded with heavy shelling by the Russians, targeted at civilian areas because that's what the Russians do. Despite the Russians' overwhelming weapons and personnel advantages, citizens of Kharkiv, like all over Ukraine, persist and fight back. This book is clearly an example of Ukrainians, despite dying in their homes and streets, thumbing their nose at the coward in the Kremlin who slaughters them from the safety of his fortress far away. Ukrainians remains unbowed.

Vivat issued a statement in conjunction with the release of their edition of Go the Fuck to Sleep. It states, in part, “Vivat Publishing is located in Kharkiv. All these terrible days, most of our employees have been in the epicenter of hell. Many parts of our city have been destroyed, and our people have been cynically killed. Some of our employees have lost their homes as a result of shelling of residential areas by the Russian army with weapons banned by all world conventions.

"This is genocide of a whole nation.

"We ask you to tell and spread the truth about the real situation in Ukraine.

"Now it is not the time to be silent. It is time to make difficult and important decisions that will play a role in the future of the entire planet. It is with the tacit consent of the whole world and the Russians, who cannot stop their insane dictator, that these terrible events are unfolding.

The image with this article (click to enlarge) shows the real purpose behind this book. It appeared with Vivat's message. On top is the cover of the regular book, below, the image Vivat created. Through the Hell they have endured, Ukrainians have somehow managed to keep a sense of humor. That is because they are brave and they are human. Their enemies are neither.