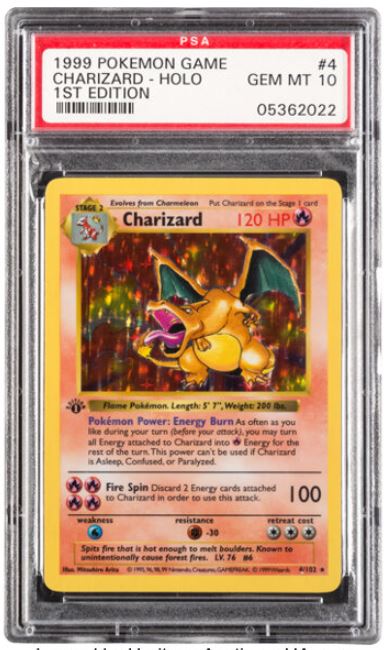 Another spectacular price for a collectible card was achieved at Heritage Auctions last month. It wasn't another multi-million dollar sports card, the price being a “modest” $336,000. However, this was for a Pokemon card, which at least ought to provide some insight into today's collectors, along with some wonderment to the parents of Millennials and Gen Zers. They're the ones who threw this stuff out when their children-collectors moved out of the house.

I know some people are wondering what any of this has to do with book collecting. More about that in a moment. First, some details about the card. At $336,000, this was not a record price for a Pokemon card. One once actually sold for $900,000, but that was from a small group of promo Pikachu cards from Japan in Japanese. This appears to be the highest price for a card from a regular English set (though complete sets have sold for more).

This card came from the first edition base set of English trading cards and was in the highest condition rating possible – PSA 10. It was for a Charizard card. For those not thoroughly familiar with Pokemon characters, Charizard is Charmander all grown up. While Charmander is a cute, endearing little lizard-like creature, the grown-up Charizard is a fierce fighter and not one to get on the wrong side of. It is a 199.5 lb. fire-breathing dragon who can incinerate you with a single breath.

Now, what does any of this have to do with book collecting? A lot, actually. Book collecting has long encompassed more than what is implied by a narrow interpretation of the word “book.” It has included other bound paper items, such as booklets, pamphlets, magazines, catalogues and brochures, along with unbound paper items such as manuscripts, maps, newspapers, letters, prints and photographs. It has all been subsumed under the description “works on paper.”

In recent years, we have seen an enormous rate of growth in two particular types of works on paper, comic books and trading cards. Trading card collecting generally has been focused on baseball and other sports cards, but now we are seeing that expand. That brings us to this recent sale and the rapidly growing interest in Pokemon cards. Sports cards, and the once popular carte-de-visite, have been around for over a century. Pokemon cards are only slightly over two decades old. This is something new in more ways than one.

Elsewhere in this month's issue of Rare Book Monthly, we have written about the Honey & Wax book collecting prize for women collectors age 30 and under. What we discovered is that the elusive new book collector isn't fictional after all. They exist. It's just that their collecting focus is different. Whether it is other forms of paper or unusual topics, youth is charting its own course when it comes to collecting.

By and large, people like to collect things with which they were familiar when they were young. Everyone for the past five centuries has been familiar with books from their youth. For most of that time, books were the only source of information and entertainment from the outside world. However, radio and later television made baseball players household names. For more recent generations, cable television and the internet has done the same for other sources of entertainment, including Pokemon.

This makes the breakthrough prices on Pokemon cards all the more significant. Pokemon is a 1990s phenomenon. While I don't know for certain who is buying collectible Pokemon cards, it's hard to imagine they would have much appeal for people over the age of 35. Pokemon would not be a part of their youth. These are almost certainly the focus of new collectors.

This sale led us to search through the auction records to see how many books published from Pokemon times, the 1990s to the present, have sold for as much or more than this Pokemon card. I found only one. A single copy of the first edition of Harry Potter and the Philosopher's Stone, the first Harry Potter book, sold for $471,000 last year. That's it. The number of Pokemon Charmander cards sold for over $300,000 equals the total number of books first published after 1990 that have sold for that price. I know this is a small sample, but don't be surprised to see the trend continue as new collectors replace old ones.

Some older people will scoff at the significance, even the relevance of this sale. Older people do a lot of scoffing. Those in the book trade do need to take the interests of younger collectors seriously. We may wish younger people preferred Shakespeare to Pikachu, reading books to watching Tik Tok videos, but that is not our choice. We can try to influence, teach, share experiences, but ultimately, we don't get to decide for them. We retain the right to choose what we like, but we do not have the right to make those choices for others. As the Baby Boomers' musical and poetic voice warned, the times they are a-changin'.