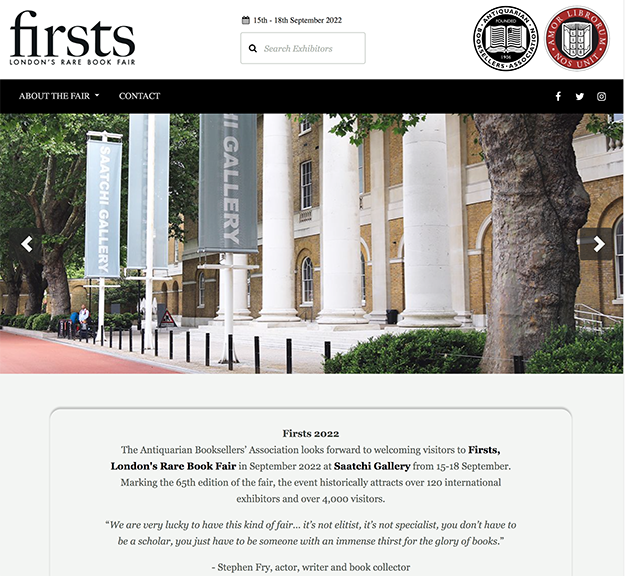 The desire to browse and buy is strong!

Book fairs have been the early and consistent victims of COVID and it’s time to say The Empire Strikes Back!  In-person buying and selling in the collectible paper field has long been a vital component and COVID particularly damaged shows.  It is a wonderful sign that normalcy is breaking out.

The United Kingdom has been particularly diligent to call for its population to be vaccinated and this recently has permitted government to relax the prohibition of larger gatherings.   The immediate outcome was to stage Firsts in London.

This said we’ll simply let the show’s PR department jump on the main table and dance a jig intoning, free at last, free at last.   Congratulations!

Press Release: Exhibitors and fair organizers declared the 64th edition of Firsts, London’s Rare Book Fair a resounding success, with visitor numbers up almost 30% on the 2019 edition and strong early sales setting the tone for what proved to be a productive four-day event for exhibitors.

The Antiquarian Booksellers’ Association’s premier event, which took place from October 21- 24 at Saatchi Gallery, welcomed 4,500 attendees this year – a record number of visitors – despite having to overcome travel restrictions and other pandemic-related challenges to event attendance.

“I think it is safe to say our expectations have been exceeded. We were frankly delighted with the footfall at the fair this year, which was close to 30% up from the 2019 edition despite having far fewer exhibitors participate. It was particularly exciting to see the fair attract a much younger and more diverse audience, a testament to the new venue’s more central location and wider appeal,” said Pom Harrington, Chairman of Firsts.

“The fair’s move to Saatchi Gallery has undoubtedly proven successful in attracting museum and institutional buyers, existing and new private collectors, as well as rare book enthusiasts from across the UK. The vast majority of participating exhibitors across all three floors of the new venue recorded stronger sales than in previous years,” said Pom.

The total reported sales were greater this year with 83 exhibitors than with 2019’s 130 exhibitors, with average sales as well as median sales up. Exhibitor sales were recorded across the 4-day event – with early sales at the private opening reception setting a positive pace for the rest of the fair.

“I’m pleased to confirm that Firsts London will return to Saatchi Gallery next year and has been secured as a venue until 2024. This was the very first year the ABA received a unanimously affirmative response from every participating exhibitor that they would either return or consider returning next year – an unprecedented result given the many challenges we’ve had to overcome in the past 18 months in bringing back the physical book fair,” added Pom.

Looking ahead to next year, Pom continued “We can confidently say that we anticipate 2022 to be very popular. We normally have 50 to 60 overseas exhibitors and this year we had 12 – unsurprising really, given how challenging things have been. I am very confident, however, that next year will be very different and we look forward to welcoming back a much larger international contingent of exhibitors for an even stronger fair.”

The 65th edition of Firsts, London’s Rare Book Fair is scheduled to take place 15-18 September 2022 at Saatchi Gallery, with Antiquarian Booksellers’ Association’s smaller Chelsea Rare Book Fair scheduled for 29-30 April 2022 at the Chelsea Old Town Hall.  Online editions of the rare book fairs will continue to take place quarterly, with the next ‘Firsts Online’ due to take place on 2-7 December 2021 at www.firsts-online.com.

The Fair’s Chairman and Committee wish to extend their thanks to the fair partners and sponsors, Biblio.com, The London Library, Richard Thompson Insurance Brokers and The Antiques Trade Gazette for their continued support of the Antiquarian Booksellers’ Associations fairs and events.