The Ricky Jay Collection is Reappearing! 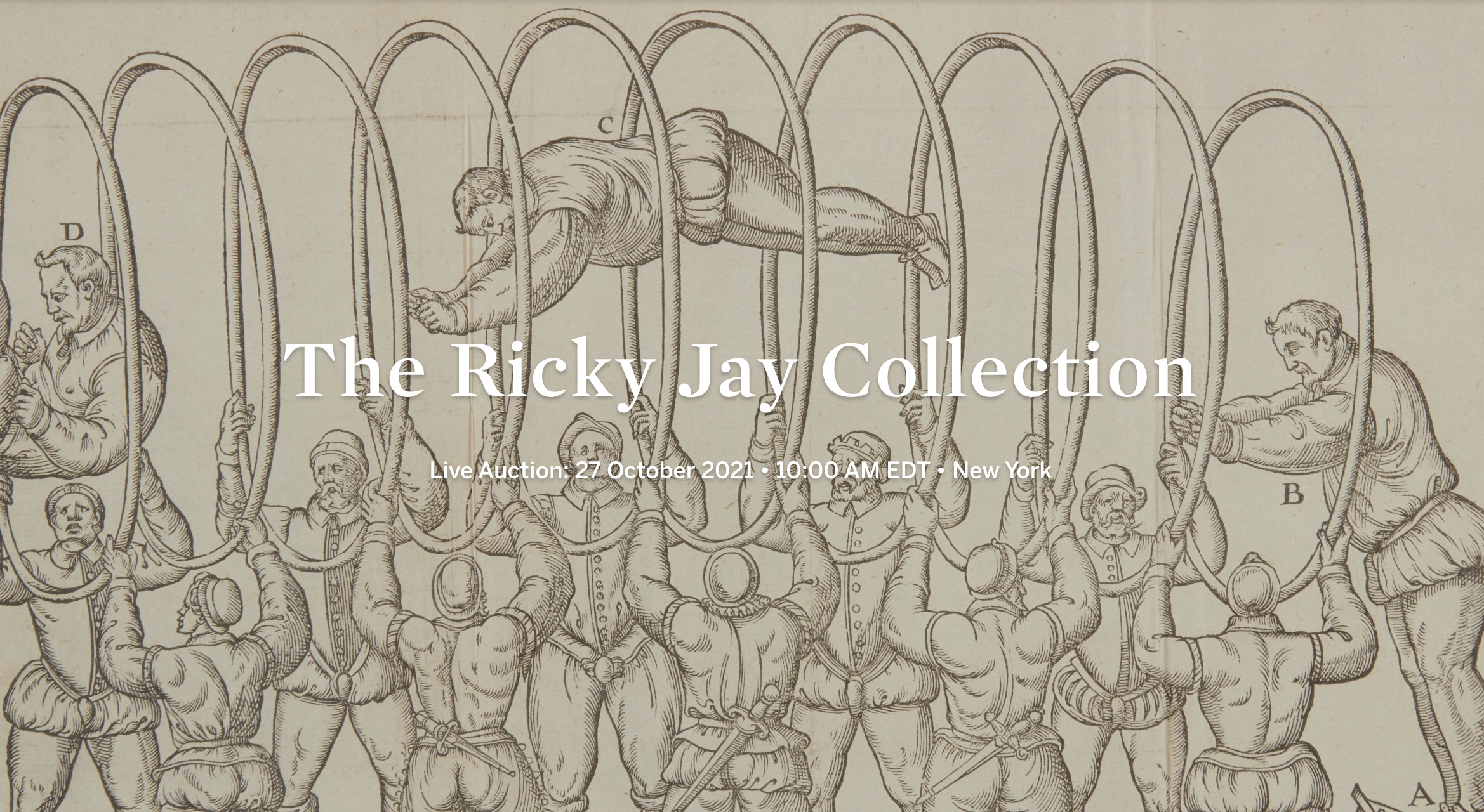 On October 27 and 28, Sotheby’s will devote four live auction sessions to The Ricky Jay Collection, the auction house’s largest live sale since the dispersal of the Robert S Pirie Library in 2015. More than 630 lots, comprising more than 2,000 items and spanning all aspects of magic and its allied arts will be on offer: books, posters, broadsides, manuscripts, photographs, apparatus, and all manner of other material and ephemera.

A masterful sleight of hand magician, actor, author, and scholar, Ricky Jay was a familiar and welcome sight at Book Fairs around the world and counted many book dealers among his friends. Jay documented his collection in a series of well-received books, beginning with Learned Pigs & Fireproof Women (1986), continuing with Extraordinary Exhibitions (2005), and culminating with Matthias Buchinger: “The Greatest German Living” (2016). For anyone who has looked at the illustrations in these books, or in Jay’s Journal of Anomalies, with a sense of wonder and disbelief, now is the opportunity to add these arresting—often literally incredible—images to their own collections.

The great magicians are all represented in brilliant color lithograph posters, whether they specialized in close-up magic or large stage illusions : John Henry Anderson, Blackstone, Carter the Great, William Robinson as Chung Ling Soo, Thomas Nelson Downs, George Heller, Alexander Herrmann, Alois Kassner, Harry Kellar, Servais Le Roy, Max Malini, Nevil Maskelyne, Charles Morritt, the Great Nicola, Chevalier Ernest Thorn, Howard Thurston, Von Arx, and, of course Harry Houdini. Houdini is represented by some of his earliest and most uncommon posters, including the 1895 “King of Cards,” probably the earliest solo Houdini poster ($20,000–30,000); the ca. 1903 “Houdini in Russia,” which commemorates one of his most famous escapes ($30,000–40,000); “Houdini Upside Down in the Water Torture Chamber” from 1913–1915 ($40,000–60,000); and, with his wife Beatrice, in “The Original Introducers of Metamorphosis” from 1895 ($25,000–35,000). Material from some of the many escape artists inspired by Houdini is also available, including a challenge poster for his brother, Hardeen ($1,500–2,500); George Zachs ($2,000–3,000); and, most notoriously, Miss Undina, whose copycat act Houdini successfully sued to suppress ($15,000–20,000).

In addition to magic, circus acts are well represented, particularly of the equestrian and daredevil variety: Signor Bagonghi (Giuseppe Bignoli)  with Barnum & Bailey ($1,500–2,500); a 1767 handbill for Mr. Price's Original Feats of Horsemanship ($800–1,200); Willy Manns’s “Todesritt” for Circus Corty-Althoff ($2,500–3,500); and Aloys Peters performing the iron neck jump that eventually cost his life ($1,000–1.500). But acrobats and wire walkers, jugglers and strongmen and strongwomen, sword swallowers and ventriloquists are all to found as well.

Books run throughout the sale, both “how-to’s” and early histories of magic, beginning with the very rare 1584 first edition of Reginald Scot’s Discoverie of Witchcraft ($50,000–70,000). Also from Jay’s bookshelves are Alberti's 1747 I giochi numerici fatti arcani, with engraved plates illustrating sleight of hand tricks ($2,500–3,500); the Abbé Bellecour's Academy of Play (1768; $700–1,000); A. B. Engstrom's Humorous Magician Unmasked, which first explained how to produce a live rabbit from a borrowed hat (1836; $8,000–12,000); Philip Thicknesse's Speaking Figure and the Automaton Chess-Player Exposed and Detected (1784; $5,000–7,000); and extensive runs of cant dictionaries, various editions of the redoubtable conjuring guide Hocus Pocus; and numerous works describing the perils of gambling by J. H. Green.

Not lacking from the sale is material dealing with perhaps Ricky Jay’s favorite subject, Remarkable Characters. Learned pigs are here in abundance, as well as fireproof women, though fewer in number. George Anderson, the Living Skeleton, is here, as are Sarah Beffin, the armless artist; Stephen Bibrowski, who exhibited as Lionel the Lion-faced Boy; the Blazek and Hilton sisters; Tom Thumb and Edward Bright and many other little people and giants. But towering above them all—in Ricky Jay’s affections at least—is Matthias Buchinger, the “Little Man of Nuremberg.”

Despite being born without limbs, Buchinger became a gifted calligrapher, among many other accomplishments. The Jay collection of Buchinger, which was exhibited at the Metropolitan Museum of Art in 2016, is without peer. Many of Buchinger’s largest and most intricate calligraphic works are present, including some really remarkable examples of micro-calligraphy. Contemporary engraved portraits and advertising handbills demonstrate the enormous fame achieved by Buchinger during his life, most of which was spent in Great Britain. Perhaps most notable among the many highlights in the Ricky Jay Collection is Buchinger’s own calligraphic family tree. Written on two overlaid sheets of paper, this is one the works that demonstrates Buchinger’s extraordinary skill with a knife or scissors as well as with a pen. Completed in 1734, and in the finest possible condition, this manuscripts records Buchinger’s four marriages and the birth dates and places of his fourteen children ($20,000–30,000).

The entire Sotheby’s catalogue of The Ricky Jay Collection can be found online: https://www.sothebys.com/en/digital-catalogues/the-ricky-jay-collection