The Unexpected Beneficiary of Stolen Books 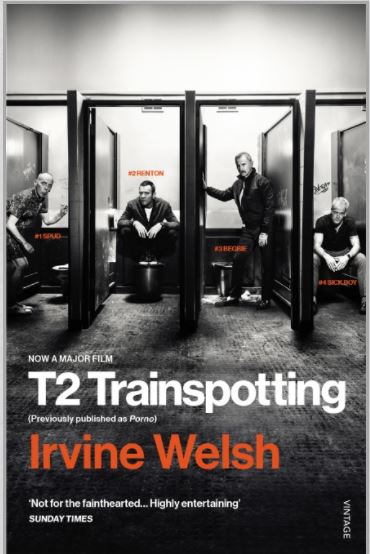 Half a century ago, Abbie Hoffman wrote a book entitled Steal This Book. That may have been tongue-in-cheek, but Hoffman wouldn't have minded. He was a political activist, a founder of the Yippies, member of the Chicago Seven, and advocate of overthrowing America's social order and its government as well. He wasn't into writing for the money. Getting his message out to as many people as possible is what mattered to him.

Half a century later, another well-known author has advocated the same manner of obtaining his book. It is probably another tongue-in-cheek advocacy, but one suspects he wouldn't be all that upset if you did. He makes a good, if unethical, point.

The author is Irvine Welsh, and the specific book in question is his first and best-known, Trainspotting, published in 1993. Its popularity was enhanced by the film version, released three years later. It looks at the lives of various drug addicts in Scotland.

One sequence involves a couple of addicts who steal and sell books so they can get their next fix. They are brought before a judge who sends one off to jail. The other and smarter one has an excuse. He has stolen a book by Danish philosopher Soren Kierkegaard. He tells the judge he stole the book to read, that he is interested in the philosopher's thoughts. The judge shoots back at the thief to tell me about the author, to which the defendant launches into an erudite sounding description of Kierkegaard's views. If you have ever read Kierkegaard, even sounding like you understand anything he said is a major challenge. He gets off.

So, how does Welsh feel about book theft? He recently appeared on the BBC podcast Midnight Meets with Colin Murray where the host said that Trainspotting is the most frequently stolen novel in British history. You could see where this was heading by Welsh's immediate response: “It's one of the few books I haven't stolen myself.” He continued, “It is a source of pride that people kind of nick it. Somebody comes up to me and goes 'I've got your books, I've got your books. I stole them all.' The subtext being yes, I say 'well look, I appreciate that because they are usually books at a bookseller on a sale or return basis. So, that means if the books don't sell the bookseller can't return them to the publisher. That means that I get my royalty. So I appreciate you stealing them because it makes double sure I get paid.'”

Leaving ethics and legality aside, he makes a good point. The “sale or return” basis means he gets paid for books sold, but if they don't sell, the bookseller can return them for a refund and Welsh loses his royalty. However, if someone steals the unsold copies, the bookseller cannot return them so no refund is due. Welsh gets to keep his royalty. Presuming this really is the most stolen novel in British history, that must be a lot of sales and a lot of royalties. The only thing hard to understand here is, why hasn't he stolen a few copies himself?