The Tribulations of Mr. N***, or Travel Through the Slave Trade 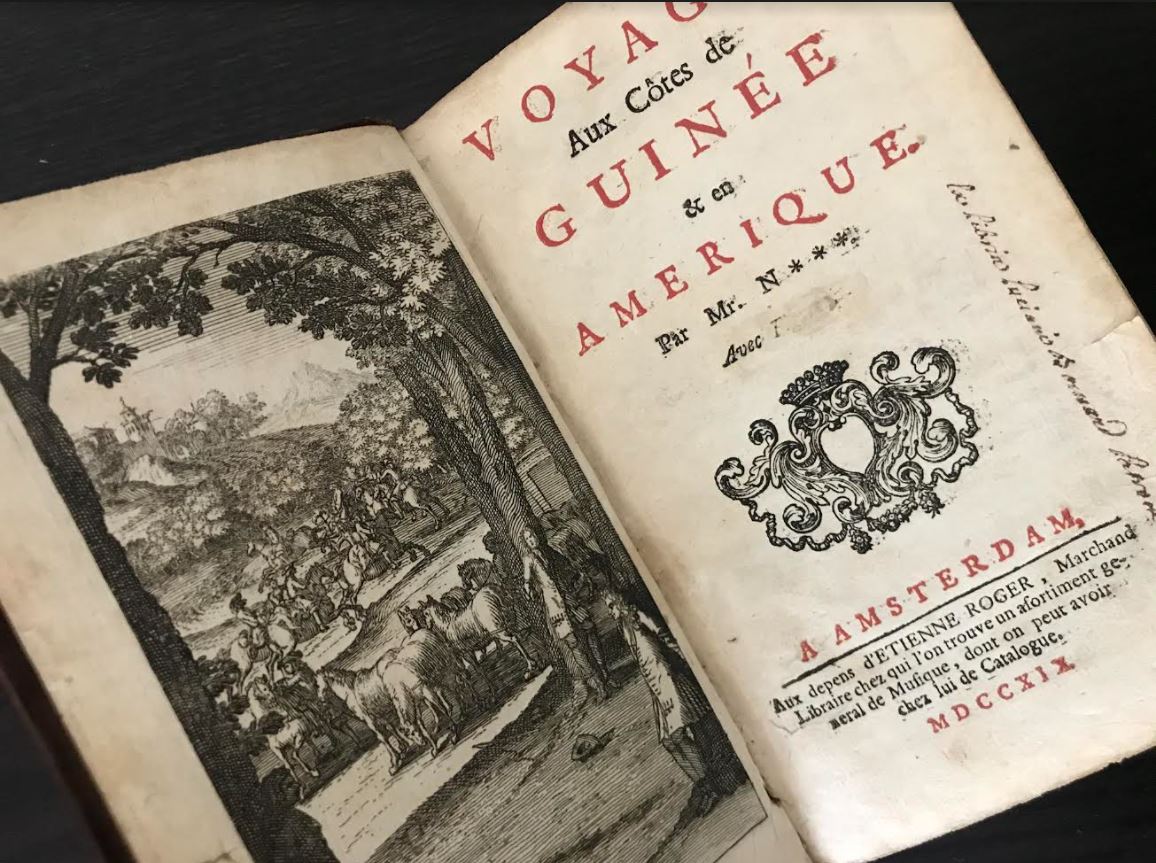 “On April 1st, 1702, I sailed from Chef de Bois, two miles away from La Rochelle, for Guinea on board a vessel of the King loaded with 50 guns.” That’s the perfect travel book incipit—straight to the heart of the action! Welcome on board an infamous slave ship bound to Africa and then the West Indies. This opening line is taken from Voyages Aux Côtes de Guinée & en Amérique (Amsterdam, 1719), an anonymous and very bizarre relation published far from the King’s censorship.

Although this book is listed in Brunet (20041) and Leclerc’s Bibliotheca Americana, its author has never been identified, and he’s only referred to as “Mr. N***” on the title page. Between 1702 and 1712, he went four times to Guinea (Africa), the West Indies and back to Europe as a private slave-trader. His relation is a peculiar patchwork. Facts, varied thoughts and harsh attacks on the “monks”, are here intermingled with descriptions of birds, trees and very precise maritime terms. All of a sudden our author writes: “Now, I’ll entertain you with a tale...” And here we go, reading about a crab grabbing a man’s intimate parts. The dozens of gorgeous engravings are not originals; they are reproduced from Rochefort’s Histoire des Antilles (Rotterdam, 1658). As far as the frontispiece is concerned, it represents an intriguing scene that seems nowhere to be found in the relation. All that made me question the veracity of this relation but some passages are very convincing and particularly interesting since Mr. N***’s freedom of tone is unique.

The first and most interesting part of the book regards Africa and the purchase of slaves: “We don’t buy Negroes without checking them out first; we watch them, examine them closely; we watch their heads, we open their mouths to see if there are missing teeth, we ask them to stretch their arms to make sure they are okay, we look at their parts to make sure everything is here, and we make them take a few steps to see if they have strong legs; every defect diminishes the price of a Negroe. (...) A handsome and good one is worth 200 French pounds; a little bit more than half of it for a female.” We know that slaves sometimes revolted and tried to escape as soon as entering the slave ships. Mr. N*** actually witnessed such a poignant uprising: “It happened on a Dutch vessel. Around 5 P.M, the Negroes seized several guns, pistols, swords, iron bars and wooden sticks. They jumped on the Whites who were on board, killing a couple and wounding several others. The uprising lasted for a good hour and a half but eventually the Whites took over—and it was high time, as the ship was about to wreck on the shore since the Negroes had cut off the cables. (...) The next morning, several Negroes were hanged from the foremast where they were left for the full day to teach the other Negroes a lesson.” Yet slaves were valuable, and Mr. N*** knew better than to ill-treat them because “when those animals have some grief, they sit on their butts, stick their chins between their knees, put their hands over their ears and die that way, refusing to eat or drink anything.” Mr. N*** and his associates bought their slaves from different African Kings along the African shore, and he describes a well organized business. “The first two days (In Senegal) were perfect; and we bought around 150 slaves.” Some died on the way to America, of course. And it did affect Mr. N***, of course; but in an unexpected way: “The crew ate a lot of sharks but I didn’t really touch them myself, as I’d noted that those animals usually fed on the dead bodies of the slaves we threw overboard.”

During slavery, sexual abuse was permanent but we are only beginning to explore this topic, and at the time, it was never evoked in travel books. But Mr. N*** had no taboo. “Despite all our efforts to prevent such thing, some people will always find a way to satisfy their lewd needs. One strong young sailor make a hole with his knife in the wall separating the males from the females—and that’s how he was able to satisfy his passion.” A female slave who witnessed this “chic choc”, denounced the two “star-crossed lovers”, and the sailor was punished. In the West Indies, many sailors and colonists experienced health problems when drinking too much and “abusing of the female Negroes.” The Monks, whom Mr. N*** hates, were also buying slaves at the market: “They’d always pick up the nicest, and the younger girls, and the best built; they never bought one who was over 30. Those brave men love tender flesh, and they look at them very closely—the front and the behind.” Like Saint Thomas, they probably needed to see before they’d believe.

Mr. N*** was clearly a Protestant—printing his book in Holland far from the police of books, he let his hatred for the Catholics run wild. The “monks,” he says, had infected the New World like a plague. “They are full of corruption, swelled with pride, ignorant, sick in their heads and prompt to quarrel (...). They are wolves in sheep clothing, deprived of faith, tenderness, patience and charity. They’ll overthrow everything to satisfy their sordid and shameful thirst for luxury; such are the masters of the Inquisition that they use to maintain and assert their authority.” Talking about the French island of Martinique, he states: “This place would be a Paradise if it weren’t for the monks. There’s no snake there; but it is infested with monks, which is worst. You have the black ones, who resemble crows; the black and white ones, who resemble magpies; the grey ones, and some white and grey like cranes; the first ones are the Jesuits, the next ones the Jacobins, the next ones the Capuchins, and the last ones the Carmelites.” Unfortunately, Mr. N***’s attacks are not always as witty nor as short—some go on for six pages! Cursing the Pope, and his creatures, denouncing the superstitious ceremonies linked to the Saints and various Catholic beliefs, he’s making some points—but grows boring. The last part of the book is a little bit tedious, and it ends up with a seven-page long poem dealing with farts. The point of this last verbal assault might not be as irrelevant as it may appear—but it is one too much.

This book that could have been shorter gives unusual information on the slave trade, and what isn’t said is also important—Mr. N*** talks about what seems relevant to him. And although the slaves amuse him, they don’t really interest him—he sees them as goods, nothing more. This is an early relation. 1702 is only a few decades away from the “true” beginning of the trade by the French, but while constantly castigating the “monks” for their lack of morality, Mr. N*** never questions his own activity. How does the old Biblical tale go? Oh yeah: you see the straw in the eye of the monks, but fail to see the beam in your own eye.