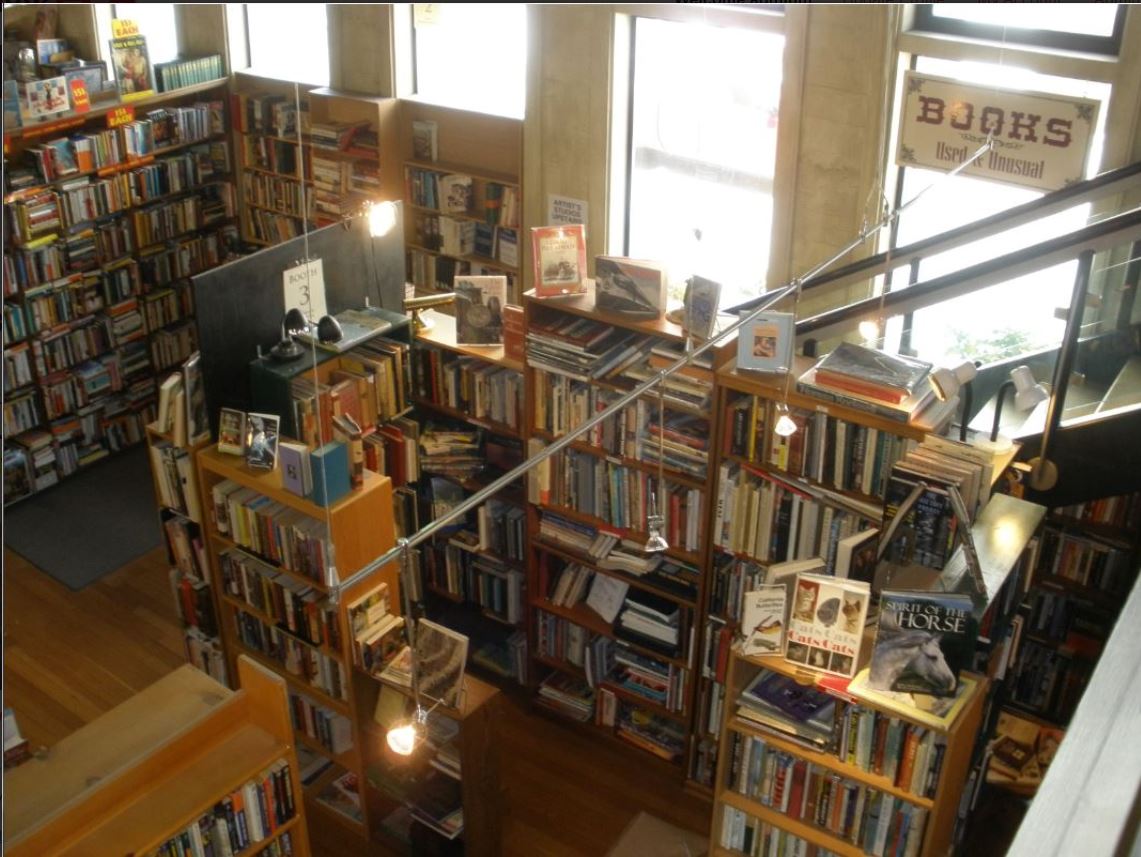 About eight years ago we joined one of the few bookstore cooperatives in the United States. It was a great choice and we have liked it very much for all the time we were there. But now, after thirty-five years in the book business, it is time for us to retire. Health and age have taken their toll. Picking up fifty-pound boxes of books is no longer sensible or possible. We haven’t quite figured out what to do with the 100 or so boxes of books in my basement yet, but we will.

So, what did we learn from the co-op experience? All in all, it was a great experience and we enjoyed it most of the time, except when I had to close the books at the end of the day. Math was not the high point of my education! All of us were experienced booksellers, mostly older, and were mostly easy to work with and, of course, I love to sell books. So, a co-op is a good way to own a bookstore without being there ten or twelve hours a day, six or seven days a week, and being responsible for everything that goes on. I recommend it for some of you booksellers who have gone out of business but would really love to have a store again. Gather together a few of your bookseller friends and form a co-op. Our store started with about five booksellers twenty-three years ago and many sellers have come and gone in between times. Another seller and I retired at the same time so they recruited three more and are up to nine at this point. The new folks are younger, but experienced, and have brought fresh ideas. Though this is a small town, it is definitely a Book Town.

The second best reason is that you don’t have to hire anyone to watch the store because you all take turns doing so. No Osha, no Workmen’s Comp, no sifting through resumes. In the co-op, as with all humans, some folks really cared more about the store than others, but that’s humans for you. But it still all worked out in the end with everything getting done.

Another great thing is the customers you meet. By and large, they are friendly and excited to be in a 4000 square foot building chock full of books on almost every subject you can think of. Especially with the shortage of bookstores nowadays; at least in our neck of the woods. As with any bookstore, there are always the nut cases and the surly customers, but who cares about them. They are mostly entertaining.

I was used to online bookselling and had been out of a retail bookstore for about fifteen years when I joined the co-op. Bookselling in a retail store had changed a whole lot from when I worked at Powell’s in Portland in the 90s. The new store was a small store in a small town, though the biggest bookstore in any town nearby and well attended, and I wasn’t sure how to pull in customers and how to price my books. The internet is rife with booksellers, most of whom have no idea what they are doing – selling $50.00 books for $5.00 and $5.00 books for $50.00. Sometimes, customers even came in the store, looked at the books, copied the ISBN or title, then would say, out loud, “We can get it cheaper online”, (so rude!) and off they would go. So, doing research on what a book was worth online and how to price it for a store occupied a lot of time at first. And I did well, I made my rent and utilities every month and took about an equal amount home each month.  As my customers got to know me and like the quality of my books, my revenues increased.

The way it worked was to have people work in the store equal hours to the number of square feet of space they “owned”. When a couple of empty booths showed up, another dealer would ask for it or someone from outside would come along. I asked for two more booths and got them. It meant working a good deal more hours, but still not like a private bookstore.

I quickly learned another lesson. At first, I had a lot of different books in different venues. If you have a subject that sells really well someone else will go out looking for those books for their area. If you have a limited space in a co-op, don’t try to sell one of every kind of book there is, pick two or three subjects that you know well and limit yourself. This is where it gets difficult because we all know that when we see a great book for sale for a really inexpensive price, no matter the subject, we have to buy it. But if you have any self-discipline, it’s not a good idea to do that. Carry a lot of good books in your three or four best subjects. Or find something that no one else is doing. In my case, that was Tarot Cards. Keep your booth tidy and your books alphabetized. Pretty soon people come into the store and go straight to your section because it’s easy to find what they want.

One thing I’ve always known is that booksellers are notoriously bad bookkeepers, myself included. A group should have at least one person who is good at it or hire someone who is, because co-op bookkeeping is complicated. And we were lucky, we had that person. She was a former accountant who liked and understood numbers, which I don’t, and though her bookkeeping methods were archaic, she did a great job of sorting out all the blunders the rest of us made and paying us at the end of each month. Also, it’s a good idea not to scrimp on things like advertising. Especially now in the virtual sales age. A perfect example is that we all knew that the best advertising we could have was a good web page and a Facebook page. But somehow, no matter how often we said we wanted it, it was always procrastinated to death.

I have to say I am happy to never have to close out at the end of the day again. It was not just my money I was dealing with, it was eight other vendors, as well. Though I did it often and made a lot minor boo boos I got to be pretty good at it, but it gave me a headache almost every time!

All in all, it was a terrific eight years. I will miss some of the people that I spent the last eight years with and a couple will remain friends for life. I will definitely miss some of my good and crazy customers with whom I had great rapport.

Because I can’t quite give up books and bookselling, I’m keeping my online business, www.thewrightbook.com. My husband and I were traditionally-rigged ship sailors for many years and have amassed quite a large and interesting library so we have launched a new web page this year, www.ageofsailbooks.com. Drop in virtually when you get a chance.

If you are itching to be a bookseller or an old-time seller who can’t quite think about opening a new bookstore on your own, think about a cooperative store. It’s great fun and can be quite profitable without taking over your whole life.