Another Record Price for a Collectible Card 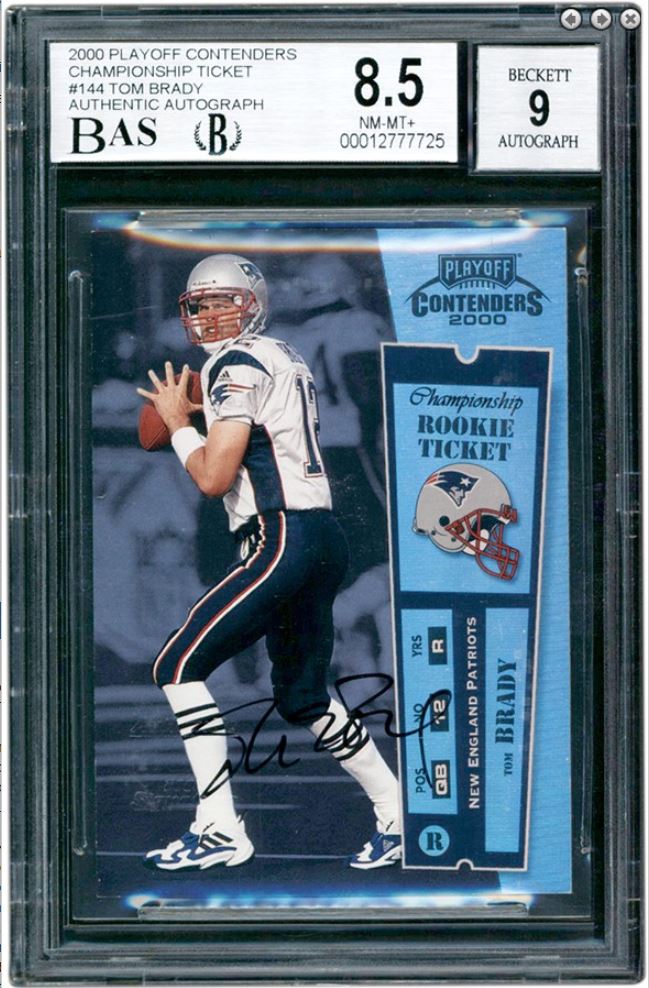 Once in a while, a collecting field becomes so hot it's hard to even keep up with what is going on. Such is the case with collector cards these days. It's reminiscent of tulips a few centuries ago, but hopefully, with a better ending.

Last month we wrote about a slew of record prices for collectible cards. Between last November and March, record prices were set for cards in every major team sport – baseball, football, basketball, hockey, and soccer. That article has already become outdated. Another record price has come tumbling down and it isn't even close. That record lasted only a month before being eclipsed by a new record price that is almost $1 million higher.

Last month, Lelands, a sports auction house, set a new record price for a football card. That price was $2.25 million, or, to be exact, $2,252,854.80. It was a rookie card for one Tom Brady, a 2000 Playoff Contenders Champion Rookie Ticket produced in “only” 100 copies. As you may know, Brady has gone on to have a very record-setting career himself. Based on this price, the complete card run, if in comparable condition, would be worth $225 million today.

What is astonishing is how fast these prices have risen. A month earlier, the same card, in very similar condition, sold for $1.32 million. That is an increase of $930,000 or 70% in just one month. This latest card was graded at 8.5, and 9 for the autograph, while the one from a month before was graded an 8 with the autograph at 10.

Making this all the more remarkable is how fast football cards had been appreciating even before the March sale. The $1.32 million paid for the March Brady card itself broke a record only one month old, and that, too, was by a large margin. The previous record was for a Patrick Mahomes card that sold for $861,000. So that was an increase in over 50% in just a month. But as they say on TV infomercials, “wait, there's more.” Another Brady card sold in January for what is believed to have been a then record price of $556,000. The Mahomes card, too, represented over a 50% increase from the previous record. Add them all up and you have an increase in the record price paid for a football card between January and April of over 300%.

So, what does Tom Brady think of all this? Interviewed on Good Morning America, Brady said, “It’s surreal, and it makes me want to go check all my cards that I have stored. There’s got to be one in there somewhere. And I kept all these cards for all these years. You know, when I was coming out I tried to make some money. My agent, Steve, was like, ‘I got a trading card deal for you. Sign a thousand cards and they’re going to pay you like 20 cents a card.’ And I was like, ‘Twenty cents a card? I’m going to be rich!’ Unbelievable. Twenty-one years later you see these cards that are worth that kind of money. I definitely should’ve kept some of them but whatever I think it all worked out pretty good.”

Now, would you like some more evidence of just how crazy the card collecting field has become? Unlike with books, there are independent grading services that will put a condition score on cards so collectors can put an informed value on them. The primary grader is PSA. Recently, they stopped accepting new cards for evaluation. The reason? They are overwhelmed. They have such a large backlog of cards to grade they don't know when they can get to them all so they have just stopped accepting any more. In a letter from PSA President Steve Sloan, he explained, “The sheer volume of orders that PSA received in early March has fundamentally changed our ability to service the hobby. The reality is that we recently received more cards in three days than we did during the previous three months. Even after the surge, submissions continue at never-before-seen levels. Given our growing backlog, it would be disingenuous for us to continue to accept submissions for cards that we will be unable to process in the foreseeable future.”

These are not some tattered old cards someone found in the attic, worth maybe a few bucks each. These are cards often worth thousands, even hundreds of thousands, once in awhile millions, of dollars. Would you like a tulip with that?