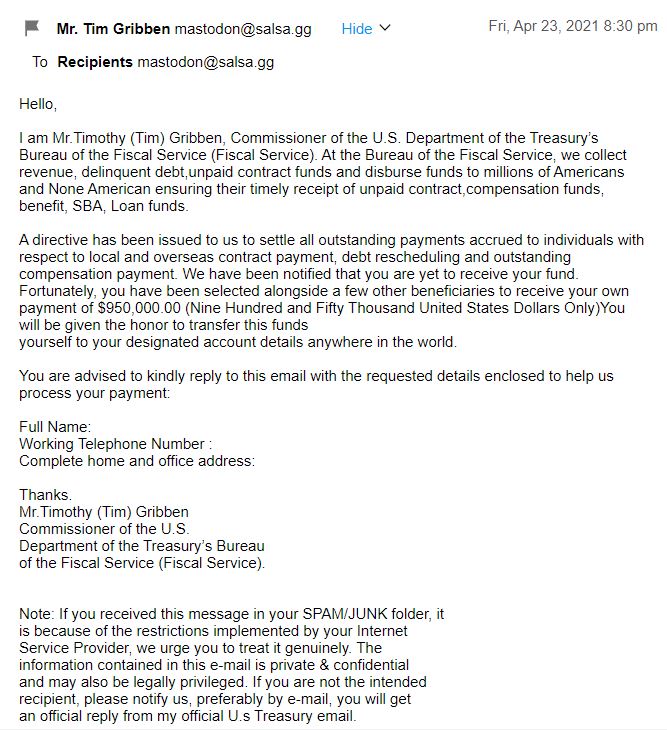 I get lots of “free” offers and I have learned to ignore most of them. They are generally for things I don't want anyway. But, when someone offers me $950,000, I do take notice. That is especially true if it comes from the head of a major bureau of the U.S. Treasury Department. They have a lot of money. This isn't even pocket change considering how much they spend. Unlike those other “free” gifts, $950,000 is something I definitely can use.

The email came from Mr. Timothy (Tim) Gribben, Commissioner of Bureau of the Fiscal Service. Now, I must admit that I was not aware of this bureau. I even wondered whether it existed, or Mr. Gribben was a real person. It turns out my suspicions were misplaced. There is a such an office and Timothy (Tim) Gribben is its Commissioner. I'm embarrassed not to be familiar with it considering the amount of money that runs through it. Their website says they “awarded $18.17 trillion in wholesale Treasury marketable securities” last year. More importantly to me, it says, “we disbursed 1.4 billion payments totaling more than $5.4 trillion.” That's on average more than four payments per man, woman, and child living in the United States. Surely one of those could be for me, and $950,000 is hardly a dent in $5.4 trillion. Maybe this is for real.

Still, I had this gnawing feeling maybe something wasn't right. His English isn't very good. I was expecting someone with such a high position in the U.S. government to have a better grasp of the English language. Mr. Gribben explained the job of the Bureau of the Fiscal Service as, they “disburse funds to millions of Americans and None American ensuring their timely receipt of unpaid contract,compensation funds...” I'm not entirely sure what that means. After informing me that I am to receive $950,000, he concludes, “You will be given the honor to transfer this funds yourself to your designated account details anywhere in the world.” That is an awkward way of saying something or other.

Still, good English isn't really a prerequisite for this type of job. It requires great facility with figures, not words. “Tim” must be a numbers person, not a language expert. You don't want someone in this position who speaks well but loses track of a trillion dollars here and there.

I also found the postscript at the end of the email odd. It reads, “Note: If you received this message in your SPAM/JUNK folder, it is because of the restrictions implemented by your Internet Service Provider, we urge you to treat it genuinely.” Would my internet provider send an email from a government office to my spam folder? That's not a very good algorithm they have there. Besides which, isn't that something my email provider would do, not my internet service provider? Then again, if they are sending out 1.4 billion emails a year offering people money, that would set off spam filters that this was a mass mailing of spam. I have explained that one away.

Then, there was one more thing. Timothy wanted me to know what to do if I thought I wasn't the person who was supposed to receive this money (as if I would tell him). He writes, “If you are not the intended recipient, please notify us, preferably by e-mail, you will get an official reply from my official U.s Treasury email.” Well, of course, where else would he send it from? That led me to check this email, to make sure it came from his “official U.s Treasury email.” This one was a surprise. It came from mastodon@salsa.gg. Mastodon? I know he uses “Tim” as a nickname, but “mastodon” too? Is he a very large man? His bio on the treasury website does not list his height or weight, so perhaps. It is odd that he would use this nickname in an official email, but for $950,000, I'll overlook it.

But... why did he send official treasury emails, offering $950,000, from an email account on salsa.gg? That can't be his official Treasury email, can it? What is salsa.gg? I looked it up. A Google search listed Salsa God as the first match. They make, no surprise here, salsa. They say it's very good, though I haven't tried it. But, their website is salsagod.com, not salsa.gg. That one is a mystery. The .gg url is from the Bailiwick of Guernsey. They are some islands in the English Channel, not officially part of the U.K. but in some way or other closely related. Why would the U.S. Commissioner of Bureau of the Fiscal Service use an email address originating in another country? Is he sending out money he should not be giving away, and if so, why did he choose me? Maybe I'm just lucky? I tried going to the salsa.gg website, but my browser warned me, “Your connection is not private. Attackers might be trying to steal your information from salsa.gg.”

I don't know. I want to believe this. Is it that you can't believe everything you read on the internet anymore? Am I going to find out that Bill Gates really didn't inject a microchip in me when I got my Covid vaccine? I did kind of wonder how you get a microchip to fit through that needle, but I do know they can make them very small these days. I guess you just don't know who you can trust, not even the U.S. Department of the Treasury.