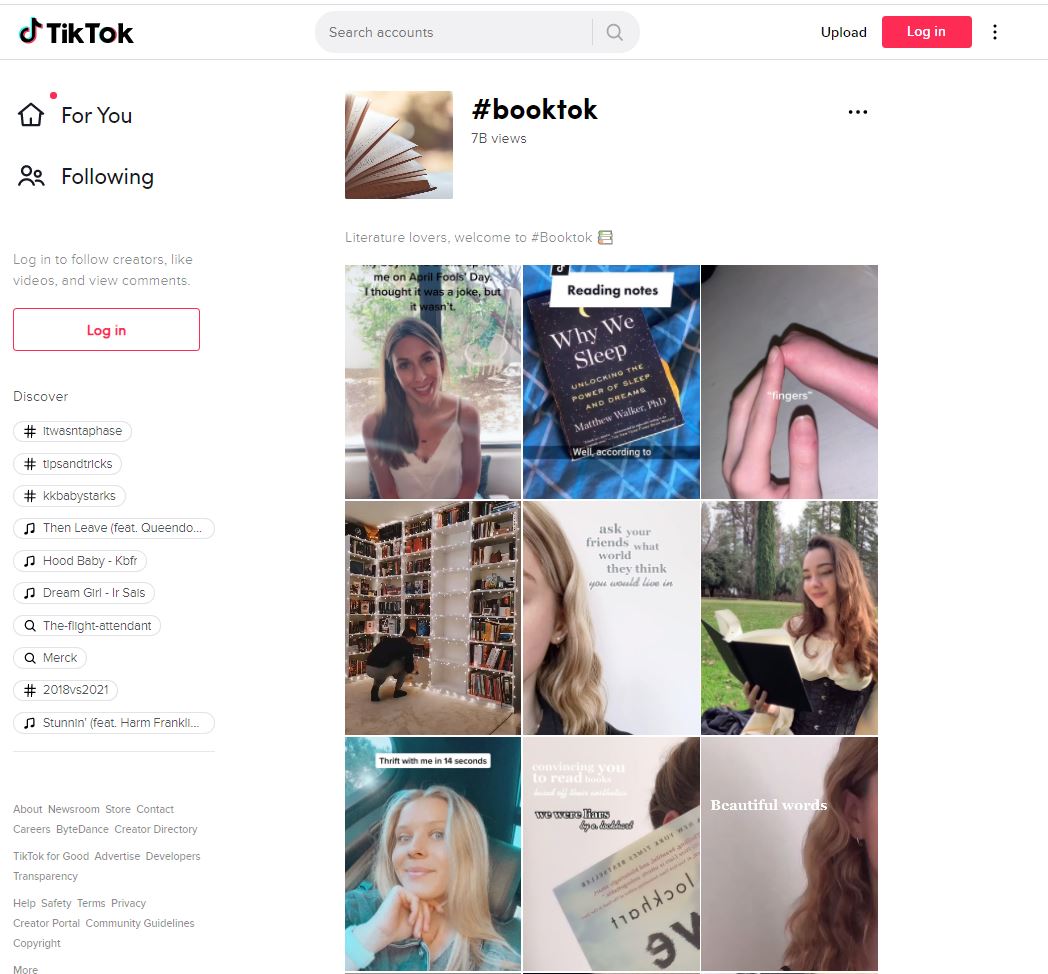 Where is the next generation of book collectors? On #BookTok, maybe? You may not be familiar with BookTok if you are over, say, 25 years old. I don't know how many people subscribe to or visit #booktok, but based on the number of people following individual contributors, it must be in the millions. For comparison, how many book collectors under 25 are there?

What is BookTok? It is a part of TikTok. Even older people probably have heard of it, if for nothing else than the Trump administration's threat to ban it in America last fall if its Chinese owners did not sell it to an American company. Neither happened. TikTok is a social media phenomenon with a short attention span. It is the visual equivalent of the textual Twitter. You can send as many “tweets” as you like, but none can be longer than 280 characters (recently raised from 140). TikTok allows you to post as many videos as you like, but none can be more than one minute long. Most are quite a bit shorter. Don't go to TikTok hoping to watch a movie.

TikTok is overwhelmingly a young person's haunt, like Facebook was once upon a time. Those who post on and view #BookTok are mostly YA (young adults). They are teens and low 20s. But, unlike general TikTok users, they are overwhelmingly female. They like to read and enjoy talking about it. Young males, evidently, fail to meet at least one of those criteria. They are doing something else, drinking, or whatever young males do these days.

Members post their homemade, generally selfie videos on BookTok. They talk about books, but these are not academic-type conversations. BookTok participants are into the emotional. The most popular BookTokers describe how they react to the books they mention. The more emotional the better. The best way to develop a large list of followers is emote, cry, be overwrought. And, when we talk about a large list of followers we don't mean anything like your Facebook friends, even if you have a thousand of them. Some booktokers count their followers in the hundreds of thousands. A popular video can be viewed millions of times. Booktok videos have been viewed 8 billion times, a number that is growing rapidly. It has only been around slightly over a year.

The type of books these young women and girls favor is not surprising, especially since they like emotional videos. The most popular subjects are romance and fantasy. It is doubtful most stodgy oldtimers and university professors would consider their favored books to be great literature, but they enjoy reading them. What good is a book if it can't make you cry or become frightened? A book that leaves its readers in tears is what will lead to lots of views, and with it, lots of sales. That leads us to another side of the story, and perhaps an inevitable one.

One of the things that makes Booktok popular is its honesty. The feelings are genuine, or at least they appear so. However, whenever someplace attracts a lot of eyeballs, commercialism is almost sure to follow. Over the past year, book publishers began noting an unexpected phenomenon. Some of their books, not very old but maybe published 5-10 years ago with sales on a steady decline, were suddenly flying off the shelves again. What was causing this rebirth? What they found was their books were being reviewed by some popular Booktokers. Popular short book videos were turning into thousands of sales. The marketing departments weren't far behind.

It started with publishers and authors sending out copies of their new books to the popular Booktokers in hopes they would read it, like it, and review it. A few emotional videos could turn a book into a bestseller. Fading older books have reappeared as high as #3 on the New York Times bestseller list based on BookTok videos. More recently, marketers have sometimes moved past the hit-or-miss aspect of sending out free books. Now, some are sending cash. They have deals with video creators and some teenage girls may be raking in thousands of dollars reviewing these promoted books. Their viewers don't know, but they may come to suspect, and that could eat into the trust followers have for the honesty of the emotions expressed on the site.

There are many positive things to be said about BookTok. These younger people may not be reading the greatest literature, but they are reading, and there aren't many people who start by reading Shakespeare. You have to work your way up. And if some never arrive at the greatest literature, reading this lighter fare is better than a lot of other things they could be doing. Along with promoting reading, the site is also an outpost of good behavior. There is little in the way of insults, racist rants, obscenity, the type of stuff we too often see posted by “adults” on various websites. No drugs, no guns, no violence. It isn't filled with conspiracy theories or ugly politics. Rather than these younger folks needing to learn about good literature from those of us who are older, maybe we could learn a thing or two about good manners from them.

Here is a link to see some of these BookTok videos: www.tiktok.com/tag/booktok. Some of them are really quite clever.