“OK Boomer” - Or what I learned from the Pandemic 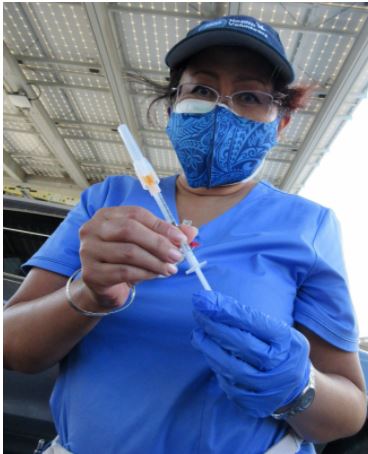 Second Moderna Shot on Feb. 8, 2021 meant an end might be in sight for the Covid pandemic.

It’s been a long year.

Hawaii went into lockdown in March of 2020 and is just now emerging to some semblance of pre-pandemic life. About the world of books there’s not much to tell, but if you’re thinking of a tropical vacation or pricey real estate the Aloha state is insane right now.

Tourism, which stopped dead in its tracks last March, is back bigtime. It didn’t inch up, it returned like the Sack of Rome. On the ground here it’s as if Coney Island and Atlantic City both emptied out simultaneously as a multitude of travelers booked cheap seats to the islands or flew in on their own private jet. The health crisis may not be truly over, but it is clear that the country has decided that this thing has gone on long enough and now they want to party.

Though I got both my shots at the beginning of 2021, I am dubious, to say the least, about the influx. So before we are overwhelmed with some variant strain of the virus brought in by the barbarian hordes, I thought I’d devote some space to what I’ve learned from spending twelve months and counting mostly in isolation.

I don’t know how much of this will be directly book related, but it might prompt you to make a few notes on your own pandemic experiences before the sharp memories fade and you are swept away by the tides of re-entry to a world that is similar, but not the same, as the one we so hurriedly exited last year.

I guess I qualify as elderly. I will be 78 this month, which means I’m old enough to remember when Jeff Bezos and Dick Weatherford were mentioned in the same breath. Weatherford who died recently was the founder of Interloc, one of the early tech innovations which made the internet accessible to book dealers. Jeff Bezos founded Amazon, which began with books, but became the juggernaut that in the end destroyed the book trade as we knew it and replaced it with what?

You’ll have to answer that question for yourself, just to say a year in the house by myself gave me plenty of time to ponder.

So what did I learn?

I learned you can find out anything from Youtube. I learned that even though I put a few bucks into the stock market last May it would have been even better if I’d started investing in March. And media hound that I am, I learned the best source of unfiltered information is Reddit. I became a serious Reddit lurker and addict.

Reddit: they don’t call it the front page of the internet for nothing. One of the highest traffic sites in the world, it consists of a main page and hundreds of linked pages related to specific subjects, known as sub-Reddits. Many have whimsical names like r/FIRE (Financial Independence Retire Early) to r/WCGW (What Could Go Wrong?). Viewers, known as Redditors, can join the groups they find of interest; as items are posted they may vote them up or down and can also add their own comments, which in turn can also be voted up or down. The whole thing is orchestrated by a vast crew of volunteer mods (moderators). The demographic skews to 18-35 young men who like anime and video games, but there are also more sober topics like commercial real estate and investing.

I found when Covid first hit last spring that the news coming through was either not reliable or it was not timely. The subReddit that first caught my interest was r/Coronavirus which had a membership of about 200,000 when I joined and quickly became the go-to place for information coming in from all over the world as the virus spread. As the world struggled to figure out what was happening and what the personal risk was going to be, r/Coronavirus grew rapidly to more than 2 million members.

What was useful about the Reddit info was it was international in scope, it was personal in tone and it was also aggregated in a way that the regular news was not. The comments also had an eyewitness quality. Those who followed this sub soon concluded this was not going to be a short term emergency, but a long haul and for the elderly and those with high risk health conditions the situation would require immediate and likely sustained precautions.

I started reading Reddit for the virus, then I got interested in news related to the stock market and how this younger crowd was using their stimulus money to pump a list of favored stocks, some of them, like GameStop (GME), seemed pretty strange.

My own biggest buzz on Reddit came when I was among the first to notice that the Amazon union election in Bessemer, Alabama was a topic of considerable interest. What started out as a heated local discussion at breakfast between those who thought the union was the obvious right choice and others who just as convincingly predicted that the workers would vote it down (as they indeed did) made me think the subject was of general interest. Early in the day I posted a link to a network news story on Reddit. It soon had a thousand upvotes, by lunch it passed 10,000. By the end of the 24 hour news cycle the total was more than 50,000 plus thousands of comments, again split right down the middle. For hitting the front page I got the digital equivalent of a key to the executive lavatory in the form of karma points.

With plenty of time on my hands on the tech front I learned how to use Google Docs (well sort of) - and dipped a toe into digital audio too. Like the rest of the world I navigated Zoom and other remote audio/video conferences only to conclude it was often dull, although sometimes unintentionally funny.

Truthfully, my own computer skills are not very good, but they were good enough to get me an early appointment for the vaccine. Getting an appointment at the national vaccine portal aka VAMS (Vaccine Administration Management System) was one of the most stressful experiences of my adult life. I had eight  tabs open on the desktop when I finally got to the end of the registration and printed out the QR code that came with a time and place to get the first shot. No wonder the seniors were slow to get in line. Each person needed a working and distinct email address (no sharing) and a smartphone that would accept text messages with code verifications. Yikes.

Yes, I made it to the QR code, only to discover my phone did not have a code reader. Yes, I was in the first batch of elders lining up on the first day. We got our first Moderna shots in the parking lot of the local college. All things considered it went pretty smoothly.

The next day those in their 80s, who absolutely could not navigate the VAMS site, decided enmasse their best option was to “Just show up.” The parking lot turned into a Mr. Magoo cartoon as more than 700 people, most of them aged 75+, converged. Those who got in line early got the shot, the rest missed out.

Like a lot of other small businesses Covid shut me down. By summer I’d mostly stopped selling books. As the only employee of my own small company structured as an S corp, I eventually qualified for unemployment benefits.

If the national vaccine portal was difficult, the state unemployment site was a nightmare. It just crashed and crashed. That was due in part to the fact that it was not technically set up to handle the volume and they only had a skeleton crew to answer the phones. Even today thousands in Hawaii are stranded in a bureaucratic no-man’s land. I was among the lucky ones, after the initial difficulty my benefits came through and all of the stimulus checks arrived promptly.

For me the worst part was the isolation. Living alone, cooking alone, eating alone I was constantly worried that each sneeze or cough was the onset of the dreaded virus. It got old really fast. My garden kept me sane. The roses I got for Christmas bloomed in April. The poinsettias didn’t get the message that they were supposed to go off for the holidays and instead were glorious in March. The times that felt the most normal were the times I spent with a hose in my hand.

There were some remarkable national events that took place while we were all self-isolating.

On May 25, 2020 the whole world saw the video of George Floyd’s death beneath the knee of a white police officer. As I write this the jury has returned a verdict of guilty on all three counts.

On Jan. 5, 2021 I stayed up all night to follow the election returns from Georgia in the heated races for their two US Senate seats. The outcome would determine which party would control the Senate majority. I had a modest bet that both seats would go Blue, and that turned out to be the case.

I was still watching my computer screen the next morning, when what I thought was going to be a purely perfunctory certification of Biden’s victory turned into an armed siege of the nation’s Capitol, complete with real guns and real dead people. Out here in Hawaii it was totally unexpected, a mind blowing experience to watch it as a live feed in real time.

To end on a lighter note, if it had not been for the pandemic, I would never have had the time or patience to learn how to wax my car. I tried Turtle Wax, and was blown away by the results. Just like the Karate Kid, “Wax on Wax Off,” produced spectacular results. Consider this an unsolicited testimonial for their product - I like the super hard shell paste wax in the smaller size.

And finally, I learned Hawaii is wonderful with all the visitors gone. I wish that part could have lasted forever.