The Kenneth W. Rendell Collection on the Detection of Forged Handwriting Donated to the Grolier Club 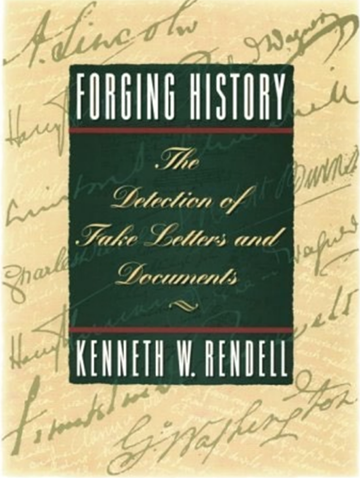 The Grolier Club Library is pleased to announce the receipt of a major gift, the Collection on the Detection of Forged Handwriting, which is the most important and comprehensive collection on the subject known to exist anywhere.  The Gift is from club members Kenneth W. Rendell and Shirley McNerney.

Rendell, a leading dealer in historical letters and documents, has exposed numerous famous forgeries such as the Hitler Diaries fraud, Mussolini’s diaries, the Mormon forgeries and murders [with forger Mark Hofmann], and Jack the Ripper’s forged diary.  This collection was formed over a 60-year period and consists of thousands of forgeries, facsimiles of handwriting, reference books, and archival files concerning major cases in which Rendell has been involved.

The collection is wide-ranging, encompassing historical letters and manuscripts from the early 17th century to the modern day.  Classic forgeries of Shakespeare, Robert Burns, Schiller, Washington, Lincoln, Franklin, Berlioz, Wagner, Poe and numerous others are included.  Rendell made every effort over his long and distinguished career to acquire original examples of past forgers from many sources, including the files of dealers such as Charles Hamilton, Mary Benjamin and Goodspeeds.

The gathering together of so many “original” forgeries – often destroyed and notoriously difficult to collect – alongside genuine examples of handwriting and a specialized reference library, gives the collection unparalleled value for study.  Thanks to the generosity of Rendell and McNerney, these materials will be made widely available to researchers, scholars, librarians, Grolier Club members, dealers, and the public for the first time.

The collection consists of:

10,000 facsimiles of the handwriting of prominent persons from the 17th to the 20th centuries

400 “authorized forgeries” intended to deceive people into thinking they are genuinely signed, usually by an authority figure (e.g., members of royalty, American presidents)

75 “mistaken identities,” in which two different people with the same name living in the same place and time are confused with each other (e.g., two people named John Adams”)

8 linear feet of archival files relating to major forgery cases in which Mr. Rendell was involved, including the Hitler diaries, the Mussolini diary, the Jack the  Ripper diary, the Mormon forgeries, the John F. Kennedy/Cusak fraud, and the Elvis Presley musical manuscript forgeries

Research files and photographs compiled by Rendell for his book, Forging History:  The Detection of Forged Historical Manuscripts (University of Oklahoma Press, 1994)

The gift of the Collection on the Detection of Forged Handwriting also includes a monetary gift to enhance accessibility to the collection through professional cataloguing.  Through their donation to the Grolier Club, Rendell and McNerney have ensured the preservation of this material is a publicly accessible institution, where it can be studied by anyone with an interest in the history, analysis, and detection of forged documents.  We are grateful to them for their foresight and extraordinary generosity.