Some Dr. Seuss Books Will No Longer Be Published 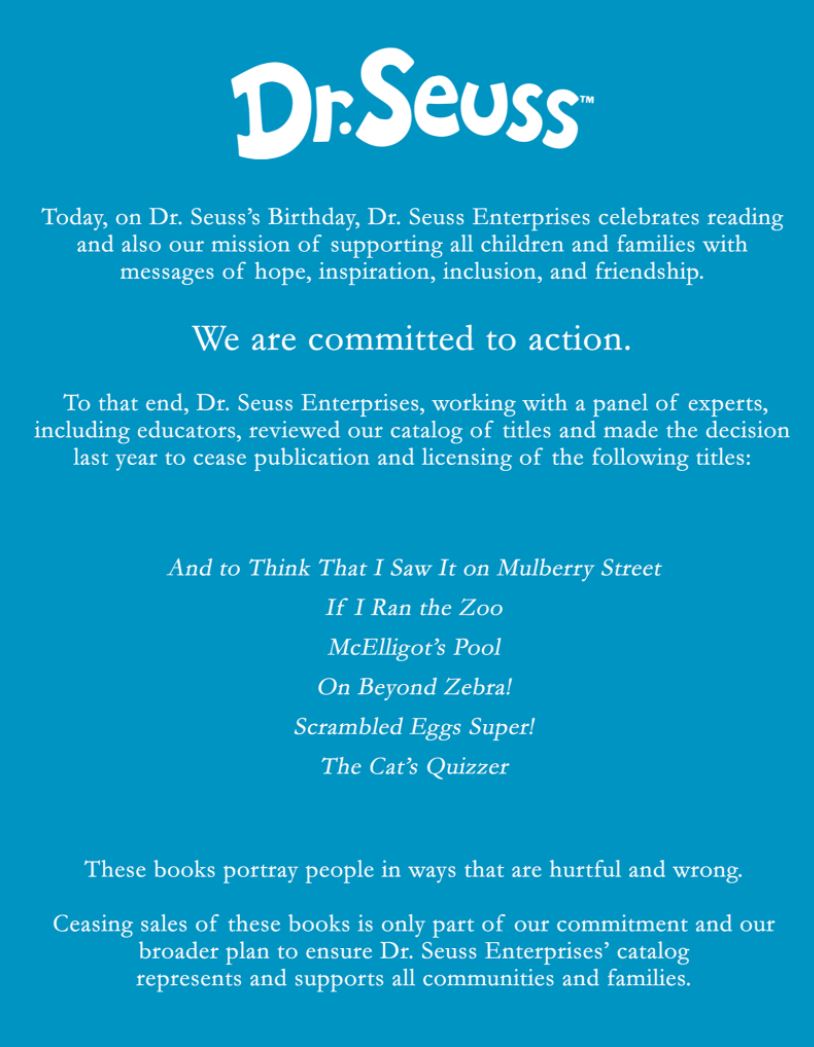 Statement from Dr. Seuss Enterprises on their Facebook page.

Dr. Seuss is in the news again, and sadly as it now always seems, for the wrong reason. Generations of children love his books. He was one of the few authors who could actually make children want to read. When he died in 1991, the “Doctor” was one of the most beloved figures in America, about as non-controversial as they come. His popularity remains high, Forbes Magazine reporting that he is second only to Michael Jackson on the list of “Highest-Paid Dead Celebrities of 2020,” earning an estimated $33 million last year. However, like Jackson, he has become controversial in death, though in my humble opinion, less deservedly so.

Like all of us, Theodor Geisel (his real name) was a product of his times. Times change. Some of his drawings and a few of his words are now deemed anywhere from insensitive to racist, depending on your point of view. A few claims seem to me a bit of a stretch, but some are fair. His early work came in the years before and during the war, and he drew some wartime propaganda. Though Geisel was of German extraction, he was rabidly anti-Nazi. He very much opposed the original “America First” movement. Like most Americans after Pearl Harbor, he became very anti-Japanese. And, like so many Americans, he didn't always see the distinction between Japanese people, including loyal Japanese Americans, and the leaders of wartime Japan.

While few people look at his wartime propaganda anymore, his children's books are still enormously popular, and some of them contain an occasional illustration not up to today's standards. His first book, And to Think that I Saw It on Mulberry Street, depicts an Asian carrying a rice bowl and chopsticks, wearing a conical hat. If I ran the Zoo illustrated a pair of African men barefoot and dressed in a stereotypical way for the time. Some even feel the “Cat in the Hat,” who wears a top hat and bow tie, depicts a character from black-face minstrel shows, though the Cat's face is as pasty-white as they come.

In response to the objections, Dr. Seuss Enterprises, formed by his family to manage Geisel's intellectual property, has decided to stop publishing and licensing six of his books, And to Think that I Saw It on Mulberry Street, If I Ran the Zoo, McElligot's Pool, On Beyond Zebra!, Scrambled Eggs Super!, and The Cat's Quizzer. In a statement, Dr. Seuss Enterprises said, “These books portray people in ways that are hurtful and wrong. Ceasing sales of these books is only part of our commitment and our broader plan to ensure Dr. Seuss Enterprises catalog represents and supports all communities and families.”

This controversy has led to a blowback from those of perhaps a more conservative, or less sensitive point of view. They see it as political correctness run amok, an example of the so-called “cancel culture,” canceling the work of a beloved children's author. Some, sadly, approve of the negative stereotypes and are using Seuss to promote their own prejudices. What should we make of this? What would Dr. Seuss think?

Seuss would undoubtedly he horrified. He was not a bigoted man. He was well ahead of his times in terms of tolerance and respect for others. He was strongly anti-Nazi and the original “America First” as he was appalled by what they did to Jews. He was a sympathetic to African Americans. His anti-Japanese attitudes were molded by the circumstances of that particular time. He did support the internment of Japanese Americans, but so did Franklin Roosevelt, who like Seuss, was very progressive for his time. Some things are hard to see in the moment. Seuss struggled with his anti-Japanese sentiments, but in time came to recognize them. A decade after the war, he visited Japan, and dedicated his tolerance promoting book, Horton Hears a Who!, to a Japanese friend. He was a good and tolerant man, and if some of his drawings or words seem insensitive today, neither he nor much of anyone else (other then, perhaps, the minorities portrayed) would have understood it as such in his day. If Blacks were occasionally depicted in subservient roles, that was the reality of America in his time. Quaker Oats only finally retired “Aunt Jemima” a few weeks ago. Depicting Blacks as slaves in the Antebellum South wouldn't be so much demeaning as picturing reality. Blacks in Uncle Tom's Cabin are shown in demeaning roles, but Harriet Beecher Stowe was trying to explain the horror of the roles they were forced to play.

How should we handle this issue? I think the best answer would be to ask what Dr. Seuss would do if he were here today. The answer, I believe, is similar to what other great and good people would do if they were alive today. George Washington owned slaves, but he would hardly be promoting slavery if he were here now. Even Lincoln tolerated slavery and wasn't sure African Americans were necessarily “equal in all respects,” though that would not be his opinion today. Even the Bible sanctioned slavery (and lots of other terrible things) but few religions are taking that position today. And if Seuss were alive now, he would not depict minorities in ways we now see as disrespectful. That is not who he was. If we are to judge Seuss harshly, then we must recognize that a hundred years from now, people will judge us as racist and other such bad things for reasons we can't even recognize today.

Rather than banning some of his beloved books, I believe Seuss would have done something much more logical. He would have adjusted his drawings to remove the offending images, and portray all people in a positive, respectful manner. So, in honor of the man, shouldn't we do the same? Can't we remove the offending images from his drawings, excise the few offensive words? Maybe Geisel can't do it himself, but I am sure he would be happy to have us do it for him, so future children can relive the joy of Mulberry Street. That could be done with a minimum amount of change, preserving the books essentially as Geisel wrote and drew them. After all, even Roald Dahl, certainly less progressive than Geisel, revised his “Oompa Loompas” who were originally black African pygmies who ate caterpillars, enslaved in the Chocolate factory, when it became clear how grossly insensitive that was. This is a far better solution than throwing out all the good with the small amount of bad.