Finding Shakespeare and Pocahontas with the Aid of Rare Book Hub and Further Research! 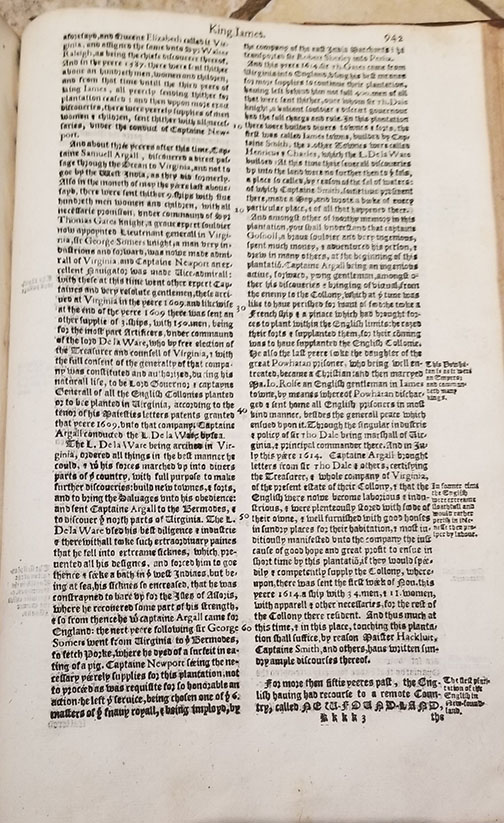 I usually buy Paper and not Books per se. However my interest is in contemporary  reportage so I include printed English Chronicles from the 16th and 17th century such as Abbot, Purchas, Cooper, Carion, etc. These often went into future editions and those later editions would bring the reader up until the time of printing...News!

Sometimes one printer would die and a second would take up the new editions with fresh material from around the globe.

I was key word searching English Chronicles on RBH and one such Chronicle caught my attention. It was Stow's posthumous edition printed in 1615. RBH had descriptions of this edition in their vast database and one of them mentioned that there is a rather rare mention of William Shakespere as one of many CURRENT and illustrious English Poets.

Also, being printed in 1615 there were pretty good chances that there would be "News" about Jamestown. RBH gave me the exact page that contained the Bard.

I went online and found a 1615 edition and paid around $1,000 dollars for it. When it arrived via Post, I couldn't wait to dig in and so in my parked car, I proceeded to rip up the well taped box with my hands.

I already knew about the beautifully engraved title page with portraits including the ruling monarch James I, but would Jamestown be within the contents?"

Rather than going strictly in a timeline as others do, it goes through the list of the Monarchy so James I is near the end of this almost 1,000 page folio. I went page by page through James looking for Jamestown and then bingo! There was a report on Virginia! Now, would it contain history ala Jamestown in 1609 or News ala 1614?

I started reading about Roanoke in 1590 and settlement in 1609 and then there were passages about the tiny colony (always less than 400 people in those days) in 1610 then 1611 and then I saw the words and "in this present yeare..."

What followed thrilled me! An account fresh off the ship (only available in one rare pamphlet) about the marriage of Powhatan's daughter with Master John Rolfe of Jamestown! Wow!

To make things better...the pamphlet mentioned above left off in July of 1614 though also printed in 1615. The Stow had news of the departure of something like 33 men and 11 women on a ship bound for the first permanent English colony in November of 1614...freshest news in print!

A few days after my discoveries, I came across an exhaustive timeline of Pocahontas in print from 1608 to well into the 20th century...In all, over 2000 entries!! It was carefully compiled by a Lehigh University professor named Edward Gallagher. The Stow was not listed!

I emailed the Professor (now retired) and being a gentleman, he got back to me the next day...it was "News" to him and he congratulated me on the find!

Thanks to RBH for starting me on this wonderful trail! Thanks to Shakespeare and Pocahontas for continuing my 55 years in collecting with wonder and affection!