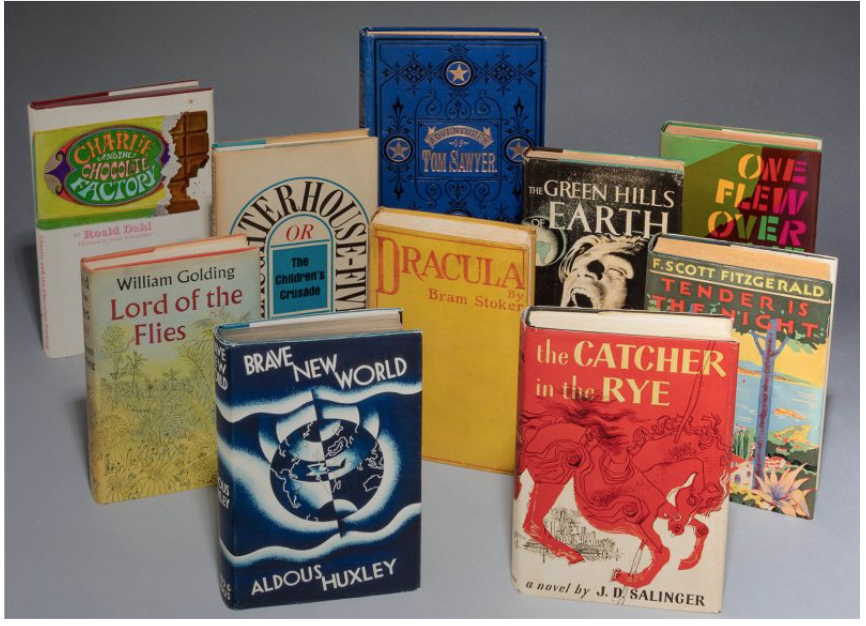 The Hindman Company of Chicago and Palm Beach is offering an appealing sale of Literature from a Private New Orleans Collection on March 19th.   The material spans many eras but it will be unmistakably familiar to those who seriously read late 19th and 20th century fiction.

Books can be collectible for many reasons; for personal relevance, as reminders of what we studied and appreciated, as fun as well as investments.  Within the 265 lots offered all the bases are covered.

By price, there are some lots that will declare victory if they reach $300 while others will reach into the low 5 figures.  There will be many factors, among them rarity, provenance, whether signed, as well as their importance, condition and the presence of DUST COVERS all will determine value.

Having mentioned the many factors affecting value, auction estimating is ultimately alchemy and the Hindman estimates tend to be on the low side to encourage bidders to be hopeful.  Hence, if you find interesting examples allow to bid a bit higher for those lots you really want.

Overall, this auction reads to me as a survey course of long appreciated literature that has a bias to feeling rather than to action.  Gunfights and war sagas not so much.  One of my favorite books in this sale is by Shirley Jackson, The Lottery and other stories, and that book did not need to have a gun to frame both violence and emotional turmoil.  My family owned newspapers and understood that conflicts of ideas cause violence.  And that’s just one of the lots.

To think about what’s in the sale make a list of important authors of American fiction.  You’ll find a majority of them in alphabetical order.  Here goes:

Sherwood Anderson, James Baldwin, Frank L. Baum, Charles Bukowski, William Burroughs and the other Beats.  Into the C’s Truman Capote’s In Cold Blood is required reading.  And there is Clemens, Samuel.  And then William Faulkner and so on and on.

So find something that appeals and then log-in, sign-up, and ask questions.  These books will be familiar to you and it will be fun to buy a few examples  after which you can add a line to your resume:  In your free time?  A book collector!!!

Also attached is Hindman’s brief announcement of the sale.  It’s just a click away.

CHICAGO – Hindman Auctions will present Literature from a Private New Orleans Collection at auction on March 19. The sale includes several of the most significant literary works of the 19th and 20th centuries, representing both American and English literature. Strengths of the collection include early science fiction, children’s literature, and works from the Jazz Age and Post-War period. The sale features the works of John Steinbeck, F. Scott Fitzgerald, Ernest Hemingway, Herman Melville, and James Joyce.

Highlights from the sale include a presentation copy of John Steinbeck’s The Pastures of Heaven (lot 237; estimate is $10,000-15,000) in the rare first issue dust jacket. Owned by American author and Steinbeck correspondent Louis Paul, the work also includes an autograph note from Steinbeck to Paul. The sale includes a very fine copy of Roald Dahl’s Charlie and the Chocolate Factory (lot 40, estimate is $2,000- 3,000).

Bidding for the March 19 sale begins at 10am CT. Bidders will be able to participate via absentee bid, by phone, or live online through the Digital Bid Room. Preview of the auction will be available by appointment only at Hindman’s Chicago office. For more information about the auction, please view the catalogue and the auction page.

Here's a link to the house: