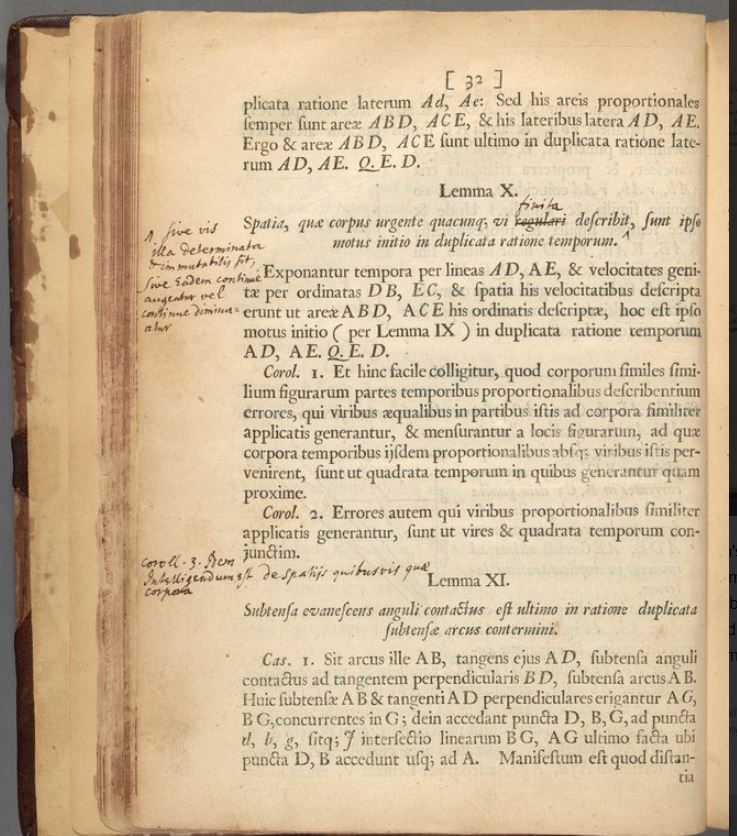 The Huntington Library's Principia, with notes in Newton's handwriting (from Caltech website).

If you are wondering where you can find a first edition of Isaac Newton's Principia, in fact, where you can locate every known copy still in existence, a preliminary report issued last fall will give you an answer. The full title of Newton's masterpiece is Philosophiae Naturalis Principia Mathematica, the authors of this census Mordechai Feingold of Caltech and his former student, Andrej Svorencík, now of the University of Mannheim. They have been at this project for ten years, and the number of copies they already have located is astonishing. It is more than the prior general consensus was for the total number of copies printed.

The last prior census was conducted by Henry Macomber in 1953. He located 189 copies and concluded there were probably around 250 printed. Feingold and Svorencík have already found 387 copies, laying Macomber's estimate to waste. Current estimates of the print run have been revised to 600-750 though the authors put it at 600-650. These figures are determined by comparing the number of known copies of other similarly old books to their known print runs to calculate those runs for books where the number is unknown.

Dr. Feingold was quoted on the Caltech website as saying, “We felt like Sherlock Holmes.” Indeed they must have, except that these investigators had to search the whole world, not just London. One of the surprises was the location of 35 copies behind the old “Iron Curtain” of central Europe. Svorencík is a native of the Czech Republic, and his suggestion to search this area led to the unexpected result. Macomber had not been able to search these countries when they were Soviet satellites behind the curtain in 1953. Macomber's census located 189 copies in 16 countries while Feingold-Svorencík located 387 copies in 27 countries. However, they were unable to determine the current location of 13 copies contained in Macomber's census.

Feingold and Svorencík discovered something else through their census. It had long been believed that only the elitist of minds ever read Newton's Principia, supported by the small number of copies believed to have been printed. They no longer believe that to be true, based on both the quantity of books printed and notes they found in many of the copies they examined. It turns out that more people were sufficiently educated in that time to understand what Newton was saying. Clearly, some struggled with understanding the text, but they apparently persevered until gathering a reasonable understanding. In their report, A preliminary census of copies of the first edition of Newton’s Principia (1687), the authors state, “...it is already possible to conclude: the first edition of the Principia reached a far broader readership than traditionally assumed – both in England and abroad; hence the need to revise received scholarly understanding, which underplay the influence of Newtonian ideas on continental science before the 1730s.”

Newton's Principia is noted for laying out the laws of motion and establishing the universality of gravity, it being the same throughout the universe. To many, he is noted for establishing the scientific method, learning though observation, as opposed to pure rationalism, logical thought trumping observation, and through religion, belief founded in faith and the bible more than observation. This was not his intention. Newton was a deeply religious man and believed that showing the self-functioning orderliness of the universe proved the existence of God, rather than the opposite. Who else could have done this? He even left room for his laws occasionally not working so well, so as to require there be an involved God to intervene once in a while to keep the machine on track. Otherwise, God would not be necessary, other than for Creation, and then be on His way. This side of Newton is little known by many, mainly because he didn't publish it, though he kept voluminous writings on religious subjects that were not revealed until much later, after his death. While being very religious, some of his opinions were unorthodox and could have caused him much trouble (he did not believe in the Trinity), so he kept his mouth shut.

Places where the authors located books were Europe (including the central “Iron Curtain” countries), England (UK) and Ireland, the United States and Canada, Australia, Japan, Russia, Ukraine, South Africa, and the Vatican. Their preliminary report, including the locations and descriptions of all copies they located, can be found by clicking here.