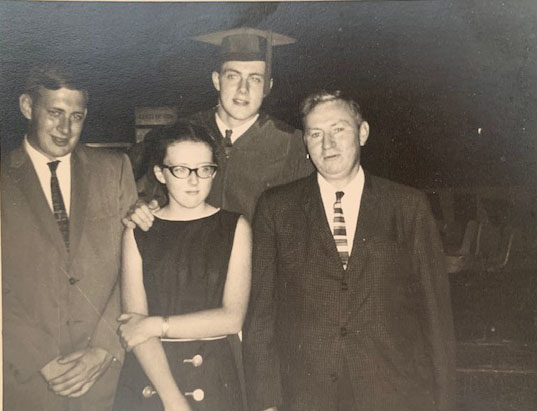 T. Craig McKinney, had a life-long love affair with old books and the sundry paraphernalia around them.   He found them in attics, basements, garage sales, at country auctions and antique shops.  It was his avocation.  He was a newspaperman first and foremost but found time on weekends to look for gems to sell to area dealers.  He loved the chase and it was inevitable his shelves would be packed with interesting things when he recently slipped away.

“T.” was my brother and many were the finds we located together in the 1960’s and 1970’s when only one of us was old enough to have a driver’s license.  He was the older brother.  At the Gates of Heaven these days no doubt, he’s bending God’s ear about when “he stumbled on the Nepahwin estate” in Newburgh in Orange County and God would be taking a deep breath saying “Jesus.”  Their private library was to be sold in 1967+/-.  It was advertised in the Newburgh Evening News.  On the morning of the sale the auctioneer, who like most other local auctioneers did not favor books, setting rules for inspection before the sale:  “you get 5 minutes inside to decide how much to bid and, if successful, 3 days to get them out.  Get the damn stuff out of here soon.”  The library ran from the front to back of the house so we also looked through the windows on both sides to decide what to bid.  Craig and I could come up with $300 and figured we’d win.  Lo and behold the bidding starts and the paddles went up to $700.  My God, that was crazy.  After which, we walked over to the winning bidder to congratulate him and he quickly admitted he was financially stretched and offered to sell us anything we wanted for fifty cents a book.  Our interest was local history and bought about 130 county and local histories for $65. For us that was a wonderful day.  That was all we really wanted.  Old books was a fun pursuit.

Over the years since, we would ritually retell that story and every year the library got bigger and the books got better.  The excitement lingers.

Another wonderful opportunity in those days we had were Cal Smith’s auctions in Pleasant Valley.  Cal must have once been an elementary school teacher because he always called his crowds “boys and girls” and that was how he’d open his book sales early to get the bulk lots disposed quickly.  The best part of those sales were the fellas you met who would smile and cajole while trying to pick your pocket if you bought a bargain and would accept a quick double.  I didn’t sell though except to Rad Curdy, who never offered money, only trades and I still have things on my walls I swapped with him fifty years ago.  Rad Curdy was a collector-historian, an absolute maven, who encouraged fellow-sufferers of old book mania.

As well there was a truly once-in-a-lifetime rare book opportunity when the Saint Andrews Monastery just north of Poughkeepsie was being closed and liquidated.  Rad told me about it and I went to see the church father who was managing the disposal of old furniture, bric a brac  and it turned out, their gymnasium-sized library, stuffed, cheek by jowl, with ancient texts and manuscripts.  Power was in short supply but when I went to see the library the church father let me in one late afternoon as the sun was shining across the library from its high windows.  The material was astounding, the volumes and manuscripts deep in dust, and I knew it would be sacrilege to buy any of the religious texts and both Craig and I decided not to be involved with them.  Luckily, there was a separate section, two shelves of local history and later bought them.  I routinely asked for a signed receipt, and the State Police later found a copy at the Monastery and called several months later to learn about the books I bought.  To them I explained we knew the religious texts should not be touched and later bought only the local history.  This satisfied them.  That transaction was for a dollar a piece as I recall.

I believe later remnants of that institutional collection was offered at Freeman’s in Philadelphia as part of the dispersal of some of the St. Andrews material given to St. Aloysius nearby and I bid on a few items for old time’s sake.  That sale is in Rare Book Hub’s Transactions+.

I was involved in old books before my brother, and in time became a collector and later the founder of The Americana Exchange and Rare Book Hub, but it was Craig who would go on to be a life-long book scout and many were the times years later we’d out exaggerate each other over dinner about the bountiful treasures we found when young for pennies that would some day pay for substantial things.  For him, the real treasure though he found in old books weren’t the gems he could hold, read and describe, rather it was things he could do for others with money he earned when he let them go.

While he was a newspaper writer his real interest was in being an advocate for disadvantaged youth.  He never made any real money.  That made the books he found his “helpful money” and were usually sold too soon and too cheap because he often wanted to help someone.

Ultimately, he become the inadvertent owner of almost hundred years of bound editions of the weekly newspapers in southern Ulster our parents bought in 1951.  The oldest paper dated from 1885 and the others were started in 1890, 1922, and 1924 and 1935.  He took over the Hudson Valley Newspapers from our Mother in 1980 and in the 1990’s sold their bound volumes to the New York State Library, using the proceeds to pay tuition for a family he was assisting. Those volumes can be found online today and the children he helped are living better lives because he invested in their educations.

All those many books and newspapers he touched over his years seem to have a left a lasting glow about his life.