Just Out: The Rare Book Hub List of Top 500 Prices Paid for Books and Paper at Auction in 2020 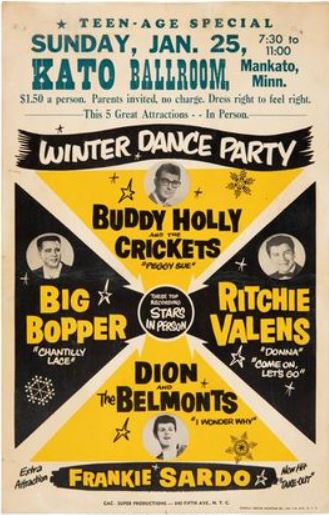 Shortly before “the day the music died.”

It is time once again to look back at the Rare Book Hub Top 500 prices paid at auction for books and paper in the past year. And, what a year it was! It was a year of enormous change, though not perhaps for the obvious reason – the impact of the coronavirus pandemic. What stands out is the increasing evolution of the field away from books to ephemeral paper, often items more visual than textual, more easily displayed.

Elsewhere in this issue of Rare Book Monthly, Susan Benne of the ABAA (Antiquarian Booksellers Association of America) points out that this trend has not been missed by traditional booksellers. She notes, “What was once an association of book and manuscript sellers has evolved to encompass maps, prints, ephemera, zines, and other facets of material culture.” To those we can add comics and sports cards. The growth in appearances of these types of paper collectibles has been explosive over the past few years, especially during the last year.

In 2020, comics, a few strips but mainly original boards and illustrations, grabbed 76 spots in the Top 500. A few years ago, original art was mostly represented by illustrations for traditional books, names such as John Tenniel, Arthur Rackham, Maurice Sendak, and E. H. Shepard. Of them only Shepard appeared on the list, one time, at the bottom. Meanwhile, the work of comic book illustrators proliferated.

In recent years, the number of baseball cards on the list has been inching up; this time they took a mile. There are 56 baseball cards on the list. It's no longer just the old rarities – Ty Cobb, Honus Wagner, and Babe Ruth. Now there are numerous cards from still active ballplayers, a sign that they are not very old. Players like Albert Pujols and Mike Trout make the list. Even Francisco Lindor, whose team, the Cleveland soon-to-be-something-other-than Indians, reportedly is trying to trade, is here. His nine-year-old rookie card sold for $102,000. Some of these are “Fractor” cards, manufactured in very small quantities to guarantee rarity. In Lindor's case, it was a “Superfractor” card, of which only one was made. It assures one-of-a-kind rarity. The mark-up on these must be astounding. The popularity of these cards is even more surprising as baseball is no longer as popular as it once was, no longer the dominating “national pastime.”

It is not just baseball cards that are bringing astonishing prices. Unheard of on this list a few years ago, for 2020 there were 25 basketball cards, with Michael Jordan, and in particular, the still active LeBron James, leading the way. Hockey struggles to find an audience on TV, but there were six hockey cards, one of which exceeded $1 million. All six featured Wayne Gretzky. Surprisingly, America's most popular spectator sport, football, was the least represented major sport, with only four. Only one of these was for an active player, Patrick Mahomes, the others being Jim Thorpe, Red Grange, and an unopened set of 1962 cards. There was even a soccer card, of - no surprise - Pele.

Then, there were a few collectible cards outside of sports figures. Four on this year's list were Pokemon cards.

Original movie posters also proved to be popular this year. There were 14 of these, all classics, not recent films. There were three posters for rock concerts, one for the Beatles, one for the Winter Dance Party tour which included Buddy Holly, Richie Valens and the Big Bopper, along with Dion and the Belmonts, and the virtually unknown Frankie Sardo. A few days later, the first three died in a plane crash, “the day the music died,” traveling to their next stop, while Dion and his group along with Sardo wisely took the bus. Today, Dion still survives, 80 years old with a lifetime of music the others were not able to create behind him. The third poster is for a concert packed with '50s stars put on by the coiner of the term “rock 'n' roll” to describe the music, DJ Alan Freed.

We should point out here that we limit the listings of two forms of collectible paper, prints and photographs, to those a historic nature. Those created as works of art are left off as art is a different category in a world of its own (in other words, it would totally dominate this field if included). If art prints were included, Andy Warhol would have left little room for other forms of works on paper. His impact has long been thus. Sixty-two of his prints would have qualified for the Top 500 prices. New this year is the absolutely explosive growth in qualifying prices that would have gone to Banksy. From a handful in the past, he or she would have had 58 prints in this year's list. Banksy's Girl with Balloon alone would have qualified for 11 listings. He/she should print off some more. Ever since he/she commented “I can't believe you morons actually buy this sh*t,” Banksy's work has been flying out the doors at five and six-figure prices. Banksy knows how to close a sale.

We also do not include paintings and similar artwork with the exception of those that were created specifically to be used as illustrations in a book.

Some traditional names associated with books do still appear, though even here, the most prolific are collected more for their art than words. Audubon shows up 16 times, same as the previous year, mostly for plates taken from his double-elephant folio Birds of America. This year, flower artist Pierre-Joseph Redouté appears 23 times, mostly through original artwork for his Les Liliacées, versus only two in 2019. Great job, P. J.

The always in-demand Charles Darwin appears five times, down from 10 the year before. That was better than Charles Dickens, a regular to these lists, who was here six times last year. He didn't make it at all this time. The increasingly popular Ian Fleming is on the list five times compared to zero the previous year. American regulars Washington and Lincoln show up six and four times respectively. Meanwhile, Lincoln's predecessor as President, James Buchanan, makes his first appearance on one of these lists through a campaign banner. Buchanan makes no one's list of great Presidents. Shakespeare is here again with five listings, same as the year before. It isn't as many as LeBron James at seven, but how many championship rings does Shakespeare have? It's not even close to Batman, who is here ten times, but Shakespeare had no super powers either. And now Pokemon is breathing down his neck. Sorry, Bill.

All this may seem odd, perhaps disconcerting to traditionalists. Popular culture seems to be controlling today, rather than what was once thought of as “cultural” or of importance. I will admit to not feeling quite right that Senator Richard Henry Lee's letter to George Washington, informing him that he had just been elected as the first President of the United States, is valued at less than a slew of ball cards and comic books, but the invisible hand of the marketplace works in mysterious ways. Perhaps most surprising to me are the five Lou Gehrig items on this list. Three are his baseball cards, sold for $264,000, $111,000, and $78,000, while two of his baseball contracts went for $138,000 and $111,000. One other Gehrig item appears on this list, though at the bottom, for $75,000. It is a four-page letter he wrote to his doctor and it concerns what Gehrig is most known for today, and it doesn't concern sports and games. It describes his personal battle with Amyotrophic Lateral Sclerosis (ALS), the tragic illness now known as “Lou Gehrig's Disease” which took his life. This seems of so much more significance than his baseball cards but who is to say? Each generation gets to make its own choice of what is valuable and as always, it is a moving target.

There is one bright spot for traditionalists in this list. Among all the sports cards, comics, and illustrations, at the very top of this list is a book, a traditional book, all text, no plates, no in-book illustrations, just words. It sold for more than six times as much as the second most expensive item. Move over, Batman. There is still a place for great literature.

Here are the Top 10 highest prices paid at auction this past year, followed by a link to the full Top 500 list.

7. La Harpe Manuscript Map of Louisiana by Jean-Baptiste Bénard de la Harpe, circa 1722-1725. One of two known extant copies of this map of Louisiana when only its southernmost territory was known to Europeans. $875,000.

1. Mr. William Shakespeare's Comedies, Histories & Tragedies, better known as the First Folio. Published in 1623, seven years after Shakespeare died, it was put together by a few of his friends to preserve the plays of the Bard. It contains 36 plays, 18 of which would have been lost forever had his friends not published copies of these unpublished gems. Macbeth, The Twelfth Night, and Julius Caesar are among those that would have been lost. Shakespeare wanted to perform his plays, but took little care to preserve them. The greatest work of English literature, perhaps of that in any language. A most deserving #1. $9,978,000.

Here is a link to the entire Rare Book Hub Top 500.

Addendum: we missed a couple of items that were included in a Christie's art sale. They are:

The Almanac Book of Hours, use of Rome, an illuminated manuscript from the 1490s by Master of the Monypenny Breviary and associates. $2,088,000.