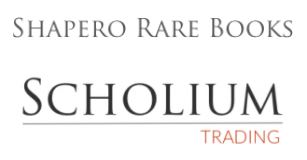 Scholium Group, the publicly traded parent of Shapero Rare Books, posted a loss for the first half of their fiscal year, running from April 1 – September 30, 2020. It came as no surprise. The handwriting was on the wall after a loss in March when much of Britain was forced to close down by the coronavirus. Chairman Jasper Allen even displayed some relief in the company's performance, noting “the Group has performed at a better level than the Board's expectations earlier this year.”

The loss for the past six months at Scholium came to £158,000 (US $212,000). This is down from a profit of £64,000 during the same period in 2019. Sales were down for all three of Scholium's divisions, though Shapero Rare Books proved to be the strongest. Shapero's sales declined by 6%. Sales for its Mayflower Philatelics division, which hosts stamp auctions, dropped by 22%, while those at Scholium Trading practically disappeared, declining by 97%. Scholium Trading conducts joint ventures with other companies in selling very expensive collectibles. Shapero Rare Books by itself eked out a small profit.

Shapero's relatively good performance was attributed to its being able to expand its online business significantly, while its profits were also attributable to reducing costs. This has not been a good time for practically any book selling business, but Shapero's method of selling was particularly hard hit. They traditionally do much of their selling through their retail location in London and at book fairs. Retail was slow, and at times nonexistent because of forced closures, while practically all book fairs have been cancelled since March. If there is a possible bright side to all of this, it's that there is a good chance the increased online sales will be a permanent feature of the business even after Covid 19 is gone.

In looking to the next half year, Scholium pointed to greater focus on online platforms and use of email and telephone communications as positives. The firm has moved its showroom to less expensive quarters to reduce expenses. They also noted that their balance sheet remains strong. Nonetheless, realism necessitated forecasting continued losses. They cited a return to a government enforced retail shutdown and continued cancellations of trade fairs as road blocks in the way going forward. All of that is true, but one suspects if shops were allowed to reopen, and fairs did the same, few people would attend anyway. It looks as if we are facing a brutal winter of infections and deaths, and while the vaccine should help turn things around in the second half of their fiscal year, it likely is too late to make much of a difference between here and March. They will need to continue the cost cutting and virtual selling to minimize the losses until relief comes and they can get back on the positive track the firm had established before the coronavirus hit.