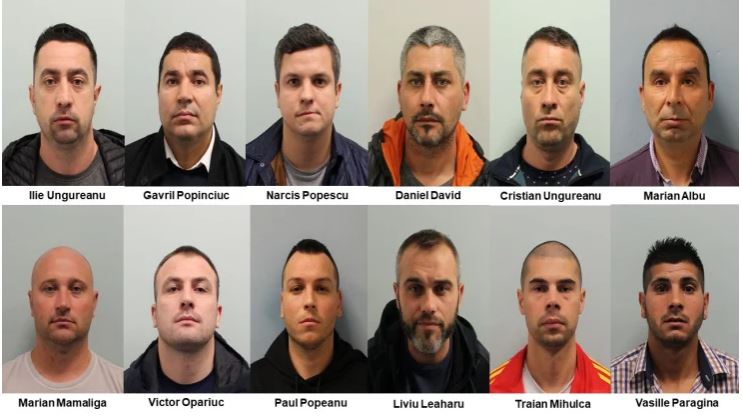 The day of reckoning finally arrived for 12 of the participants in the extraordinary “Mission Impossible” book theft in January 2017. That was when three of them climbed down a rope from a skylight in a London warehouse and rose back up 5 hours later with over 200 rare and valuable books. As to why they chose to remove them that way, other than the obvious that the books did not belong to them, the answer was to avoid the alarm sensors which were all aimed at the doors. The valuable rare books, belonging to two dealers from Italy and one from Germany, were in the warehouse awaiting shipment to the annual ABAA California Antiquarian Book Fair in Oakland that year.

The mysterious thieves turned out to be part of a Romanian crime syndicate. They had Romanian national accomplices in England, but the planning was carried out by people living in Romania. It still hasn't been explained how they knew exactly what books were in the warehouse, but they entered with a list and proceeded to the boxes containing those books. They opened the boxes, sorted through the books, and took only those on their list. Their actions in the warehouse that night were recorded by security cameras which, unlike the alarm sensors, were aimed to capture activity within the warehouse beyond the doors. When their activities inside were finished for the night, and they had lifted out the boxes of books they wanted and climbed back up the ropes, the thieves sped away in a waiting van.

This was not the only theft carried out by the syndicate, but it was by far the largest. They also made similar warehouse entries to steal more obviously salable items, such as computers and smart phones. The books, though of much higher value, would be harder to sell as likely buyers of rare books, such as dealers or auction houses, would carefully check to confirm the books' history and run them against stolen book lists before purchasing them. It makes one think they were stolen on behalf of some particular collector or other person with a specific use for the books.

The members of the syndicate each had their roles and worked as a team. The plans were hatched in Romania and then those who were to steal the books flew to London. Once the theft was completed, they quickly caught a plane and flew back out. Meanwhile, the van driver took the books to a house in the country where they were handled separately. A driver then came through the Eurotunnel from Romania in a different van and drove the books out of the country.

Michael Phillips, of the Crown Prosecution Service, noted, “These 12 criminals used their wide network to try and fully legitimize their actions where challenged. They regularly transported goods between England and Romania to try to cover their tracks and avoid being caught. What’s more, they purposely committed crimes outside of their homeland in order to keep a ‘safe’ haven.” Unfortunately for them, they also left just enough DNA to lead to their identification. Mr. Phillips explained, “these criminals left a chain of clues allowing the police to piece together vital strands of evidence that has seen them convicted and sentenced today. On the third burglary, a drink can left at the scene contained a DNA match to Daniel David. On the sixth, a balaclava left behind had a DNA match with Vasille Ionel Paragina. On the eighth, a half-drunk bottle of milk was found with DNA matching Paul Popeanu.”

The DNA evidence, along with information gathered by law enforcement services in Romania and Italy, led to the arrests of the 12 defendants over the past year. Part of what helped crack the ring was that authorities located a cache of computers when they were brought into Romania without documentation that they had been purchased. However, it was not until this past September 16 that the books were finally located, hidden under the floor of a house in Romania.

The 12 defendants who pleaded guilty were sentenced on October 1 and 2. Their sentences were as follows:

- Marian Mamaliga, 34, from Romania, who pleaded guilty on July 8, was sentenced to four years imprisonment.

- Daniel David, 37, from Romania, who pleaded guilty on February 17, was sentenced to three years and seven months imprisonment.

- Paul Popeanu, 35, of Rossgate, Hemel Hempstead, who pleaded guilty on February 17, was sentenced to three years and three months’ imprisonment.

- Gavril Popinciuc, 45, from Romania, pleaded guilty on June 24, was sentenced to five years and eight months imprisonment. Described as overseeing and controlling the operation, he received the longest sentence.

- Cristian Ungureanu, 41, from Romania, but extradited from Italy, pleaded guilty on July 8 and was sentenced to five years and one month imprisonment. He had a leading role and was present at the scene of the burglaries.

- Narcis Popescu, 34, from Romania, who pleaded guilty on February 17, was sentenced to four years and two months imprisonment. He rented the house in Balham, South London, where the books were temporarily stored.

- Victor Opariuc, 29, from Romania, who pleaded guilty on February 17, was sentenced to three years and seven months imprisonment. He was one of the men who abseiled into the warehouse that night.

- Ilie Ungureanu, 33, from Romania, but extradited from Germany, pleaded guilty on June 24, was sentenced to three years and eight months imprisonment. The younger brother of Cristian Ungureanu, he oversaw removal of the books from England.

The total of the sentences came to 48 years and 5 months.

Commenting on the successful ending of this case, Metropolitan Police Detective Inspector Andy Durham stated, “These sentences bring a successful conclusion to a complicated three year investigation, which identified and convicted a previously unknown Romanian organized crime gang. For over two years, this gang commuted from Romania into the UK, targeting warehouses across the country, causing huge financial losses and even forcing some to close as a result. They gave no consideration to the victims they targeted, and I am proud the Met investigation team, working with the Romanian National Police and the Italian Carabinieri, have brought their offending to an end.”