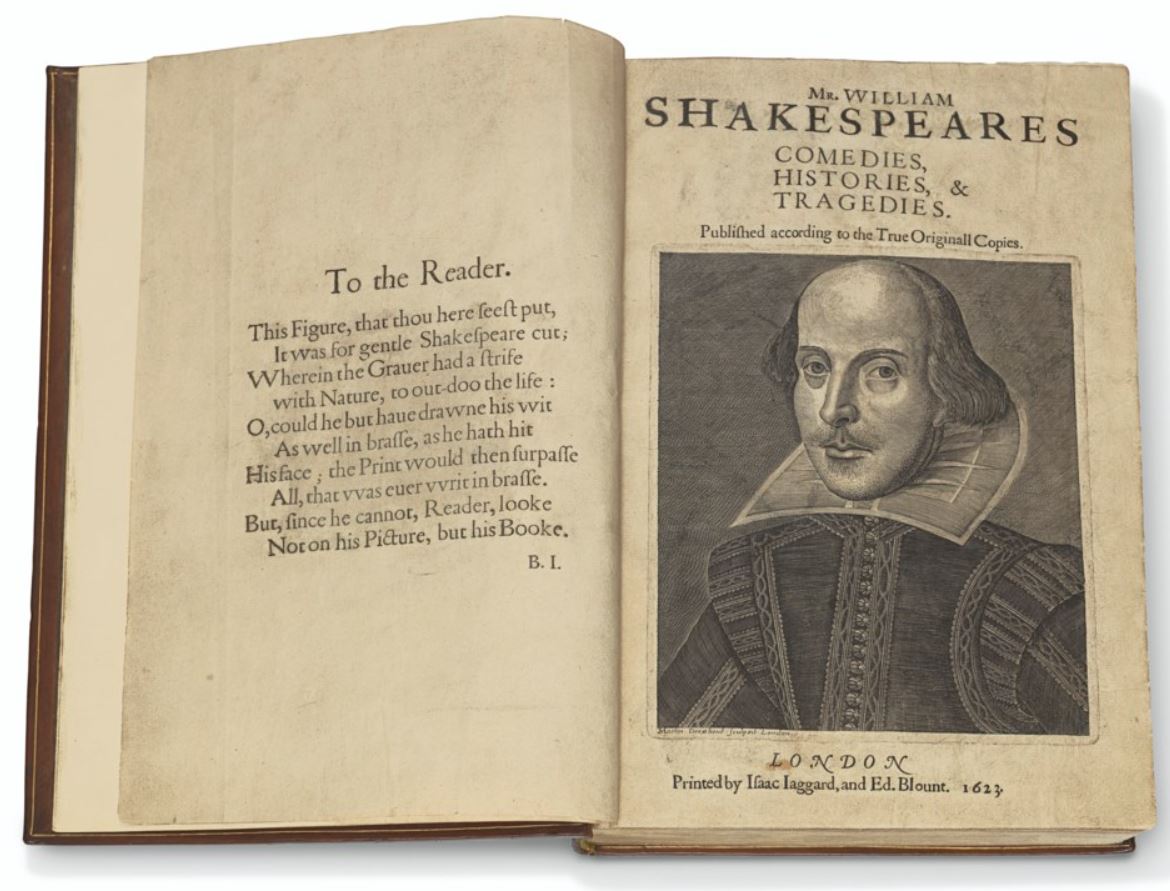 A copy of the first edition of William Shakespeare's Comedies, Histories, & Tragedies, better known as the “First Folio,” sold at Christie's on October 14 for a record-smashing price of just a hair under $10 million. The hammer price was $9,978,000. Margaret Ford, Christie's International Head of Group, Books & Manuscripts, London said, “Christie’s is delighted to have established a new world auction record not only for a work by William Shakespeare, but for any work of literature.”

Of course, the First Folio is not just any work of literature. It is undoubtedly the most important literary work in the English language, perhaps any. Published in 1623, seven years after Shakespeare died, it contains 36 of Shakespeare's plays, 18 of which might have been lost forever were it not for this edition. Among those that might have been lost are Macbeth, The Twelfth Night, and Julius Caesar. Shakespeare wrote his plays for production, not reading or preservation. The result was that many of his plays were never published during his lifetime. Fellow actors and friends of Shakespeare John Heminge and Henry Condell realized years after his death that his plays might well be lost forever if they didn't publish them while scripts still existed, hence the creation of this monumentally important work.

The First Folio is rare and extremely difficult to obtain. The original print run is believed to have been around 750 copies. Of these, 235 are known to still exist. The great majority are in institutions. The Folger Shakespeare Library in Washington incredibly owns 82 of them. According to Christie's, only six complete copies remain in private hands. Over the years, they get bought up by institutions and placed in permanent collections. This copy was a rare exception in that it migrated from an institution back to a private buyer. It belonged to Mills College, a small, private, mostly women's college in Oakland, California. It was given to Mills in 1977 by Mary Louise and James O'Brien in honor of her father, Elias Olan James. Elias James was a professor of English literature at Mills College during the first half of the twentieth century.

Unfortunately, like many smaller, private colleges, Mills has had a hard time financially in recent years. Declining applications and admissions, exacerbated by an increasing percentage of students from low income families, put the college into multi-million dollar deficits. In 2017, the the administration declared a “financial emergency.” That led to a restructuring of the curriculum to better appeal to prospective students and the sale of what the college conceded was a “precious asset.” Mills is not the first, nor will they be the last, to incur this sort of a dilemma and the hard choices it generates. They decided to sell their First Folio.

As painful as the decision must have been, Mills must have been pleased with the outcome. Christie's estimate, which reflected earlier valuations, was that it would sell for $4-$6 million. It blew that number away. The sale took six minutes as three telephone bidders battled for the winning bid. Once the others bowed out, the hammer came down at $9,978,000 all in. The winning bidder was Stephen Loewentheil of the 19th Century Rare Book & Photograph Shop. Christie's quoted Mr. Loewentheil as saying, “William Shakespeare is incomparably the greatest writer in the English language and one of most important international cultural influencers in all history. The First Folio is the most important collection of plays ever published and revered throughout the world. It is an honor to purchase one of only a handful of complete copies of this epochal volume. It will ultimately serve as a centerpiece of a great collection of intellectual achievements of man.”