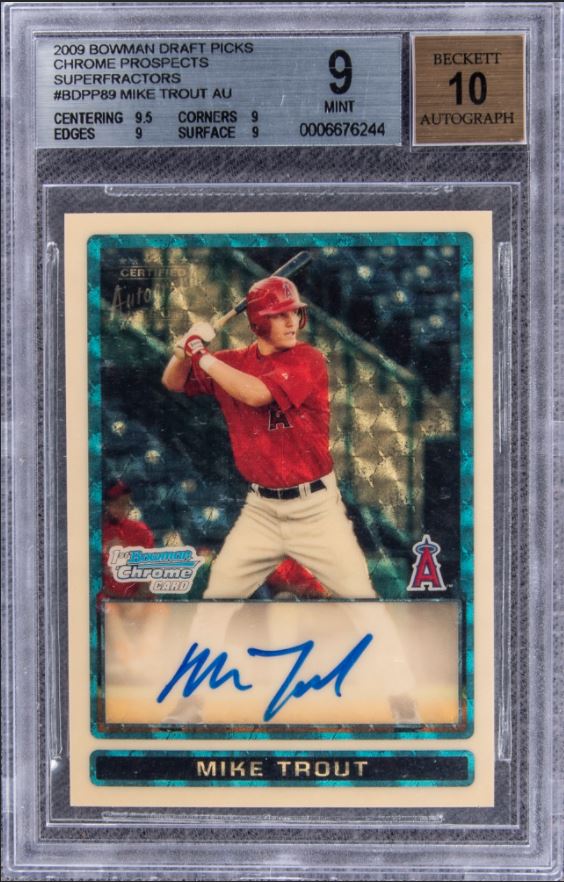 Move over Honus Wagner. Wagner, the turn-of-the-century baseball player for the Pittsburgh Pirates, has long ruled the collectible works on paper field known as baseball cards. We used to flip these in a contest with our friends (for many, our introduction to the joys of gambling). We bought them in packs of 5 for a nickel (with a free piece of bubblegum to boot). Now they have become multi-million dollar collectibles with an industry to support them. Times have changed.

In 2016, a T-206 Honus Wagner card sold for an astounding $3.12 million. Originally, it didn't even cost five for a nickel. It was given away as a premium in packs of cigarettes by the American Tobacco Co. between 1909-1911. It is a rarity though not extremely so. There are 57 in existence. It's relative rarity is attributable to the objection of Wagner himself, a nonsmoker. The astronomical price for this particular card is due to it being in superb condition, evidently never flipped by a boy's hands.

This record was recently broken by an even rarer baseball card, though it has little in common with the type of baseball cards we used to collect. This one was rare from the get-go, what, in the book world we call a “limited edition,” or some, less charitably, refer to as a “manufactured rarity.” Exactly why someone would pay so much money for a card produced just 11 years ago for a player still active in the big leagues is a mystery to me. Sure, Mike Trout is an unusually good ballplayer, a sure-fire hall of famer, perhaps the greatest player of his generation. Still, $3.936 million for a relatively recent baseball card seems totally absurd to those who think of baseball cards as a kid's toy. Even though this is a rookie card, inherently more valuable for ballplayers who go on to be great, and that Trout has signed it, almost $4 million still seems a bit steep. Indeed, in 2018 this card sold for a mere $400,000, and wasn't that an amazing investment!

Baseball cards have changed a lot since my youth. Topps is still the popular brand, but now they have luxury models to go along with the plain old cards we knew. This card is from the “Bowman Chrome” collection. These are cards mostly produced during a player's rookie season, and often are autographed by him. Naturally, if you buy one of these for a player who later turns into a star, say, Mike Trout, then you've got something special. On top of this, there is something known as “Refractor” cards. These have a rainbow finish that stands out depending on how the card is turned. A Bowman Chrome Refractor is evidently better than an ordinary Bowman Chrome, or an ordinary Refractor. Then, within these, there are different print runs, ranging from five to a couple of hundred. Goldin Auctions, which sold this recent record-breaker, sold one of these one-of-five Mike Trout Refractors, #5/5, last spring for a whopping $922,500.

But wait. There is a higher level still. There is something called a SuperFractor. Of these, there is but one. There is some sort of gold coloring in the background, but probably not real gold as gold is not worth anywhere near as much as these baseball cards. So, it was the 2009 Mike Trout SuperFractor Topps Bowman Chrome card #1/1 that came up for sale at Goldin Auctions with a minimum bid of $1 million. Such a low minimum was not needed. There were 20 bids in the online auction that met that minimum, and when the final bidder saved the other 19 from themselves, the bid was $3,936,000. You could buy a mansion on the beach for that. Most people will never make more than a fraction of that much money in their lives. When the masses arise and demand the confiscation of the wealth of the rich, they will point to this act of decadence as proof they don't need all that money. I'm sure it's a nice baseball card, but seriously, it's still a baseball card. It could be a SupercaliFractor-expialidocious card and it still wouldn't justify spending $3.936 million on a baseball card. What is wrong with people?