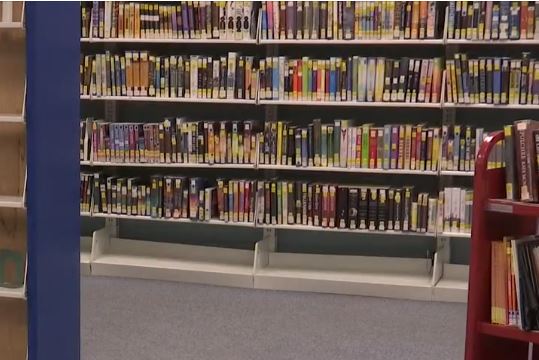 Books removed from the bottom shelves after flooding.

These are difficult times for everyone. Covid 19 has brought much of the world to its knees. In America, climatic disasters seem to have become the norm. Hurricanes and tropical storms in formerly unknown numbers, baking heat and raging forest fires along the west coast, and flooding rivers in the Midwest have become routine with no particular reason to think it will change any time soon. Meanwhile, the nation is more divided than at any time since the Civil War with an election looming that may widen that gap even farther.

Under such circumstances, the affect on libraries may seem almost trivial. Peoples lives, livelihoods, health and homes are more pressing needs for most. Still, libraries are not immune, as witnessed by the library in Chipley, Florida. Chipley is a town in the Florida Panhandle, part of the Washington County library system. When Hurricane Sally roared by last month, Chipley was one of its victims. As often the case, it was not so much the winds that caused destruction as the flooding that came with it. Such was the case with the Chipley Library where waters rose above the level of its floor.

It wasn't the deepest flooding a library has ever experienced, but at around half a foot, it was sufficient to inundate everything on the lower shelves. Fortunately, books on the upper shelves appear to have survived in good shape. All of the books have been removed from the library. Those that can be saved have been placed in refrigerated trucks for now so that the humidity doesn't do them in the same as those that were soaked. Hundreds, maybe thousands of books from the library's 40,000 volume collection were destroyed, but eventually, after clean-up, the remainder will be able to return. Meanwhile, Chipley's services will be carried on by other branches of the Washington County library system. In positive news, the Chipley Library was fully insured so they will be able to replace the lost books when they reopen.

These sorts of events are not good for traditional libraries, traditional libraries being those that feature physical, touchable books. It isn't hard to notice the advantage of digital books in this instance. There are no hurricanes or forest fires in the cloud. It is peaceful and calm up there. Practicality, if not enjoyment, makes their case. Hopefully, e-books will be a logical alternative rather than a replacement in the years ahead. Many people still like things they can hold, though it is hard to say whether future generations will feel the same. It is a positive development for those who like “real” books that vinyl records have seen something of a resurgence. They can't compete with streaming audio, but vinyl sales now outpace the two generations of electronic advances that first replaced them – cassette tapes and CDs. Nothing is quite the same as the original, and we hope future generations will see it that way with books too.