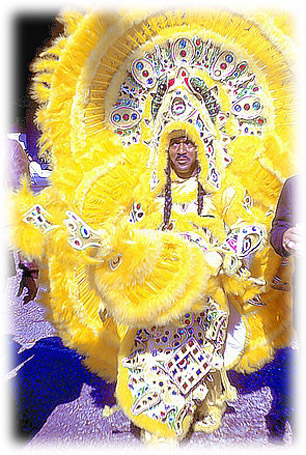 Those who appreciate a good story and some history, whether it is in book form or not, may wish to pause for a moment to remember the life of Allison "Tootie" Montana, chief of the Yellow Pocahontas, one of the tribes of Mardi Gras Indians, of New Orleans. Chief Montana, no relation to Joe of San Francisco, for many years lead this group that for a few days each year celebrates, in the streets, their history by drinking spirits and wearing ceremonial costumes that recall the founding of their honorary tribes after the Civil War when many blacks and their brothers in suffering, native Americans, found in these celebrations a joyful expression of their hard won and hard to maintain freedoms. Chief Montana had been a chief for 53 years and died while attending a New Orleans City Council meeting to discuss a recent St. Joseph's night confrontation between revelers and police. The constables had plenty of proof, some of it 90.

The issue was violence. The tradition of various local tribes such as the White Cloud Hunters, the Golden Eagles, the Wild Magnolias and the Yellow Pocahontas to break laws while upholding time-honored celebratory practices has increasingly gained the attention of the local police who, while respecting the tribes' right to celebrate, do not condone public intoxication or its more extreme outcome: gun fire. In the past year there have been several shootings associated with these celebrations. Mr. Montana appeared at the City Council meeting as Chief of one of the tribes but died before he could deliver his remarks. In death, he has raised awareness of this tradition well beyond anyone's expectation.

In the City Council room, while Mr. Montana lay stricken on the floor, the "other chiefs and spy boys and flag boys and queens of the assembled tribes launched into a somber rendition of "Indian Red," a slow spiritual song that is a staple at Mardi Gras Indian funerals" according to a report carried in the Times-Picayune, a local paper.

The future for these revelries is unclear but the police are on record as both respecting tradition and upholding the law. Being that the site of this issue is New Orleans one can expect a logical and fair outcome. It is in the tradition of the city.

Chief Montana was well known for the ceremonial costumes he created each year. His father, Alfred Montana, was Big Chief before him and his great uncle, Becate Batiste "is often named in histories of the tradition as the founder of one of the first recorded tribes in the city, the Creole Wild West" according to information provided by the Louisiana Folklife Center

They have provided a marvelous online perspective on Chief Montana. To read it follow this link: www.louisianafolklife.org/LT/Virtual_Books/Hes_Prettiest/hes_the_prettiest_tootie_montana.html.

National Public Radio also recently did an audio commentary on this story and a link is provided here for those who would like to listen to it at their computer: www.npr.org/templates/story/story.php?storyID=4757132

For those who are interested to acquire printed material on the "Mardi Gras Indians" I ran a keyword search on ABE and found 21 items. W. Adolphe Roberts' "Brave Mardi Gras [a New Orleans novel of the 1860's] looks collectible and, at $40, an inexpensive way to get started.