Paradise Lost and Found - The Discovery of America 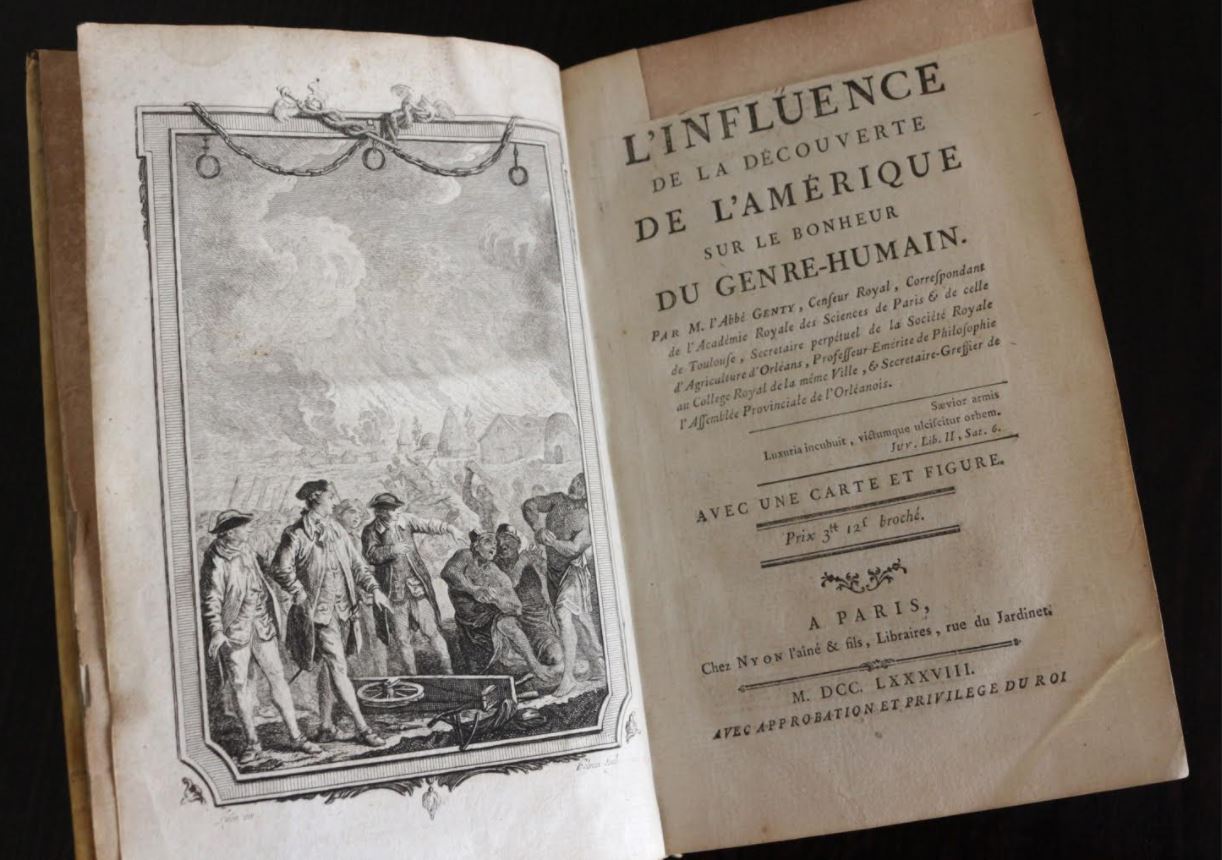 Was the discovery of America a blessing or a curse? In 1788, Louis Gentil wrote a book to answer this (rhetorical) question.

During the recent confinement, half of the world came to a halt for several months. People in Europe were given time to reflect upon their lives and their priorities. Everybody started to hope for a “new world”, a new way of living and thinking. Would Man, despite all his sins, be able to make a new start—if wearing a mask? Of course not. There will be no “new world”, and this opportunity will be wasted like all others, including the discovery of America by the Europeans. At the time it was yet a brand new terrestrial Paradise to them! And it was full of pagans to convert—halleluiah!—and of natural resources to exploit. But at the end of the day, did it make Man happier?

L’Influence de la Découverte de l’Amérique sur le Bonheur du Genre Humain / The Influence of the Discovery of America on Happiness (Paris, 1788) is an in-8° volume that comes with a frontispiece and an anonymous folding map of America taken from another body of work dedicated to the discoveries of the Dutch in America—with the indication “Tome1 Page 450” in the top right-hand corner. A former owner of the copy I came across had two bad ideas. First, he cut off a part of the title page to remove the ex-libris of a former owner—a common idiotic practice. Then, he covered the boards of the books with a poor quality paper—a less common but arguably more idiotic practice. I easily took the latter off and discovered a full-vellum binding with traces of old handwritings! Did I feel like a conquistador finding a new world! And I must confess that it did make me a happier man—at least for a few glorious minutes.

Louis Gentil was teaching philosophy, and he had clearly read and enjoyed L’Abbé Raynal’s A History of the Two Indies, which is a political rewriting of the discovery of the New World from a “philosophical” point of view—Diderot wrote the abolitionist parts of it. But Gentil was moderate. Unlike Rousseau, he didn’t buy the myth of the “good savage” perverted by society. To him, the Native Americans were bloodthirsty and stupid people lost in the wilderness. “Only the love of paradox and novelty could drive a clever writer to state that wild life is superior to a social one,” he writes. His second chapter is entitled: Did the discovery of the New World benefit its first inhabitants? This is but a rhetorical question. Ferdinand’s greed and thirst for power were, he says, responsible for the pains endured by the Natives. Then he reflects upon the brutality of the conquistadores and comes to the conclusion that “never had brutal passions so completely silenced the voice of God in the hearts of Man.” The Europeans, he says, should have “submitted the Natives through the wonders of our arts, our goodness and our virtue.” But not only did the Europeans fail to spread the Gospel of Christ among the Natives, but they “made them less happy, and more wicked; and have almost totally destroyed them.”

The discovery clearly didn’t benefit its first inhabitants. What about the new ones, then? Gentil writes pages on the unfortunate condition of the African slaves and comes up with a, well—surprising, solution: “Alas! Slavery will only end with the progressive and total extinction of the Negro race.” Beg your pardon? “The slaves will gladly close their eyes as they shall last see our mistake and our rage as we shall have no more victims to make!” All right—it sure sounds better this way.

Not even the Europeans became happier after the discovery of America. All the gold they brought back only fed the pride and ambition of the European monarchs, who set the whole continent on fire. About Charles V, Gentil writes something that sounds surprising today: “And we still bow to the statues that were erected to flatter him!” The impact that the discovery of the New World had on Europe, especially in the field of trade, is the most fascinating part of the book. A man of his time, Gentil firmly believed in free trade. It would bring prosperity, peace and understanding. Two hundred years later, we can see how wrong the “Lumières” were on that particular point—but Gentil had partly seen it coming: “Nowadays, because of the possessions of the European nations in the New World, we have a new kind of wars, trade wars!” They have never stopped since. Furthermore, the sudden growth of trade and travels created a new breed of “rootless men”, “who are strangers everywhere, who have no concern over cults, political or moral principles, who are used to challenge the public opinion as well as the laws.” Trade had already started to erase the concept of nation. At the end of the day, only the Republic of Holland reaped the good fruits of the New World—because it was mainly a traders’ nation? Nevertheless, Louis Gentil wanted to be positive, so he gave us some solutions to find back the path to happiness. The recent independence of America was a sign, and this new-born country—another “new paradise”— would no doubt become “a shelter for the persecuted Europeans, the oppressed Natives and the runaway slaves.” Well... Another wasted one, then.

Violence is at the root of every nation. But discovering America was like opening the gates of an unspoilt garden—everything there remained to be done. And Man had learnt from his mistakes, so he could do things properly this time. Redemption was at hand—but we know what happened next. The snake bounced on us again, tempting us with another apple—his idiotic practice. And we were far too easy to corrupt, as usual. As if Man was never to find happiness in this “old” world.