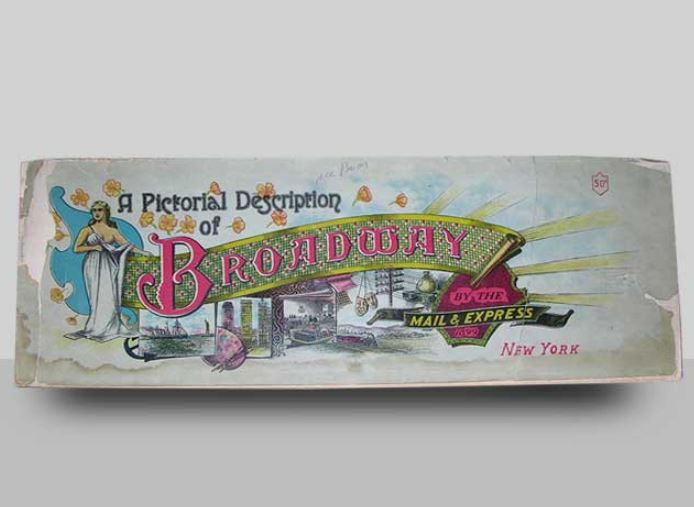 A Pictorial Description of Broadway in 1899.

AbeBooks has announced its Top 10 highest prices paid for books on their website during the second quarter of 2020. There is something for everyone here, at least everyone with a healthy amount of money to spend. Here they are:

10. Anatomia uteri humani gravidi tabulis illustrate, by William Hunter, published in 1774. That translates to “the anatomy of the human uterus exhibited in figures.” Not much more needs to be said about that. It's a gynecological masterpiece. $9,750.

9. Casino Royale, by Ian Fleming, published in 1953. A good price for a first edition, first printing in fine condition with a near fine dust jacket of this highly collectible first James Bond book. Under $10,000 (sort of). $9,999.

6. Heures D'Anne De Bretagne, a 2012 facsimile edition. The title translates to “Hours of Anne of Brittany.” Anne was the only woman to be Queen Consort of France twice, first married to Charles VIII, and after he died, to his cousin, Louis XII. $11,120.

5. A Pictorial Description of Broadway, published in 1899 by the Mail & Express Co. A block-by-block look at turn-of-the-century Broadway published by the publisher of the New York Evening Mail. That newspaper disappeared in 1924 after merging with the Evening Telegram. $14,000.

4. An Historical Account of the Expedition against the Ohio Indians, by William Smith, published in 1765. An account of Henry Bouquet's negotiations for peace with the Ohio Indians on behalf of Britain. Smith wrote it from Bouquet's notes after the latter died. This copy belonged to Peter Muhlenberg, reverend, Revolutionary War soldier and officer, and Pennsylvania senator. For John Prine fans, Muhlenberg County, Kentucky, is named for him. $14,785.

3. The Whetstone of Witte, whiche is the Seconde Parte of Arithmetike: containyng thextraction of rootes: the cossike practise, with the rule of equation: and the woorkes of surde nombers, by Robert Recorde, published in 1557. If you find mathematical equations witty, this book is good for some laughs, but for the rest of us, it is complicated math. This is one of the first books on algebra. Recorde invented the equals sign. An imperfect copy. $14,950.

2. The Adventures of Tom Sawyer, by Mark Twain, published in 1876. First edition, first printing of this American classic. $17,500.