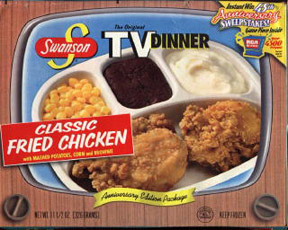 A man who touched the lives of almost all Americans over the past fifty years died on July 21st, at the age of 83. He probably lived that long in part because he didn't like to eat what he invented - the TV dinner. He was Gerry Thomas, a salesman for C. Swanson and Sons and he developed the idea of single portion meals, wrapped in aluminum foil, which could be heated in the oven and served in 25 minutes and the idea caught on.

Young minds of course need to be nourished too and I can remember reading the TV dinner boxes while we waited for the Salisbury steak and fried chicken to be ready. I remember counting the letters in the longest words of the listed ingredients and even at eight could tell all these letters were hiding something and ever since have avoided ingredients that sound like dinosaur names.

Today we may watch more television than we did then but we are no longer so naive. The puppy we adopted fifty years ago has become the snarling monster that demands for 8 of every 30 viewing minutes that we buy, vote or hate something. Many can remember John Cameron Swayze and the Camel News Caravan. He had his ashtray right next to his script. Mr. Thomas's dinners date to that era. Our television entered the house in 1954 but was not immediately accorded a special place. Some people had them in their bedrooms and others in their basements but in 1954, when Mr. Thomas took the fateful steps that earned him a headline obituary across the country 61 years later, the place of television in our homes and lives was just coming into focus. He put televisions into living rooms by providing the key element in the "dining theatre" model, the TV dinner. Mr. Thomas, at least for some, changed people's orientation to TV for he created a meal for the working mother that let her relax even while the food was cooking. That made it possible to mix a high-ball and watch the news. I remember very clearly my Mother announcing that we are going to use the accumulating Empire Market Green Stamps to buy a matching set of TV trays and I even remember the trip to make this transforming purchase. Television, the exotic element we carried into the house with a burst of excitement a year earlier, was by 1955 starting its stealthy reconstruction of American family dynamics. To my question, "will we ever eat in the dining room again?" my mother smoothly replied "if we need to." Two meals later we were back in the dining room for three reasons: snow, an 11 inch picture screen and a set of chairs that leaned back while the TV trays required you lean forward.

But the TV dinners stayed with us. We just didn't eat them in front of the television. The very gradual breakdown of the nuclear family would continue. Life was starting to speed-up. Meals were becoming more condensed and in time only old timers would remember how it was in the beginning. One of them, Mr. Thomas, has died.

On ABE today I did a keyword search for TV Dinner and the first ones to come up cost the same as the first TV dinners: $1.00. So in case you are a throw-back to that era and both remember how to read and still like to, you have twenty pages of matches to consider.

As for Mr. Thomas' whereabouts tonight I wouldn't want to be his lawyer at the Gates of Heaven. I can hear God saying "If it's so good, why didn't you eat one? And of course Mr. Thomas says, "If that's what you're serving I'm at the wrong place."

If you would like to listen to a recording, and have audio on your computer, click here: Listen