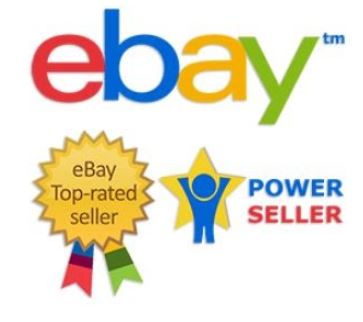 Remember me, your friendly Hawaii antiquarian dealer, frequent Rare Book Hub contributor and long time ‘Power Seller’ on eBay with 1,566 feedback comments and a 100% positive rating? I’ve written twice before on my increasing dissatisfaction with eBay, once in April 2019 and again in June. When I started listing on eBay in 1998 I never dreamed I would still be using it as a sales venue lo these many years later.

I’m flogging this topic again because with their new “managed payment system” eBay seems to have finally rid itself of small sellers like me in favor of the mega-listers and Chinese widget vendors. Rather than go into all the specifics of why this latest wrinkle in the eBay scenario is the last nail in the coffin, I’ll only note that with each passing year the platform took a bigger and bigger piece of my revenues without providing a commensurate return in profitability.

The latest twist is it will jettison Paypal, substitute Adyen, a Dutch company for handling payment and insert its own Big Brotherish corporate presence firmly and permanently between the customer and the seller in ever more new and disagreeable ways.

It’s not worth counting the ways; it’s simply time to go.

July 15th was the deadline the company set for complying with its new edicts which required, among other things, access to the seller’s personal bank account and social security information prior the switch over to the new system sometime later this summer. July 14th was the last day I had active listings on the site. I suspect I won’t even have an inactive presence much longer.

What can I say? I’m pushing 80, I’ve been in the book trade since 1979. I don’t have that much left to sell, and maybe what’s left isn’t worth the time and energy it takes to sell it. Though it was good while it lasted, as a venue eBay has become increasingly complicated, time consuming and less and less profitable.

I’m writing this on July 24, exactly 10 days after I stopped listing and went back to “ye olden days” way of selling things including list-serves, personal contacts, queries to clients, Facebook posts and the like.

So far the news is good. Doing business without eBay I had a strong July. I had to learn some new tech skills; and organize what I have left of my increasingly thin inventory differently, but was it profitable. Yes, absolutely profitable, and it had no commissions, no fees and nobody telling me that I was violating this or that obscure rule. The good part was getting out of my deep and narrow rut, and trying something else. Even better was renewed personal contact with the buyers, talking to them on the phone, corresponding with them by email, getting a sense of their current and future interests.

As a result of eBay’s edict and the Covid lockdown I had plenty of time to think about how I wanted to organize my business going forward. I thought about whether I want to spend my remaining years buying and selling low margin merchandise with shrinking demand and ever more expensive shipping costs? I asked, what else could I do that would be less work with potential for greater gain?

When the stock market hit a new low in March, equities looked attractive, I opened a small account. I was not alone.

As CNBC reported in May, “The major online brokers —Charles Schwab,TD Ameritrade, Etrade and Robinhood — saw new accounts grow as much as 170% in the first quarter, when stocks experienced the fastest bear market and the worst first quarter in history.” How I (or any of the millions of other newbies) will do in the future remains to be seen, but the action is a whole lot swifter and there’s nothing to pack or ship.

In retrospect, what if I had done it that way from the start? If instead of selling on eBay since 1998 (the year it went public) I had instead bought 100 shares of stock at $18? Using that script one source estimated my shares would have been worth $149,478 in July 2018 and even more today - not bad for an $1,800 investment (and certainly more than I’ve ever made as a vendor.)

In case you might be looking a eBay as an investment rather than a place to sell your wares, Yahoo finance reported today,“Shares of eBay EBAY have skyrocketed over 100% since the market’s March 23 lows to thoroughly outpace stay-at-home powers Zoom (ZM) and Netflix (NFLX.) Now the question is should investors consider buying shares of a refocused and slimmed down eBay before its upcoming second quarter earnings release on Tuesday, July 28?”

Just for comparison, a look at Amazon. A thousand dollars worth of Amazon IPO stock purchased in 1997 would have been worth more than $1.58 million in May 2020. How many of you selling on either of those platforms socked away six or seven figure gains in the past 20 years?

We all know hindsight is 20-20, still reviewing the numbers it’s easy to conclude that investing in the stock would have been much more profitable than using their services.

We sell books because we love books, but it’s apparent the world is not going to return to books and bookstores as a way to make money any time soon. I’m sure it isn’t going to come as news to RBH readers that the antiquarian trade is going to be pursued by those with increasingly specialized tastes, and by and large both the buyers and sellers are going to be people who have made their real income somewhere else.

For me, I would have starved long ago without an active real estate license. And now, sticking a toe in the equities market I see the future action is not in the merchandise, and even less in the content, it’s in the platform. If you’re old enough to remember Marshall McLuhan you may recall his mantra was, “The medium is the message.”Or as Forbes wrote today, “Have you heard of Shopify? ... The Coronavirus sparked a wave of Mom-and-Pop stores to shift online. It forced tens of millions of businesses to close their doors for months. And the only way to keep cash coming in was to sell online. Businesses that didn’t even have a rudimentary website were suddenly rushing to set up fully functional internet stores ….. New stores created on Shopify’s platform surged 62% during the lockdowns. And the most shocking stat of all: Stores with a presence on Shopify recouped 94% of lost in-person sales with online orders!”

The BBC was equally euphoric about Shopify writing, “"Technology has levelled the playing field so you don't need to have a lot of money to build a brand that is the envy of hegemonic corporate giants, and the cool part of it is that consumers vote with their wallets and prefer to buy from local merchants.”

Shopify reported its second quarter financials on July 29. They were very strong.

And for those of you who were really there at the beginning of bookselling in the digital age come the sad news via a post from Taylor Bowie that Dick Weatherford passed away on July 20.

Taylor wrote, “Dick’s efforts in bringing the Internet to the book trade via Faxon, Interloc and Alibris helped to change the trade forever and the way we do business in countless ways. It might not be an overstatement to say that no one person during the last 30 years has had more of an impact on the business of selling old, rare, and used books than Richard Morris Weatherford.”

To that I say, Amen.